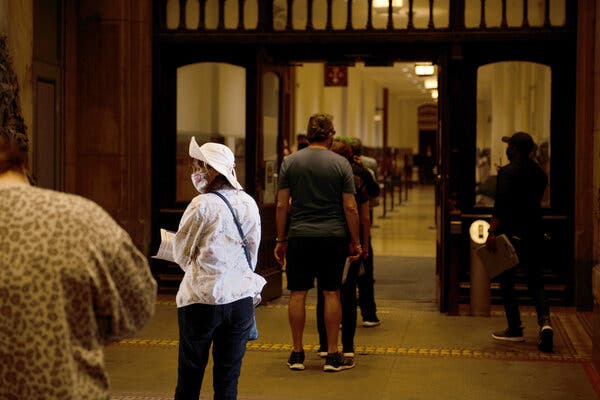 The group of Trump campaign officials came carrying cellphone cameras and a determination to help the president’s re-election efforts in Philadelphia. But they were asked to leave the city’s newly opened satellite election offices on Tuesday after being told local election laws did not permit them to monitor voters coming to request and complete absentee ballots.

On social media and right-wing news sites and in the presidential debate on Tuesday night, President Trump and his campaign quickly suggested nefarious intent in the actions of local election officials, with the president claiming during the debate that “bad things happen in Philadelphia” and urging his supporters everywhere to “go into the polls and watch very carefully.”

The baseless descriptions of the voting process in Philadelphia were the latest broad-brush attempt by the Trump campaign to undermine confidence in this year’s election, a message delivered with an ominous edge at the debate when he advised an extremist group, the Proud Boys, to “stand back and stand by” in his remarks about the election.

The calls for his followers to monitor voting activity are clear. What’s less apparent is how the Trump campaign wants this to play out.

Mr. Trump and his campaign often seem to be working on two tracks, one seemingly an amped-up version of mostly familiar election procedures like poll watching, the other something of a more perilous nature for a democracy.

In the first, Justin Clark, a lawyer for the Trump campaign, told a conservative group this year of plans to “leverage about 50,000 volunteers all the way through, from early vote through Election Day, to be able to watch the polls.” The head of the party in Philadelphia said Wednesday that there would be multiple poll watchers at every site in the city, which would mean at least 1,600 Republican watchers in Philadelphia alone.

Thea McDonald, a spokeswoman for the Trump campaign, said the operation was needed because “Democrats have proven their lack of trustworthiness time and again this election cycle.” She added, “President Trump’s volunteer poll watchers will be trained to ensure all rules are applied equally, all valid ballots are counted, and all Democrat rule-breaking is called out.”

In recent weeks, the Trump campaign has distributed carefully lawyered training videos to prospective poll watchers around the country describing what they can and can’t do while monitoring the voting process, imploring them to be courteous to “even our Democrat friends.” The poll watchers will challenge ballots and the eligibility of voters, but they are not supposed to interact with voters themselves.

Voting rights groups fear that effort could veer toward voter intimidation. But the question is how far Mr. Trump’s supporters will take the exhortations to protect a vote the president has relentlessly, and baselessly, described as being at risk of widespread fraud."