Hope Is Lost' As Police Open Fire On Pro-Reform Protesters In Lagos, Nigeria

“Hope Is Lost' As Police Open Fire On Pro-Reform Protesters In Lagos, Nigeria 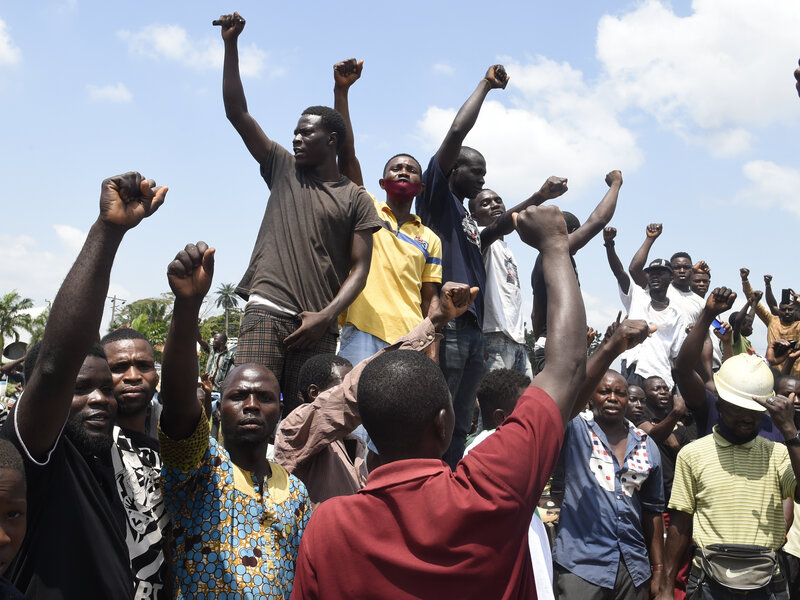 Protesters chant and sing solidarity songs as they barricade barricade the Lagos-Ibadan expressway on Wednesday to protest against police brutality and the killing of protesters by the military, at Magboro, Ogun State, Nigeria.

"I can't even describe it," she said, growing emotional. "It seems like our whole hope is lost."

Oduala has been on the streets of Nigeria with thousands of other young people for about two weeks now. They had been peacefully protesting for an end to police brutality. But on Monday night and into Tuesday, mobs set multiple police stations on fire. The government declared a curfew for 24 hours in Lagos, saying all protesters had to go home by 4 p.m. local time. (The Lagos government announced later that enforcement of the curfew should not begin until 9 p.m. local time.)

Demonstrators were still on streets after 4 p.m. By the time the sun was setting, uniformed security forces opened fire on a huge gathering at Lagos' iconic Lekki bridge.

Live streams on Instagram from musicians who had been supporting the protests showed scores injured, and demonstrators trying to tend to each other's wounds and crying for help. In a statement on Twitter, the governor of Lagos, Babajide Sanwo-Olu, said about two dozen people had been injured and at least one person was killed, not from a gunshot wound but from "blunt for trauma to the head."

Amnesty International said it had received credible reportsthat protesters had died during the siege.

"There are no excuses for the unfortunate incident that took place last night, and as the Governor, I apologize for every action & inaction," he wrote on Twitter.

The attack on protesters was also condemned by human rights groups and the spokesman for the United Nations Secretary-General, who called for an "end to reported police brutality and abuses."

Nigeria's president, Muhammadu Buhari, did not address the nation. But Senator Ita Enang, one of his close advisors, went on national television to defend the actions of security forces.

He said the government has been trying to accommodate the demands of protesters but that they were also intent on restoring public order.

"We are working hard that the situation doesn't deteriorate and this will be perhaps the last bloodshed," he said.

Young protesters first took the streets almost two weeks ago after a video showing a brutal police shooting went viral. They demanded the abolition of a notorious and corrupt anti-robbery police squad known as SARS, and days into the protest, Buhari ordered the unit disbanded. But protesters, who had heard similar promises before, said they wanted prosecutions and an end to corruption.

So, the protests instead grew into the largest Nigeria has seen since the 1980s, when people took the streets to denounce military rule. On some recent days, Lagos, a metropolis of 14 million people, came to standstill.

"Police brutality was just the trigger for these protests," said Cheta Nwanze, a political analyst and lead partner at the consultancy SBM Intelligence.

He notes that in the past few years, Nigeria's unemployment rate has skyrocketed to 27 percent; the underemployment rate is just as high. The pandemic then delivered an already ailing oil economy another blow. A huge proportion of young people — many of whom are college educated — have been lingering at home without any prospects.

Nwanze says now, it's all boiling over.

"So we have frustration that has built up and has basically come to a head," he said.

Oduala, the human rights activist, says that as Nigerians from across the country joined the protests, they became about everyone's frustrations.

She said they had hoped these protests could bring about meaningful change in Nigeria. But, now, all of that is gone.

The government of Nigeria has said it is ready to draft reforms. But as the sun rose Wednesday on Lagos, anger erupted on the streets. Hordes of young people set the Nigerian Ports Authority building on fire; others ransacked the palace of one of the traditional kings of Lagos. Across the city, cars and federal buildings were set on fire.“