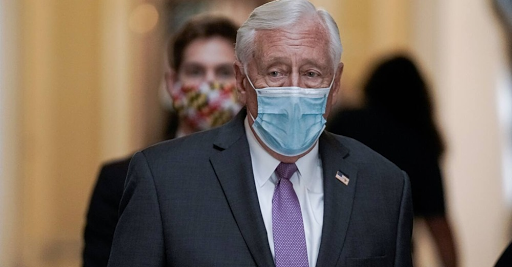 "Senate Majority Leader Mitch McConnell (R-Ky.) told Senate Republicans on Tuesday that he has warned the White House not to make a big stimulus deal before the election, according to two people familiar with his remarks.

McConnell suggested that House Speaker Nancy Pelosi (D-Calif.) is not negotiating in good faith with Treasury Secretary Steven Mnuchin, and any deal they reach could disrupt the Senate’s plans to confirm Amy Coney Barrett to the Supreme Court next week.

In a Bloomberg interview on Tuesday, Pelosi adamantly denied that she was stringing the White House along and said she wouldn’t be negotiating with the White House if she didn’t want a deal.

But McConnell’s remarks, made in a closed-door lunch with Senate Republicans, show the raw political calculations that both parties are dealing with two weeks before the November 3 elections. McConnell’s comments were confirmed by two people familiar with them who spoke on condition of anonymity to discuss them.

McConnell’s stance could kill any chances for passing a new relief deal in the two weeks left before the election. He has made his opposition clear to a new deal in the $2 trillion range Pelosi and Mnuchin are discussing. McConnell told reporters Tuesday that if such a deal were reached and passed by the House with President Trump’s support, he would put it on the Senate floor “at some point.”

McConnell did not commit to a vote before the election and his private comments to GOP senators suggested there would not be one.

McConnell’s remarks came as Pelosi and Mnuchin were locked in last-ditch negotiations aimed at reaching a deal Trump says he wants to pass before the election.

In the Bloomberg interview, Pelosi said she has insisted that the White House and Democrats bring forward their best offers by the end of the day so they can examine key differences for a final phase of negotiations.

She also said that if they are going to vote on a deal by the end of next week, they need to agree on specific language by the end of this week. She described herself as “optimistic” but said key differences remain, particularly on business liability protections and state aid.

“It isn’t that this day is the day we would have a deal,” Pelosi said. “It’s a day when we would have our terms on the table to be able to go to the next step. Legislation takes a long time.”

In addition to the negotiations, there’s also a flurry of public posturing by all sides, much of it conflicting. Trump said Tuesday morning on “Fox and Friends” that he wants an agreement with an even larger price-tag than the $2.2 trillion Pelosi has proposed, while alleging the House speaker does not want to reach a deal. Pelosi has said this isn’t true, but added that she’s getting mixed messages from Republicans, with Trump wanting a giant spending bill and Senate lawmakers demanding something much smaller.

Trump, for his part, has brushed aside complaints from Senate Republicans and said they will ultimately back a package if he tells them to.

“It’s very simple: I want to do it even bigger than the Democrats. Not every Republican agrees with me, but they will,” Trump said. “They’ll be on board if something comes.”

“I’d take all the votes you could get, whether it’s Democrat or Republican,” Trump said.

But McConnell did not commit to a vote before the election. And he declined to say whether he’d spoken with Trump about the issue or whether Senate Republicans would support such legislation.

“We’d have to see what it was first,” McConnell said.

Many Senate Republicans oppose a massive new spending bill and McConnell is not eager to hold a vote that would divide his conference just before the election, when most Senate Republicans want attention focused on the Barrett nomination.