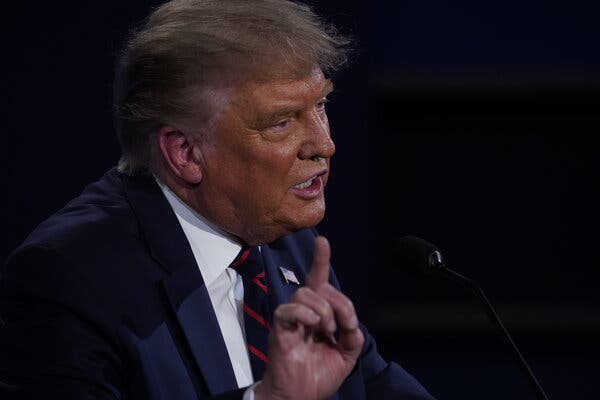 For the second time in two weeks, Republicans distanced themselves from the president, expressing unease about his failure to disavow a right-wing organization linked with white supremacy and acts of violence.

President Trump’s refusal to condemn an extremist right-wing group in his first debate with Joseph R. Biden Jr. sent a shudder through the Republican Party at a critical moment in the 2020 campaign on Wednesday, as prominent lawmakers expressed unease about Mr. Trump’s conduct amid mounting fears that it could damage the party on Election Day.

It was the second time in two weeks that a collection of party leaders broke with Mr. Trump over behavior they regarded as beyond the pale. Last week, Republicans distanced themselves from Mr. Trump’s unwillingness to promise a peaceful transfer of power if he loses the election.

This time, the subject was racist extremism and the president’s response to a demand from Mr. Biden during Tuesday night’s debate that he denounce the Proud Boys, an organization linked with white supremacy and acts of violence. Mr. Trump answered by telling the group to “stand back and stand by,” a message taken by members of the organization as a virtual endorsement.

On Wednesday, Senator Mitch McConnell of Kentucky, the majority leader, called it “unacceptable not to condemn white supremacists,” without criticizing Mr. Trump by name, while Senator Lindsey Graham of South Carolina said the president should “make it clear Proud Boys is a racist organization antithetical to American ideals.”

The exchange on white supremacy provided one of the most inflammatory moments of a debate that unfolded as a chaotic spectacle, as Mr. Trump hijacked the proceedings with interruptions and mockery that left elected officials, foreign observers, business leaders, rank-and-file voters, the moderator and one of the two candidates onstage agog at the unseemly antics of a sitting president. The behavior prompted the commission that oversees presidential debates to say it would make changes to the format for this year’s remaining matchups, including, potentially, the ability to shut off a candidate’s microphone.

Mr. Trump’s unruliness — which provoked Mr. Biden into calling the president a “clown” and telling him to “shut up” — threatened to tear new schisms in his political coalition and reinforce the reservations about the president’s character and leadership already held by much of the electorate.

Representative Tom Cole of Oklahoma, a veteran Republican lawmaker and a Native American, said in an interview that Mr. Trump should denounce the Proud Boys and other extremist groups in clear language.

“All he has to say is, ‘There’s no place for racial intolerance in this country,’ and be very forceful about it,” Mr. Cole said.

Senator Tim Scott of South Carolina, one of two Black Republicans in Congress, suggested that perhaps Mr. Trump “misspoke” and urged him to fix his error. But Mr. Scott also allowed, “If he doesn’t correct it, I guess he didn’t misspeak.”

Mr. Trump, in a brief encounter with reporters Wednesday afternoon, tried to contain the damage while stopping well short of a full reversal of his stance. Reprising a ploy familiar from past controversies, Mr. Trump insisted he did not know anything about the group, though he made no suggestion to that effect during the debate.

“I don’t know who the Proud Boys are,” Mr. Trump said. “I mean, you’ll have to give me a definition because I really don’t know who they are. I can only say they have to stand down, let law enforcement do their work.”

Mr. Trump also claimed he had “always denounced any form” of white supremacist ideology, even though he has repeatedly resisted denouncing specific extremist figures and has regularly echoed the rhetoric of racist and far-right organizations.

The way he handled the question about the Proud Boys echoed one of his most brazen evasions over right-wing racism from the 2016 campaign: When the former Ku Klux Klan leader David Duke supported his candidacy, Mr. Trump at first declined to explicitly disavow the support and said he did not know who Mr. Duke was.

In addition to his comments about the Proud Boys during the debate, Mr. Trump again attacked the legitimacy of the election, floating conspiracy theories about mail-in voting and encouraging his supporters to police polling places on Election Day. There was no sign that he had been swayed by Republican criticism of his past refusals to commit to a peaceful transfer of power.

Mr. Trump’s debate provocations were all the more dangerous politically because they came at a moment when he is trailing in polls of key swing states and millions of Americans are about to vote. Thirty states have either started early voting or begun sending out mail-in ballots.

Within the Republican Party, Mr. Trump’s unwillingness to give a broad and forceful denunciation of right-wing extremism and white supremacy evoked the most damaging episodes of his presidency, like his equivocal response to a 2017 violent white-supremacist march in Charlottesville, Va.

Still, there was no sign of a full Republican retreat from Mr. Trump, who throughout his term has been treated by most of his party as all but above reproach. Even those who dissented with Mr. Trump on Wednesday did not directly rebuke him, a longstanding approach that spares them blowback from conservative voters and the president himself.

Some officials accused the news media of clinging to an irrelevant issue.

“How many times does he have to say it if the question is, ‘Would you denounce it’ and the answer is yes?” said Representative Kevin McCarthy of California, the House minority leader. “He did that.”

But it was not only Mr. Trump’s response on the Proud Boys that had so many Republicans in a downcast mood on Wednesday.

A handful of Republicans, including some of the president’s most reliable supporters, expressed unease with his dismissal of Mr. Biden’s late son, Beau, and the ridicule of his surviving son, Hunter. “Beau Biden is a hero and it should be acknowledged as such,” said Senator Kevin Cramer of North Dakota.

In a sign of just how disruptive and disrespectful Mr. Trump had been on Tuesday, the Commission on Presidential Debates, which is tasked with organizing the two remaining Trump-Biden encounters, said it would be making changes to the structure of future debates “to ensure a more orderly discussion.”

Mr. Trump’s campaign responded by accusing the commission of “moving the goal posts” to aid Mr. Biden, declaring in a statement that Mr. Trump had been “the dominant force” in the debate.

The president’s flailing onslaught amounted to an unpleasant but useful gift for Mr. Biden, who entered the debate as the clear polling leader in the presidential race and emerged not quite unscathed, but without any obvious damage to his status as the front-runner.

Mr. Biden, who was traveling through Ohio and Pennsylvania on Wednesday, mostly pivoted away from the messy forum, returning to an increasingly familiar message that cast the election as “a choice between Scranton and Park Avenue values.”

Mr. Trump himself was not displeased with his own performance, according to his advisers. On the contrary, he was elated about the debate and saw it as a successful outing for him, according to three people close to the campaign. Some of Mr. Trump’s advisers, who shy away from giving him bad news, made no attempt to disabuse the president of that assessment.

At a late-night rally on Wednesday in Duluth, Minn., Mr. Trump delivered an hourlong recap of his angry debate performance, delivering his stream-of-consciousness attacks to the cheering crowd without a moderator or a rival to get in the way.

He accused Mr. Biden of being a puppet of socialists and communists, lashed out at the news media, complained about the debate’s moderator, called on Mr. Biden to denounce the left-wing movement antifa, and again embraced unproven allegations about the former vice president’s son, Hunter Biden.

Before the debate, advisers had tried to prepare Mr. Trump for a question about white supremacy, pointing out to him that Mr. Biden had made fighting racist violence of the kind that broke out in Charlottesville a central theme of his candidacy. Those efforts at preparation did not pay off, and some Trump advisers were privately candid that his hectoring performance recalled how he handled briefings with reporters about the coronavirus last spring, to his political detriment.

With just over a month left in the campaign, Republicans feared Mr. Trump’s conduct would inevitably make the election a referendum on him and inflict carnage on other G.O.P. candidates with voting groups already deeply distrustful of the party: women, moderates, suburban voters and people of color.

With their Senate majority hanging in the balance, and House Republicans at risk of sinking deeper into the minority, party leaders urged Mr. Trump to do more in the next debates to trumpet their accomplishments on taxes, judges and foreign policy in a way that could make the party palatable for voters in the political center.

“If the ‘suburban housewife’ he keeps talking about really is the whole deal, it’s hard to think he didn’t go backwards with her,” said former Gov. Bill Haslam of Tennessee.

Republicans conceded that it would not be easy to rein in Mr. Trump, whose approach to politics is largely driven by his personal instincts and grievances — and a profound aversion to criticizing anyone whom he counts among his admirers, whether that is President Vladimir V. Putin of Russia, the former Senate candidate Roy S. Moore of Alabama or followers of the online QAnon conspiracy theory.

Other Republicans were despairing not just for their party and its prospects in November but for the country after a debate that they felt represented a low point in American political history.

“I was embarrassed, that’s why I shut off,” said Marc Racicot, the former Montana governor and chairman of the Republican National Committee under former President George W. Bush. “I thought it was a degradation.”

Alluding to Mr. Trump’s remarks about the Proud Boys, Mr. Racicot said the president offered comfort to racists that betrayed the moral leadership responsibilities of his office.

He said he knew he could not support Mr. Trump but had recently decided to vote for Mr. Biden.

“It gnawed at my conscience,” Mr. Racicot said, adding of the president: “I’ve concluded that he’s dangerous to the existence of the republic as we know it.”

G.O.P. Alarmed by Trump’s Failure to Disavow the Proud Boys - The New York Times
Posted by John H Armwood II at 7:44 AM