A rap sheet for a former president - The Washington Post 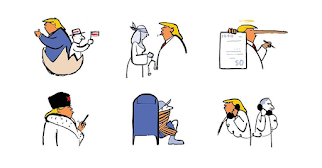 "The next attorney general of the United States faces two daunting decisions: whether to investigate possible criminal conduct by a former president and members of his administration, and if so, whether to file charges.

The Justice Manual directs federal prosecutors to bring charges if they believe that an offense has been committed, if the admissible evidence is enough “to obtain and sustain a conviction,” and if prosecution will serve a substantial federal interest.

Donald Trump and his aides best serves justice, but public reporting suggests there is evidence that could support such charges. State prosecutors also may have evidence of illegal conduct. The statute of limitations for most federal offenses is five years. That means crimes that occurred as far back as 2016 could be charged until their anniversary date in 2021. Older offenses may also be charged if the conduct was part of an ongoing conspiracy — for instance, if a coverup continued within the five-year period covered by the statute. Trump has engaged in other deplorable conduct that probably does not amount to criminal activity. Hiding accurate information about the coronavirus epidemic, for example, may have contributed to the deaths of Americans, but the causal connection is probably too tenuous to charge him with crimes such as negligent homicide or manslaughter. Some say Trump’s conduct toward Russia is treason — including his silence following reporting about Russian bounties on U.S. soldiers in Afghanistan — but this is a nonstarter. Conduct cannot amount to treason unless a person provides aid and comfort to an enemy with whom our nation is engaged in armed conflict.

Here are categories of possible crimes that prosecutors could consider — what the rap sheet of an ex-president might look like.

The gist of this crime is impeding an investigation for a corrupt purpose. Special counsel Robert Mueller’s investigation of possible links between the Trump campaign and Russian interference in the 2016 election developed evidence of 10 instances when Trump was

involved in obstruction. In at least four of those instances, Mueller laid out evidence sufficient to prove each element of the offense: Trump’s efforts to limit Mueller’s investigation to future elections; to dissuade his former campaign chairman, Paul Manafort, from cooperating with prosecutors; to fire Mueller; and to cover up the attempt to fire Mueller. It is not necessary to show that any underlying crime was committed to establish obstruction of justice. Intentional interference in an investigator’s work is crime enough.

Although some critics dismiss obstruction of justice as “mere process crimes,” prosecutors consider this a serious offense because it goes to the heart of the criminal justice system’s truth-finding mission.

False statements and perjury also fall within the obstruction family. During Mueller’s investigation, Trump refused to submit to an in-person interview but agreed to answer written questions. A less-redacted version of Mueller’s report released this summer revealed that the special counsel examined whether Trump lied in his written answers when he denied he had advance knowledge of the release of stolen emails by WikiLeaks, which is inconsistent with other evidence.

Family members and associates of Trump are suspected of committing perjury, or lying under oath, at congressional hearings. Lawmakers have pointed to discrepancies between the testimony of certain witnesses and the testimony of Donald Trump Jr., Jared Kushner, Stephen Bannon and Erik Prince.

Asking for a thing of value in exchange for the performance of an official act violates the federal bribery statute. When Trump threatened to withhold military aid from Ukraine in 2019, he was arguably doing just that. The evidence at his impeachment trial included

Trump’s phone call with Ukrainian President Volodymyr Zelensky asking for a “favor” in the form of finding dirt on a political opponent, Joe Biden. A witness at the impeachment inquiry testified that announcing an investigation that could implicate Biden was a quid pro quo for receiving the military aid. Although the Senate acquitted Trump in his impeachment trial, the Fifth Amendment’s double jeopardy clause should not bar criminal charges, because Trump did not face a loss of liberty over impeachment but rather loss of the presidency.

Trump also uses his properties to generate revenue from parties doing business with the government, which could justify a bribery investigation. Recent reporting indicates that lobbyists and foreign government officials pay to get into the Trump International Hotel in Washington and the Mar-a-Lago resort in Florida to obtain access to Trump. If the president rewarded those spending money at his hotels and resorts with favorable official decisions in office, he could be criminally liable.

This occurs when individuals agree to obstruct the work of a federal agency. If members

of the Trump administration sabotaged the U.S. Postal Service to influence the outcome of the 2020 election, this charge could be considered for anyone who conspired to achieve the illegal objective, even those who took no personal action. This way, the law can reach people who give illegal orders as well as those who carry them out.

In August 2018, Trump’s former attorney Michael Cohen pleaded guilty to making illegal contributions to Trump’s presidential campaign to buy the silence of adult-film star Stormy Daniels, who claimed she had had an affair with Trump. According to the government’s sentencing memo, Cohen set up a shell corporation to make a $130,000 payment to prevent Daniels from making public statements that would harm Trump’s candidacy. As stated in court documents in Cohen’s case, the payments assisted the campaign by preventing the publication of negative stories about candidate Trump that

might influence the election. His payment exceeded the legal limit of $2,700 for campaign contributions and violated the law prohibiting corporate contributions. The government stated that Cohen “acted in coordination with and at the direction of Individual-1” — identified as someone who ran “an ultimately successful campaign for President of the United States.” It appears that the Justice Department has already reached the conclusion that there is sufficient evidence to charge Trump.

Manhattan District Attorney Cyrus Vance Jr. has stated in public documents that the subpoenas he served to obtain Trump’s tax and financial records are part of an investigation into possible crimes committed before Trump became president. Cohen testified before Congress that Trump would alter statements of his wealth and assets to suit his purposes. When seeking a loan to buy the Buffalo Bills, for example, Trump overstated his

net worth to boost the appearance of his creditworthiness, Cohen said. On his tax returns, according to Cohen, Trump would understate the value of his assets to lower his tax bill. Potential crimes include bank, insurance and tax fraud; money laundering; and preparing false business records.

Similar allegations led a court to order Trump’s son Eric to appear for a deposition in a civil investigation brought by the New York attorney general. The deposition occurred Oct. 5. Among the topics reportedly probed was a $21 million deduction taken by the elder Trump on a property known as Seven Springs, outside New York City. The deduction was claimed because Trump donated an easement on the forest surrounding the retreat to a public land trust for conservation purposes. Some have questioned the appraisal of the property as sketchy. While those proceedings are civil in nature, they may further illuminate any criminal conduct in the business practices of Trump and the Trump Organization.

The Hatch Act prohibits federal employees from engaging in certain political activities. The idea is to keep governance separate from campaigning and to protect workers from

being intimidated into supporting a particular candidate as a condition of their employment. While the president is not bound by the Hatch Act, it is a crime for him to command or coerce others to violate the law. Criminal violations of the Hatch Act are punishable by up to three years in prison.

When Trump schedules campaign events at the White House, as he has recently, he is commanding federal employees to violate the Hatch Act by setting up the room, admitting the guests or otherwise performing tasks to support the event. When the president spoke from the White House at the Republican National Convention and recognized uniformed Border Patrol agents who were in attendance, he arguably was soliciting or conspiring with them to violate the Hatch Act.

In his report, Mueller avoided accusing Trump of a crime because Justice Department policy prohibited him from filing charges against a sitting president. Mueller reasoned that making the accusation when no trial could occur would deprive Trump of the opportunity to defend himself in court. He made clear, however, that his report was intended to “preserve the evidence” obtained in his investigation because “a President does not have immunity after he leaves office.”

Biden has said he would leave the business of the Justice Department to his attorney general. So it would fall to a future attorney general to decide whether to accept Mueller’s invitation to investigate and charge the 45th president with crimes. Charging a former president is fraught. We do not want to become a country where presidents are routinely charged after they leave office with crimes stemming from policy decisions, but we also do not want to be a country where a president can commit crimes with impunity, knowing he will not be held accountable."

A rap sheet for a former president - The Washington Post
Posted by John H Armwood II at 7:51 AM