‘It Has to Stop’: Georgia Election Official Lashes Trump

‘It Has to Stop’: Georgia Election Official Lashes Trump
Posted by John H Armwood II at 8:57 AM No comments:

Opinion | Why Are Children Dying of the Flu in U.S. Detention?

Opinion | Why Are Children Dying of the Flu in U.S. Detention?
Posted by John H Armwood II at 8:54 AM No comments:

Rudolph W. Giuliani, who is promoting baseless claims of widespread election fraud, talked about a pardon with President Trump as recently as last week.

President Trump has discussed with advisers whether to grant pre-emptive pardons to his children, to his son-in-law and to his personal lawyer Rudolph W. Giuliani, and talked with Mr. Giuliani about pardoning him as recently as last week, according to two people briefed on the matter.

Mr. Trump has told others that he is concerned that a Biden Justice Department might seek retribution against the president by targeting the oldest three of his five children — Donald Trump Jr., Eric Trump and Ivanka Trump — as well as Ms. Trump’s husband, Jared Kushner, a White House senior adviser.

Donald Trump Jr. had been under investigation by Robert S. Mueller III, the special counsel, for contacts that the younger Mr. Trump had had with Russians offering damaging information on Hillary Clinton during the 2016 campaign, but he was never charged. Mr. Kushner provided false information to federal authorities about his contacts with foreigners for his security clearance, but was given one anyway by the president.

The nature of Mr. Trump’s concern about any potential criminal exposure of Eric Trump or Ivanka Trump is unclear, although an investigation by the Manhattan district attorney into the Trump Organization has expanded to include tax write-offs on millions of dollars in consulting fees by the company, some of which appear to have gone to Ms. Trump.

Presidential pardons, however, do not provide protection against state or local crimes.

Mr. Giuliani’s potential criminal exposure is also unclear, although he was under investigation as recently as this summer by federal prosecutors in Manhattan for his business dealings in Ukraine and his role in ousting the American ambassador there. The plot was at the heart of the impeachment of Mr. Trump.

The speculation about pardon activity at the White House is churning furiously, underscoring how much the Trump administration has been dominated by investigations and criminal prosecutions of people in the president’s orbit. Mr. Trump himself was singled out by federal prosecutors as “Individual 1” in a court filing in the case that sent Michael D. Cohen, his former lawyer and fixer, to prison.

The discussions between Mr. Trump and Mr. Giuliani occurred as the former New York mayor has become one of the loudest voices pushing baseless claims of widespread fraud in the 2020 election, which Mr. Trump still proclaims publicly that he won. Many of Mr. Trump’s longtime aides have refused to do the president’s bidding to try to overturn an election that President-elect Joseph R. Biden Jr. won by nearly seven million votes. But Mr. Giuliani has repeatedly thrust himself into the spotlight to cast doubt on the results, which has ingratiated him with the president.

A spokeswoman for Mr. Trump did not respond to an email seeking comment.

Mr. Giuliani did not respond to a message seeking comment, but after a version of this article was published online, he attacked it on Twitter and said it was false.

Christianné L. Allen, Mr. Giuliani’s spokeswoman, said Mr. Giuliani “cannot comment on any discussions that he has with his client.”

And Mr. Giuliani’s lawyer, Robert Costello, said, “He’s not concerned about this investigation because he didn’t do anything wrong, and that’s been our position from Day 1.”

The Fox News host and Trump ally Sean Hannity said on Monday that given the animosity from Democrats directed at Mr. Trump, the president should consider pardoning his entire family. “If Biden ever became president, I’d tell Trump pardon yourself and pardon your family,” Mr. Hannity told his viewers.

Such a broad pardon pre-empting any charge or conviction is highly unusual but does have precedent. In the most famous example, President Gerald R. Ford pardoned Richard M. Nixon for all of his actions as president. President George Washington pardoned plotters of the Whiskey Rebellion, shielding them from treason prosecutions. And President Jimmy Carter pardoned thousands of American men who illegally avoided the draft for the Vietnam War.

Mr. Trump has wielded his clemency powers liberally in cases that resonate with him personally or for people who have a direct line to him through friends or family, while thousands of other cases await his review.

A pardon for Mr. Giuliani is certain to prompt accusations that Mr. Trump has used his pardon power to obstruct investigations and insulate himself and his allies. Andrew A. Weissmann, a top prosecutor for Mr. Mueller, has said that Mr. Trump’s dangling of pardons for his allies impeded their work.

In July, the president commuted the sentence of his longtime adviser Roger J. Stone Jr., who had refused to cooperate with the special counsel’s investigators and was eventually convicted of seven felonies. Last week, Mr. Trump pardoned his former national security adviser Michael T. Flynn, who had backed out of his cooperation agreement with the special counsel’s office for “any and all possible offenses” beyond the charge he had faced of lying to federal investigators.

The Flynn pardon raised expectations that Mr. Trump would bestow clemency on other associates — like his former campaign chairman Paul Manafort, who refused to discuss matters from the 2016 election with prosecutors — in his final weeks in office.

Mr. Giuliani has asked Mr. Trump’s campaign to pay him $20,000 a day for his work on trying to overturn the election, a figure that would make him among the most highly paid lawyers in the world. The staggering sum has stirred opposition among Mr. Trump’s aides who worry that Mr. Giuliani has perpetuated the claims of election fraud in hopes of making as much money as possible.

Mr. Giuliani has expressed concern that any federal investigations of his conduct that appear to have been dormant under the Trump administration could be revived in a Biden administration, according to people who have spoken to him.

Legal experts say that if Mr. Trump wants to fully protect Mr. Giuliani from prosecution after he leaves office, the president would most likely have to detail what crimes he believed Mr. Giuliani had committed in the language of the pardon.

Federal prosecutors in Manhattan have since 2019 been investigating the role of Mr. Giuliani and two other associates in a wide-ranging pressure campaign directed at pushing the Ukrainian government to investigate Mr. Trump’s rivals, namely Mr. Biden’s son Hunter Biden.

The two Giuliani associates — Lev Parnas and Igor Fruman — were arrested in October 2019 as they prepared to board a flight from Washington to Frankfurt with one-way tickets. They were charged with violating campaign finance laws as part of a complex scheme to undermine the former American ambassador in Ukraine, Marie L. Yovanovitch, who Mr. Giuliani and Mr. Trump believed should have been doing more to pressure the Ukrainians.

Prosecutors in Manhattan continued to investigate Mr. Giuliani’s role in the scheme over the past year, focusing on whether he was, in pushing to oust Ms. Yovanovitch, essentially double dipping: working not only for Mr. Trump but also for Ukrainian officials who wanted the ambassador gone for their own reasons, according to people briefed on the matter.

It is a federal crime to try to influence the United States government at the request or direction of a foreign official without disclosing their involvement. Mr. Giuliani has said that he did nothing wrong and that he did not register as a foreign agent because he was acting on behalf of Mr. Trump, not any Ukrainians.

Even as Mr. Trump maintains that the election was stolen and files lawsuits aimed at delaying its certification, his White House is preparing for the final stages of his presidency. The end of any administration typically prompts a wave of pardons, particularly when a term has been engulfed in controversy like Mr. Trump’s, in which several people close to him became ensnared in federal investigations.

“The pardon power has been used by many presidents in politically self-serving ways, whether it was George H.W. Bush or Clinton,” said Jack L. Goldsmith, a professor at Harvard Law School, citing how Mr. Bush pardoned six of his associates — including the former Defense Secretary Caspar W. Weinberger — for their role in the Iran-contra affair.

“Politically, a pardon of Giuliani would be explosive,” Mr. Goldsmith added, “but pardoning pals has been done before.”

Under previous administrations, presidents have largely granted pardons after they have gone through a formal review process at the Justice Department, where lawyers examined the convictions, discussed the ramifications of the potential pardon with prosecutors and then provided the White House with recommendations on how to proceed. On several occasions, Mr. Trump has gone against the Justice Department’s recommendations and the advice of his own White House advisers, granting pardons to political allies and celebrities.

When presidents have deviated from that process, scandals have occasionally occurred, especially on pardons in the final days of the administration. On the final day of Bill Clinton’s presidency, he granted a pardon to Marc Rich, a wealthy financier and longtime Democratic donor who was considered a fugitive as he had fled the United States to avoid tax charges.

Prosecutors in Manhattan investigated whether the pardon had been part of a quid pro quo, but no one was ever charged. At the time, Mr. Giuliani, who had helped bring criminal charges against Mr. Rich years earlier as a federal prosecutor, was deeply critical of the move, calling it “a disgrace” and declaring it “a midnight pardon.”

No president has tried to grant someone a pardon for crimes they have not yet committed — essentially a prospective get-out-of-jail-free card — and legal experts say it is unlikely to hold any weight. In the case of Donald Trump Jr., Mr. Mueller’s investigation examined questions of whether his contacts during the 2016 election with WikiLeaks and Russians offering dirt on Mrs. Clinton amounted to campaign finance violations. Donald Trump Jr. was never interviewed by the special counsel’s office and was never charged.

In the case of Mr. Kushner, he omitted several significant contacts with foreigners when he filled out a form for his White House security clearance, including ones with the Russians offering damaging information on Mrs. Clinton during the campaign. Under federal law it is a crime to provide inaccurate or incomplete information on the background check documents for security clearances.

In 2018, the White House counsel and chief of staff recommended that Mr. Kushner not receive a Top Secret security clearance because of issues that had been discovered during his background check. Over the objections of Mr. Trump’s aides, the president unilaterally granted Mr. Kushner the clearance.

Trump Has Discussed With Advisers Pardons for His 3 Eldest Children and Giuliani - The New York Times
Posted by John H Armwood II at 8:17 PM No comments:

Redacted, Court filing by Judge exposing lobbying the White House for a Presidential Pardon and a bribery scheme. No individuals were revealed because of the redaction. This is a ticking bomb. 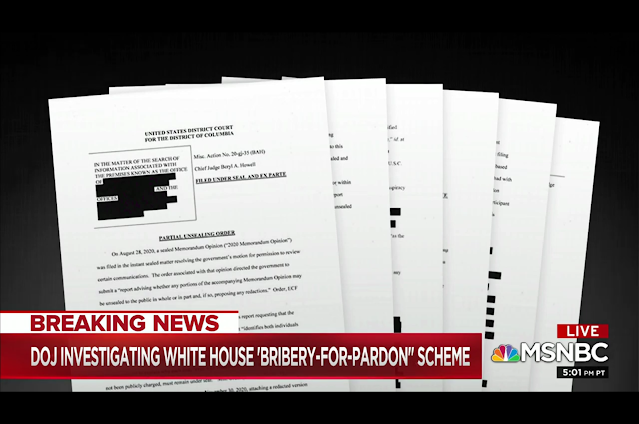 Posted by John H Armwood II at 8:10 PM No comments: