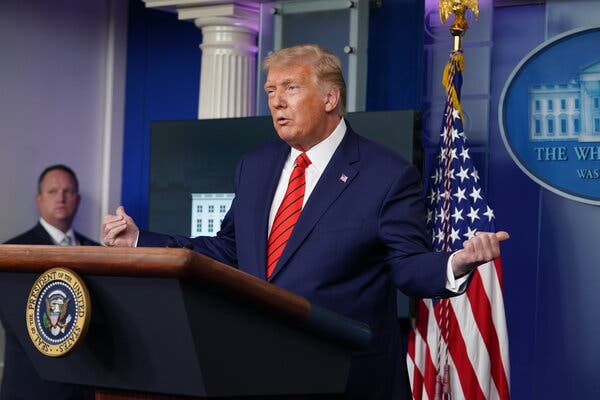 "WASHINGTON — President Trump has been throwing accelerant on the fire of the nation’s social unrest rather than trying to put it out, seeking confrontation rather than calm at a volatile moment his advisers hope will help salvage his campaign for a second term.

Other presidents in times of tumult tried to settle down communities convulsed by racial and cultural divisions, but Mr. Trump has encouraged one side against another. He has threatened to deploy federal forces, condoned freelance actions by his own armed supporters, conflated peaceful protesters with violent rioters and used the strife to undercut his political opponents.

He plans to fly Tuesday to Kenosha, Wis., uninvited and unwelcome by local authorities in a state pivotal to the November election, to condemn what he calls “left-wing mobs” that are “marauding through our cities.” In his goal to cement his desired image as a “law-and-order president,” he will meet with the police and tour businesses damaged by rioting.

As of Monday evening, however, Mr. Trump had no plans to meet with the family of Jacob Blake, an unarmed Black man shot in the back seven times in front of his children, prompting the latest uproar. For that matter, the president has yet to even speak Mr. Blake’s name in public, much less comment on his case other than to say, when questioned, that the shooting captured on video “was not a good sight.”

But Mr. Trump has had plenty to say about the eruption of street violence that followed as he blames it on Democrats, including former Vice President Joseph R. Biden Jr., and injects it directly into the presidential campaign. He has tried to make protests and riots his central issue, distracting from the coronavirus pandemic that continues to kill roughly 1,000 Americans every day.

“The violence is fueled by dangerous rhetoric from far-left politicians that demonize our nation and demonize our police,” Mr. Trump said Monday at a news conference. “The violent rioters share Biden’s same talking points, and they share his same agenda for our nation,” he added. “The rioters and Joe Biden have a side — they’re both on the side of the radical left.”

Mr. Trump has hardly discouraged his own supporters, who have been traveling to protests itching for a fight. On Twitter over the weekend, the president justified the actions of his backers who fired at protesters with paintballs and pepper spray in Portland, Ore., calling it the natural response to the mayor’s failure to crack down.

At Monday’s news conference, he went further and defended them. “That was a peaceful protest,” he said. “Paint is a defensive mechanism. Paint is not bullets.” He noted correctly that a supporter of his, Aaron J. Danielson, was shot to death during a clash with protesters in Portland, and he condemned that as “disgraceful.”

But he defended another of his supporters, Kyle H. Rittenhouse, 17, who showed up at a protest in Kenosha armed with a military-style rifle and has been charged with homicide after two demonstrators were shot and killed, suggesting the teenager acted in self-defense. “I guess he was in very big trouble,” Mr. Trump said. “He probably would have been killed.”

The strategy is consistent with the president’s lifetime of provocation. From his time as a celebrity real estate developer, Mr. Trump has never been a conciliator, and he has long gravitated toward conflict and sought to escalate it. As president, he often plays to and amplifies racial divisions in the country.

He blurred the distinction between white supremacists and their opponents in Charlottesville, Va., in 2017, and a year later, he issued dire warnings about caravans of immigrants invading the United States just before the 2018 midterm election.

Mr. Trump and his advisers have grown especially energized in recent days as they have pressed the law-and-order issue and claimed credit when Mr. Biden and the Democrats have addressed the matter more vocally. A smattering of public polls have shown the race tightening since the Republican National Convention last week, when Mr. Trump presented a highly dramatic and exaggerated portrait of a country in chaos because of “mob rule.” Still, Mr. Biden retains a six-point lead in two national surveys.

Trump campaign officials insisted their internal polling shows a tighter race than the public data does, including in Minnesota, a swing state where the president’s aides have long maintained that the unrest after the killing of George Floyd, an unarmed Black man, while in police custody, would accrue to their benefit. The campaign has added questions about the disorder to the surveys they have been conducting and hopes to counter inroads that Mr. Biden has made with white voters in recent months.

Democrats have grown increasingly nervous in recent days, fearing that Mr. Trump was successfully gaining traction with the issue, motivating his own base to turn out and appealing to independents turned off by television images of burning cars and looting.

“There’s a lot of hand-wringing going on with Democrats,” acknowledged Terry McAuliffe, the former governor of Virginia and Democratic National Committee chairman. “We love to do that.”

But he argued that the issue ultimately would play to Mr. Biden’s benefit because, he maintained, Mr. Trump was the one who has fomented the strife. “Let us play on that field. I think it’s a great field for us to play on,” Mr. McAuliffe said. “Everyone knows we need healing, and that’s a strong suit for Biden. It’s a mistake for Trump, but he doesn’t have much to run on.”

Mr. Trump clearly does not want to run on the response to the coronavirus — which has been roundly criticized as the American caseload tops six million with 183,000 dead — and his focus on the street violence has managed to change the subject for a few days. He opened his news conference with an update on the pandemic but quickly shifted to the dangers of “the radical left.”

Earlier in the day, the Trump campaign held a conference call for reporters with law enforcement officials who argued that it was Mr. Biden’s responsibility to tamp down the rioting even though he is not in office and Mr. Trump is.

“Over the last three months, Joe Biden has shown us the kind of leader he would be,” said Michael Slupe, a sheriff in Pennsylvania, who criticized Mr. Biden in terms the Trump campaign has set — that he needs to specifically criticize Antifa, the anti-fascist movement, among other things.

Mr. Trump’s advisers have made clear that they see the issue as an electoral boon. “The more chaos and anarchy and vandalism and violence reigns, the better it is for the very clear choice on who’s best on public safety and law and order,” Kellyanne Conway, his departing White House counselor, said last week on “Fox & Friends.”

Mr. Trump’s trip to Kenosha on Tuesday is likely to add more tension to a city on edge since Mr. Blake’s shooting. The president said he tried calling the family of Mr. Blake — he did not use his name — but was told a lawyer would be on the line and therefore opted not to talk with them. “They did have a lawyer that wanted to be on the phone, so I said no, that’s inappropriate,” Mr. Trump said.

The president said he did speak with the family’s pastor. Mr. Blake’s father, Jacob Blake Sr., told CNN that “we don’t have a family pastor.” But Benjamin Crump, a lawyer representing the family, said separately that a pastor for Mr. Blake’s mother referred the White House to the family’s legal team.

“I’m not getting into politics,” the elder Mr. Blake said as his son remained hospitalized and paralyzed. “It’s all about my son, man. It has nothing to do with a photo-op. It has to do with Jacob’s operation.”

Gov. Tony Evers and Mayor John Antaramian, both Democrats, have asked the president not to come. Mr. Antaramian said he found out about the president’s planned visit through a text from a friend.

“From my perspective, right now is not the time,” Mr. Antaramian said. “When you look at the issues that are going on in the community, this community is trying to heal, we’re trying to pull together. I think that at this point in time, it’s not the best idea.”

The city already had 1,000 National Guard troops in town, so it was well equipped to deal with any unrest that might stem from the president’s visit, the mayor said.

Local activists were making plans to protest Mr. Trump’s trip to the city. A group of activists planned to hold a community gathering on Tuesday in the neighborhood where Mr. Blake was shot. The hope, they said, was to keep the attention on the issue of police violence and not to let Mr. Trump distract from that.

But there were others still stinging from the violence who were glad that Mr. Trump was coming. “We need his help, his support,” said Holly Tuttle-Barthuly, 56, a lifelong Kenosha resident and day care owner who wore a T-shirt that read, “#KenoshaStrong” and “#KenoshaCares.” She added, “He’s actually showing interest in a little city in Wisconsin.”

Trump Fans Strife as Unrest Roils the U.S. - The New York Times
Posted by John H Armwood II at 7:35 AM