Opinion | Down With Judicial Supremacy! - The New York Times 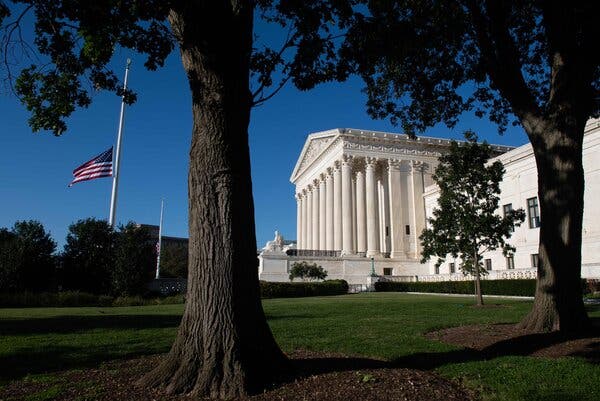 "Beyond the obvious — that liberals need some way to respond to President Trump as he moves to fill the Supreme Court vacancy left by the death of Ruth Bader Ginsburg — what does it mean that mainstream Democrats are considering once unthinkable ideas like adding seats to the court?

I take a different perspective. If Democrats are willing to treat a Republican-dominated Supreme Court as a partisan and ideological foe, if they’re willing to change or transform it rather than accede to its view of the Constitution — two very big ifs — then they’re one important step along the path to challenging judicial supremacy, the idea that the courts, and the courts alone, determine constitutional meaning.

The Supreme Court has the power to interpret the Constitution and establish its meaning for federal, state and local government alike. But this power wasn’t enumerated in the Constitution and isn’t inherent in the court as an institution. Instead, the court’s power to interpret and bind others to that interpretation was constructed over time by political and legal actors throughout the system, from presidents and lawmakers to the judges and justices themselves.

If judicial supremacy was constructed, then it was also contested, and that contestation is a recurring part of American political life. “The judiciary is not the sole guardian of our constitutional inheritance and interpretive authority under the Constitution has varied over time,” the legal scholar Keith E. Whittington writes in “Political Foundations of Judicial Supremacy: The Presidency, the Supreme Court and Constitutional Leadership in U.S. History.”

Fights over the power and authority of the judiciary have been especially fierce at those points in American history when an ambitious president atop a rising coalition has tried to remake the political order according to that coalition’s understanding of the Constitution. These presidents, Whittington argues, “achieve ‘greatness’ through their ability to tear down the inherited but discredited regime and raise up a new one in their own image. They ‘reconstruct’ the nation by reinterpreting its fundamental commitments.”

The first dates to the very beginning of the 19th century. In a desperate bid to secure its ideological goals and establish a beachhead against Thomas Jefferson’s Democratic-Republicans, the Federalist Party under President John Adams fought to consolidate federal judicial authority over state law. Adams lost the election of 1800 to Jefferson, but the lame-duck Federalist-controlled Congress passed a new judiciary act meant to bind the incoming administration. The act, the historian Gordon S. Wood explains in “Empire of Liberty: A History of the Early Republic, 1789-1815,”

eliminated circuit court duty for the justices of the Supreme Court by creating six new circuit courts with sixteen new judges. It broadened the original jurisdiction of the circuit courts, especially in cases involving land titles, and provided for the easier removal of litigation from state to federal courts.

The act also removed a justice from the Supreme Court, shrinking it from six members to five. Then Adams, still as the outgoing president, appointed a host of new Federalist judges, including his last secretary of state, John Marshall, as chief justice.

Facing this as president-elect, Jefferson complained that the Federalists had “retired into the judiciary as a stronghold” from which “all the works of republicanism are to be beaten down and erased.”

“By a fraudulent use of the Constitution which has made judges irremovable,” he added, “they have multiplied useless judges merely to strengthen their phalanx.”

Rather than let the Federalist Party’s rear-guard action stand, Jefferson and his allies reversed it following a bitter debate in Congress. They destroyed the newly created circuit courts, revoked tenure from the relevant federal judges and restored the sixth seat to the Supreme Court. Crucially, Jefferson refused to recognize judicial commissions delivered after Adams left office. This led to Marshall’s famous decision in Marbury v. Madison, where he reserved for the “judicial department” the right “to say what the law is,” which Jefferson later condemned as that which “would make the judiciary a despotic branch.”

Fifty years later, at midcentury, the Republican Party of Abraham Lincoln and William Seward fought a similar battle against a Supreme Court beholden to the “slave power” that was dominated by Democratic appointees, including Chief Justice Roger Taney, who wrote the Court’s infamous majority opinion in the 1857 case Dred Scott v. Sanford.

In Dred Scott, the Court ruled that Black Americans “had no rights which the white man was bound to respect.” It held that Congress could not ban slavery in federal territories, and it struck down the 1820 Missouri Compromise as an unconstitutional limitation on the rights of slaveholders. Backed by much of the Democratic Party, including President James Buchanan, the court effectively outlawed the Republican Party’s antislavery platform.

The response, as the historian Matt Karp details in a recent essay for Jacobin magazine, was “political war on the idea of an all-powerful judiciary.” From 1857 through the 1860 election, Republicans attacked the court for, in their view, overstepping its constitutional bounds. They condemned justices as mere political appointees and challenged the court’s claim to judicial supremacy, distinguishing its right to decide individual cases from any greater authority to decide the meaning of the Constitution. Lincoln himself made this point to the country at large in his first inaugural address:

The candid citizen must confess that if the policy of the Government upon vital questions affecting the whole people is to be irrevocably fixed by decisions of the Supreme Court, the instant they are made in ordinary litigation between parties in personal actions the people will have ceased to be their own rulers, having to that extent practically resigned their Government into the hands of that eminent tribunal.

Speaking to the assertion by Southern slaveholders that their interests ought to dictate the fate of an entire nation, Lincoln also said that

a majority held in restraint by constitutional checks and limitations, and always changing easily with deliberate changes of popular opinions and sentiments, is the only true sovereign of a free people.

“Whoever rejects it,” he continued, “does of necessity fly to anarchy or to despotism.”

President Trump will make a nomination to the Supreme Court and Senate Republicans are very likely to confirm her, whoever she turns out to be. Irrespective of norms or promises, the rules of American politics say that Republicans can take this step, even if it throws the legitimacy of Republican rule — which rests on control of an interlocking set of counter-majoritarian institutions — into sharp relief. But that standard also frees Democrats to act, should they have the opportunity.

Democrats are not yet united on court reform — far from it. But the skeptical should know that if they do not act, they will not govern. At no point in the last 20 years have the majority of Americans voted to give conservative jurists unchecked power to interpret the Constitution. But those jurists have it, and that gives them the power to unravel the federal government as Americans have known it since Franklin Roosevelt took aim at the Depression.

If Democrats win in 2020 and want to deliver on their promises, they will have to do something about the courts. There is no choice other than impotence in the face of a conservative judicial redoubt. The United States may not be a “pure democracy,” but it’s not a judgeocracy either, and if protecting the right of the people to govern for themselves means curbing judicial power and the Supreme Court’s claim to judicial supremacy, then Democrats should act without hesitation. If anything, they’ll be in good historical company."

Opinion | Down With Judicial Supremacy! - The New York Times
Posted by John H Armwood II at 7:44 AM