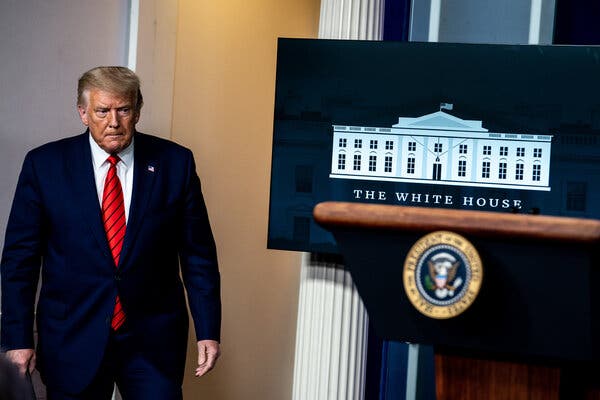 "The president must condemn those responsible for violence and disavow those who act in his name. Easy, right?

I want to make a prediction about the election in November.

Here it is: If Joe Biden wins, it will be, in part, because Donald Trump could not separate himself from the chaos and disorder that have consumed his presidency.

But all is not lost for him or his campaign. What he needs to do right now is condemn those responsible for violence and disavow those who act in his name. He needs, in other words, what political observers have come to call a “Sister Souljah moment,” a pointed repudiation of a radical element within one’s own coalition, named for Bill Clinton’s rebuke of the eponymous hip-hop artist while speaking to Jesse Jackson’s Rainbow Coalition during the 1992 presidential campaign. A display like Clinton’s would show the country that Trump can be trusted to govern on behalf of all Americans.

Trump is in electoral trouble. He just had one of the best weeks of his presidency, four days of praise and celebration meant to put his negative record in the most positive light that the Republican Party and its strategists can muster. But none of it moved the needle much. Trump still trails Joe Biden in national polls, still trails him in swing states and is still struggling to improve his image with the majority of the voting public.

A few days before the Republican convention, the Democratic Party concluded its national convention with a speech by Joe Biden accepting the party’s nomination for president. In it, he hit one of his main themes, that Trump is fanning the fires of division and hatred for political gain. “The current president has cloaked America in darkness for much too long. Too much anger. Too much fear. Too much division.”

As if on cue, the week of the Republican National Convention saw exactly the kinds of mayhem and havoc that Trump has condoned throughout his years in political life.

It began with a police shooting. A white officer shot a Black man in the back while his children watched just a few feet away. The victim, Jacob Blake, survived the encounter, although he is now paralyzed. But the city of Kenosha, Wis., where the shooting took place, exploded in rage.

Any hope of controlling anger on the ground was lost when police met the agitated crowd with tear gas. For two nights, the city saw outright riots with shattered windows, looting and burned buildings. In the absence of police control, armed vigilantes took matters into their own hands, traveling to Kenosha supposedly to protect buildings and other property. One of them, a teenager from nearby Antioch, Ill., killed two men in a confrontation on the third night that left no clear answers. Some say it was murder, others self-defense.

A few days later, a truck caravan of Trump supporters drove through downtown Portland, Ore., spraying mace and shooting paintballs as well as speeding through crosswalks filled with counterprotesters. Before the night was over, an armed opponent of the caravan allegedly shot and killed a participant.

It is the worst of all worlds, for an incumbent president seeking re-election, to have the country feel as if its coming apart under his leadership. Trump can deflect and cast this chaos as a preview of “Biden’s America,” but the public usually punishes those who preside over disorder, from Vice President Hubert Humphrey in 1968 to President George H.W. Bush in 1992. Trump is on the same path, with low approval ratings of his handling of “crime” (46 to 52 percent) and even lower approval of his handling of “race relations” (37 to 62 percent).

Compounding this problem is his rhetoric. The president speaks as if he approves of violence in the streets. Kenosha would be quiet if not for an incident of police brutality and abuse. The same is true for other cities where rioting and disorder have taken place. And yet, just last Friday, the president lamented the extent to which officers can’t use excessive force against protesters: “The reason they didn’t fight back too much,” Trump said of the police confronting protesters at his acceptance speech in Washington, D.C., is “they don’t want to lose their pension” and “they don’t want to lose their job” because “we’ve become too politically correct. Everybody’s afraid to do anything now.”

Trump said something similar several years ago, telling David Muir of ABC News that he would send federal “help” to Chicago to handle its homicide problem. “I will send in what we have to send in. Maybe they’re not gonna have to be so politically correct,” he said.

On Monday, Trump held a news conference. Asked to condemn the killings in Kenosha, he said the shooter acted in self-defense; otherwise, “he probably would have been killed.” Asked to condemn the Portland caravan for harassment, he refused. (Over the weekend, on Twitter, he called them “GREAT PATRIOTS!”) Trump said nothing, in other words, to disprove Biden’s claim that he “looks at this violence and sees a political lifeline” and that he “adds fuel to every fire.”

It’s not too late. With a little more than two months until the election, the president can still reverse course. But he cannot do so as long as he and his campaign indulge the fantasy that he is blameless and untouched by the crisis in “Democrat cities.”

The solution is for Trump to disavow the instigators. His trip to Kenosha today should include tough words for police officers who insist on using lethal force when it’s not necessary. He should urge police departments to reject the use of tear gas, rubber bullets and military-style equipment against protesters, understanding, as the Kerner Commission report explained in 1968, that “the harmful effects of overreaction are incalculable.”

Face to face with law enforcement at the site of a terrible tragedy, Trump will have the chance to rebuke both bad policing and the self-styled militias who raised the heat on an already tense situation.

Trump needs to show swing voters that he cares about the rights of African-Americans and has a plan to handle police brutality and violence. He needs to show his independence from the most radical parts of his base. It’s an opportunity he shouldn’t let go to waste.

Not that I’ll hold my breath."

Opinion | Trump Needs His Own Sister Souljah Moment - The New York Times
Posted by John H Armwood II at 7:38 AM