“To Beat Trump, Mock Him

Can critics of President Trump learn something from pro-democracy movements in other countries? 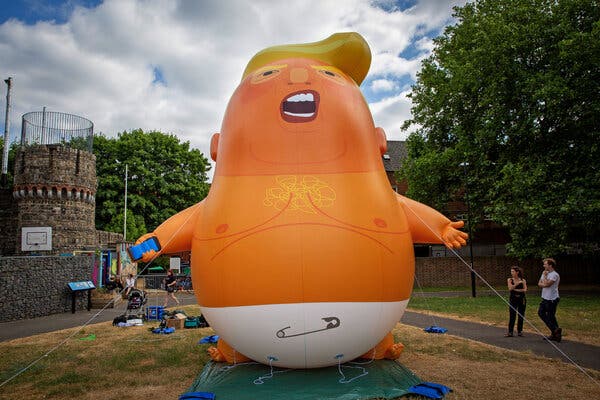 Most Americans don’t have much experience confronting authoritarian rulers, but people around the globe are veterans of such struggles. And the most important lesson arguably is “laughtivism”: the power of mockery.

Denouncing dictators has its place, but sly wit sometimes deflates them more effectively. Shaking one’s fist at a leader doesn’t win people over as much as making that leader a laughingstock.

“Every joke is a tiny revolution,” George Orwell wrote in 1945.

American progressives have learned by now that frontal attacks aren’t always effective against Trump. Impeaching Trump seemed to elevate him in the polls. A majority of Americans agree in a Quinnipiac poll that Trump is a racist, yet he still may win re-election. Journalists count Trump’s deceptions (more than 20,000 since he assumed the presidency) and chronicle accusations of sexual misconduct against him (26 so far), yet he seems coated with Teflon: Nothing sticks.

America has had “Baby Trump” balloons, “Saturday Night Live” skits and streams of Trump memes and jokes. But all in all, Trump opponents tend to score higher on volume than on wit. So, having covered pro-democracy campaigns in many other countries, I suggest that Americans aghast at Trump absorb a lesson from abroad: Authoritarians are pompous creatures with monstrous egos and so tend to be particularly vulnerable to humor. They look mighty but are often balloons in need of a sharp pin.

Even before it collapsed, the moral authority of the Soviet Union had been hollowed out by endless jokes. In one, a secret policeman asks another, “What do you think of the regime?” Nervously, the second policeman replies, “The same as you, comrade.” At that point the first one pulls out handcuffs and says, “In that case, it is my duty to arrest you.”

Are the stakes too serious to laugh? Does cracking jokes devalue a democracy struggle? I don’t think so. One of the most successful examples of laughtivism came two decades ago when university students took on the regime of Slobodan Milosevic in Serbia. Milosevic committed genocide and isn’t an obvious target of humor — but the students’ wit helped topple him.

A typical stunt: They taped a picture of Milosevic on the side of a barrel and invited passers-by to take a swing at it with a baseball bat. The resulting photos of the police “arresting” the barrel and hauling it away were widely publicized and made Milosevic seem less mighty and more ridiculous. In 2000, Milosevic was ousted and handed over to an international tribunal to be tried for war crimes.

Here in the United States, we’ve also seen the power of wit. One of the most effective critics of “Boss Tweed” and Tammany Hall in the 19th century was Thomas Nast, the cartoonist. And Senator Joseph McCarthy’s nemesis, and the man who coined the term “McCarthyism,” was the cartoonist Herblock.

(Don’t tell my editors, but cartoonists, now an endangered species, are often more incisive social and political critics than columnists.)

In South Africa, the cartoonist Jonathan Shapiro skewered President Jacob Zuma so deftly and often that he was arguably one reason Zuma was forced to resign in 2018. Zuma sued Shapiro, whose response was a cartoon in which Zuma rages that he will sue for “damage to my reputation.” Shapiro coolly responds, “Would that be your reputation as a disgraced chauvinist demagogue who can’t control his sexual urges and who thinks a shower prevents AIDS?”

In Malaysia, Prime Minister Najib Razak was toppled the same year in part because of the work of another cartoonist, Zulkiflee Anwar Haque, who persevered despite prosecutions and physical attacks.

That’s one gauge of the power of humor: Dictators fear mockery. The Committee to Protect Journalists says it has intervened this year alone to defend seven cartoonists around the world who were arrested, threatened with prosecution or threatened with death.

In Russia, the dissident Aleksei Navalny uses withering sarcasm in his efforts to bring democracy to Russia. Navalny, now recovering in Germany from what apparently was an attempt by Russian officials to murder him with Novichok nerve gas, responded to Russian suggestions that he had poisoned himself:

“I boiled Novichok in the kitchen, quietly took a sip of it in the plane and fell into a coma,” he wrote on Instagram. “Ending up in an Omsk morgue where the cause of death would be listed as ‘lived long enough’ was the ultimate goal of my cunning plan. But Putin outplayed me.”

Leaders like Trump who pose as religious are particularly easy to skewer, as Iranians have shown in their use of humor to highlight the hypocrisy of their own mullahs. Ayatollah Mesbah Yazdi is still nicknamed “Crocodile” because of a cartoon many years ago by Nik Kowsar, who now lives in exile in America because hard-liners arrested him and threatened to murder him.

No, I won’t be drawing cartoons or trying stand-up. I know my limitations. But I’m frustrated by the lack of traction that earnest critiques of Trump get, and I think it’s useful to learn lessons about how people abroad challenged authoritarians and pointed out their hypocrisy with the simple precision of mockery.

I’m also frustrated that some forceful criticisms of Trump sometimes come across to undecided voters as strident or over the top. People like me are accused of suffering from Trump Derangement Syndrome, and our arguments are dismissed precisely because they are so fervent.

Something similar happens in many countries. Citizens who aren’t political are often wary of pro-democracy leaders who are perceived as radical, as irreligious or as overeducated elitists. But those ordinary citizens appreciate a joke, so humor becomes a way to win them over.

“The grins of the people are the nightmares of the dictators,” wrote Liu Xiaobo, the Chinese dissident who won the Nobel Peace Prize in 2010 while in prison. He is best-known for his eloquent essays calling for democracy, but he argued that humor is also essential in undermining authoritarian rulers.

Liu generously added — and this may be relevant to a polarized country like the United States — that satirizing an authoritarian is good for the nation because it makes the eventual downfall and transition softer and less violent.

“A clown needs less revenge than a monster does,” he observed.”

To Beat Trump, Mock Him
Posted by John H Armwood II at 9:33 AM