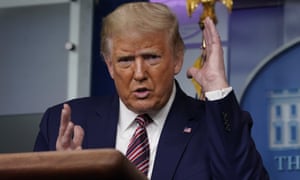 "The New York Times reported on Sunday that it had obtained Donald Trump’s tax information, long the holy grail of US political reporting.


The president “paid $750 in federal income taxes the year he won the presidency”, the paper reported, adding that “in his first year in the White House, he paid another $750.
“He had paid no income taxes at all in 10 of the previous 15 years – largely because he reported losing much more money than he made.”
Saying Trump faced a possible hit of “more than $100m” if he lost “a decade-long audit battle with the Internal Revenue Service over the legitimacy of a $72.9m tax refund that he claimed, and received, after declaring huge losses”. The paper promises more stories in the coming weeks.
“The tax returns that Mr Trump has long fought to keep private tell a story fundamentally different from the one he has sold to the American public,” the paper added.
Trump will face Joe Biden in the US presidential election on 3 November.
The Times also said the documents it had obtained “comprise information that Mr Trump has disclosed to the IRS, not the findings of an independent financial examination. They report that Mr Trump owns hundreds of millions of dollars in valuable assets, but they do not reveal his true wealth. Nor do they reveal any previously unreported connections to Russia.”
Alan Garten, a lawyer for the Trump Organization, told the Times that “most, if not all, of the facts appear to be inaccurate” and said: “Over the past decade, President Trump has paid tens of millions of dollars in personal taxes to the federal government, including paying millions in personal taxes since announcing his candidacy in 2015.”
The newspaper pointed out that “personal taxes” appeared to cover other federal taxes, including social security and Medicare.
Trump held a scheduled press conference at the White House, which he began by boasting about his third supreme court nominee, Amy Coney Barrett, and the progress of his re-election campaign."
New York Times publishes Donald Trump's tax returns in election bombshell | US news | The Guardian
Posted by John H Armwood II at 6:57 PM