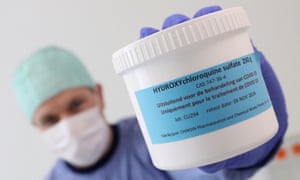 "Historically, medical research has often taken a one-size-fits-all approach, lumping women and men together despite growing evidence that the sexes differ in how they catch and fight disease.


A stark example was the heart drug digoxin, which was widely marketed in the late 1990s on the basis of a trial that showed it to be effective and safe. But over time a higher incidence of side-effects in women emerged. When the same dataset was analysed on the basis of sex, it showed digoxin decreased mortality in men – but increased mortality in women.
“Women are not just small men,” one expert said.
Covid-19 seems to be a case in point when it comes to differences between the sexes, with men thought to be up to twice as likely as women to die from the virus. But a new analysis suggests that scientists involved in the race to develop medical interventions for the coronavirus have paid little attention to these disparities.
In a still to be peer-reviewed study, researchers found that only 416 of the 2,484 Covid-19 clinical trials mention sex/gender as a recruitment criterion on the ClinicalTrials.gov database.
There had been just 11 original reports of randomised-controlled clinical trials published by journals in June, and none of the analyses was disaggregated by sex – although each study did report the number of female and male participants.
Some of those 11 studies evaluated hydroxychloroquine (HCQ), a decades-old malaria drug that initially generated buzz as a potential Covid-19 treatment.
HCQ causes heart rhythm side-effects that can be deadly, and the drug’s side-effects are known to be more prevalent in women, said study author Dr Sabine Oertelt-Prigione, a member of the European commission’s expert group on gendered innovations. If you don’t provide a sex-disaggregated analysis for a drug like this, she said, “what happens with all the potential new therapies?”
Mathias Wullum Nielsen, of the University of Copenhagen and an author of the latest analysis, said: “I think our study … suggests deeply ingrained norms that are difficult to change.”
While there is recognition today that women should be adequately represented in clinical trials, a series of birth defects and other problems resulting from foetal exposure to certain drugs between the 1940s and 1970s prompted scientists to initially exclude women and their foetuses, and later women of childbearing age, from clinical drug research.
Women were also seen as confounding test subjects, with their fluctuating hormonal levels, by researchers who generally believed that women and men would similarly respond to drugs. Eventually, Caucasian males came to be considered the “norm” population. Regulatory standards slowly shifted in favour of re-including women in trials by the 1990s.
But change came slowly, and even though researchers now typically maintain sex balance in trial recruitment, the final step of analysing data by sex does not always occur – with damning outcomes.
A 2001 study conducted by a government agency that holds US Congress to account found that of the 10 drugs that had been withdrawn from the US market since 1997, eight posed greater health risks for women than for men.
“The problem is, if you don’t do sex analysis – if males and females have very different responses – you could miss [accurate data on] everybody,” said Londa Schiebinger, a history of science professor at the University of Stanford.
Many funding agencies now require that scientists conduct sex analyses, as have some medical journals, while drug regulators are encouraging the practice. But until the exercise is enforced it appears the status quo will continue, experts said.
“People will promise anything if it allows them to either record the study or secure funding … but if it’s not being monitored, it doesn’t necessarily happen,” said Oertelt-Prigione.
“Women are not just small men. We have different hormones [levels], smaller kidneys and more fat tissue where drugs can accumulate,” said Dr Cara Tannenbaum, a scientific director at the Canadian Institutes of Health Research. “There’s so many reasons why things can go wrong.”
When it comes to Covid-19, and infectious diseases in general, female immune systems are considered stronger, in part because they have two X chromosomes that are understood to shape immune responses, although environmental factors play key roles. There are other established physiological and anatomical differences that may also make women more susceptible to some drug-related risks.
It’s therefore imperative that scientists analyse data by sex, the experts stressed.
“It’s a new virus we’re dealing with … there’s a lot of open questions,” said Oertelt-Prigione.
“Especially in a situation like this, providing data can help move mountains, and it can help convince people who usually wouldn’t think that this is a priority.”
Not accounting for sex differences in Covid research could be deadly | Science | The Guardian
Posted by John H Armwood II at 2:39 PM