Opinion | Can Mitch McConnell Be Stopped? - The New York Times 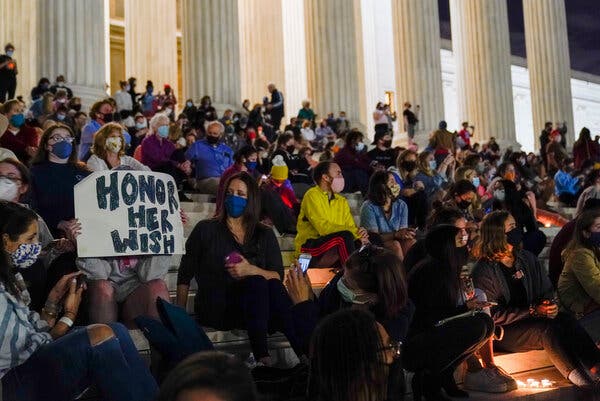 "If Republicans give Ruth Bader Ginsburg’s seat to some Federalist Society fanatic, Democrats should pack the court.

Two years ago at The Atlantic Festival, Senator Lindsey Graham defended the Republican decision to block President Barack Obama’s nominee to the Supreme Court, Merrick Garland. “If an opening comes in the last year of President Trump’s term, and the primary process is started, we’ll wait to the next election,” Graham said.

Now that Justice Ruth Bader Ginsburg has died, only a month and a half before the 2020 election, the chance that the senator keeps his word seems infinitesimal. (He has already said that after Brett Kavanaugh, “the rules have changed.”)

Mitch McConnell certainly has no intention of abiding by the so-called McConnell rule, an invention to justify the Senate’s refusal to consider Garland in March 2016. “The American people should have a voice in the selection of their next Supreme Court justice,” McConnell said then. “Therefore, this vacancy should not be filled until we have a new president.”

But only hours after Ginsburg’s death was announced, McConnell said in a statement, “President Trump’s nominee will receive a vote on the floor of the United States Senate.” His tortuous excuse is that his made-up rule is meant to apply only when the Senate and the presidency are controlled by different parties.

Replacing a progressive icon on the Supreme Court with a hard-core reactionary — one who will overturn Roe v. Wade, decimate civil rights law and fully unshackle big business — is an existential matter for the right. It is both the culmination of decades of conservative activism and perhaps an insurance policy in case the 2020 election itself ends up being decided by the court, like Bush v. Gore.

The question now is whether Trump and McConnell can be stopped, and what Democrats should do if they aren’t.

Shortly before Ginsburg’s death was announced, Senator Lisa Murkowski told Alaska Public Media that she wouldn’t vote to confirm a new Supreme Court justice this close to the election. The Times’s Jonathan Martin tweeted that another Republican senator, Susan Collins, told him earlier this month that she would oppose seating a new justice in October.

Should Collins hold firm — obviously nothing to count on — two more Republican senators would have to defy their leadership to save an already beaten, suffering, riven country from being torn fully in half.

There’s a potential twist, because of the special election in Arizona to fill John McCain’s old seat. Mark Kelly, a Democrat, is running against Martha McSally, who was appointed to that seat after McCain’s death. If Kelly wins, as he is favored to, he could be seated as early as Nov. 30.

Outraged people should take to the streets en masse. Democrats in the Senate may not be able to stop Republicans from shoving a nominee through before the election or during a lame-duck session, but if it happens they should do all in their power to grind Senate business to a halt.

And if Republicans do give Ginsburg’s seat to some Federalist Society fanatic, Democrats must, if they win back the presidency and the Senate, abolish the filibuster and expand the court, adding two seats to account for both Garland and Ginsburg.

This goes against Joe Biden’s instincts toward bipartisanship and national reconciliation. But if Republicans continue to ruthlessly bend the rules to establish the domination of the minority over the majority, only hardball tactics can restore democratic equilibrium. Republicans will shriek, but their brazen hypocrisy should justify such dramatic moves in the eyes of the public. They’ll be the ones who’ve annihilated whatever legitimacy the court has left.

Graham’s words couldn’t be clearer, nor could those of Senator Chuck Grassley, the former chair of the Senate Judiciary Committee, who blocked Garland. Just last month, Grassley said that he “couldn’t move forward” with a Trump nominee this year because of the 2016 standard. If Republicans force a justice on us, it’s because they believe that standards are for suckers, and people who hold power need not be constrained by any pledge or institutional tradition.

According to Ginsburg’s granddaughter, the justice made a dying wish: “My most fervent wish is that I will not be replaced until a new president is installed.”

It doesn’t matter how exhausted we are, or how difficult the odds. In this hell-spawned year, we can either give up, or give everything we can to stop some of America’s worst men from blotting out the legacy of one of our very best women."

Opinion | Can Mitch McConnell Be Stopped? - The New York Times
Posted by John H Armwood II at 10:21 AM