"Immigrants in a US Immigration and Customs Enforcement (Ice) detention center in Georgia are being subjected to horrific conditions and treatment, including “jarring medical neglect” and a high rate of hysterectomies among women, according to a whistleblower complaint filed by several legal advocacy groups on behalf of a nurse who works there.
The nurse, Dawn Wooten, has been practicing for more than 10 years, three of which she was employed at Irwin county detention center in Georgia, which is run by private corporation LaSalle Corrections. The complaint, filed on her behalf on 14 September, accused the center of negligence, including poor safety precautions surrounding Covid-19 and generally hazardous and unsanitary conditions.
Immigrants who spoke out against these conditions were regularly pushed into solitary confinement, the complaint said. Wooten says she was demoted and reprimanded when she spoke out about these practices, according to an interview with the Intercept.
The Intercept also reported that Wooten’s account was “bolstered by interviews with another current member of Irwin’s medical staff – who asked not to be named for fear of retaliation – and four people currently or recently detained there”. 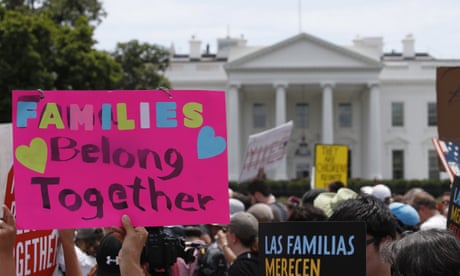 Read more
According to the new complaint, Wooten reported an alarmingly high rate of hysterectomies – a surgery in which part or all of the uterus is removed – being performed on Spanish-speaking immigrants, many of whom did not appear to understand why they had undergone the procedure.
She said an off-site doctor supposedly performed the surgeries on women who complained of heavy menstrual cycles, but that many women seemed to not understand what had happened. In many cases nurses obtained consent from patients by “simply googling Spanish”, the complaint alleges.
“Everybody he sees has a hysterectomy – just about everybody,” Wooten said. “That’s his specialty, he’s the uterus collector. Everybody’s uterus cannot be that bad.”
The complaint also alleges health and safety violations related to the procedures. One woman said she was not properly anesthetized during a procedure and overheard the doctor say he had mistakenly removed the wrong ovary, rendering her unable to have children. Another went in to have a cyst drained and ultimately got a hysterectomy instead, the complaint said.
“When I met all these women who had had surgeries, I thought this was like an experimental concentration camp. It was like they’re experimenting with our bodies,” one detainee said, according to the complaint.
Project South, one of the human rights groups that filed the complaint, had previously filed a report in 2017 regarding Irwin’s poor treatment of detainees, including unsanitary conditions, inedible food and refusing medical care to detainees. “This place is not equipped for humans,” one detained immigrant at Irwin told Project South at the time.
Conditions have “only worsened” in the face of Covid-19 threats, the complaint says. The facility has refused to test detained immigrants for Covid-19 in a timely manner, concealed numbers of positive tests and mixed those who have been exposed to Covid-19 with those who have not, according to the complaint.
“There is no social distancing possible in a detention center,” said Azadeh Shahshahani, a human rights attorney at Project South. “We are calling for people to be freed immediately, and we have been calling for this facility to be shut down for a long time.”
Shahshahani said the groups also plan to file these documents to Congress as well as to the United Nations. The United Nations defines “imposing measures intended to prevent births within the group” as an act of genocide, a crime under international law.
“These are gross human rights violations, and the US government should be held accountable,” she said. She added that Irwin detention center is not unique: Project South filed similar complaints against the Stewart detention center, another location in Georgia where detainees have alleged abuse.
LaSalle Corrections did not respond to request for comment. When reached by phone, an employee at the Irwin county detention center declined to comment or answer how many immigrants are currently housed there, but according to the company’s website the location houses up to 1,201 people. Ice did not immediately respond to request for comment"
Ice detainees faced medical neglect and hysterectomies, whistleblower alleges | US news | The Guardian
Posted by John H Armwood II at 7:43 AM