Our land was taken. But we still hold the knowledge of how to stop mega-fires | Bill Tripp | Opinion | The Guardian 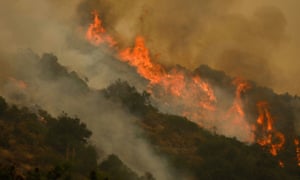 "Our land was taken. But we still hold the knowledge of how to stop mega-fires

As wildfires rage across California, it saddens me that Indigenous peoples’ millennia-long practice of cultural burning has been ignored in favor of fire suppression.

But it breaks my heart, that regardless of our attempts to retain our cultural heritage and manage our homelands in a manner consistent with our Indigenous customs, the Slater fire is burning down the homes of our tribal members, our tribal staff and our community.

Prescribed fire and cultural burns are fires that are intentionally set during favorable conditions, sometimes at regular intervals to achieve a variety of socio-ecological benefits. They reduce the density of small trees, brush, grass and leaves that otherwise fuel severe wildfires. Clearing undergrowth allows for a greater variety of trees and a healthier forest that is more fire-resistant, and it provides more room for wildlife to roam with beneficial effects such as enhancing the success of our hunting. Fire suppression, meanwhile, involves extinguishing fires using teams of people, bulldozers, fire engines, helicopters and airplanes by land management agencies assigned that duty by federal, state and local governments.

Our land was taken from us long ago and our Indigenous stewardship responsibility was taken from us too. The land is still sacred and it will forever be part of us. We hold the knowledge of fire, forests, water, plants and animals that is needed to revitalize our human connection and responsibility to this land. If enabled, we can overcome our current situation and teach others how to get it done across the western United States.

In 1850, the California legislature passed a law that essentially forced many Indigenous people into servitude and criminalized Indigenous burning. This was followed by the creation of the National Forest System and the focused suppression of our cultural burning practices in northern California. Karuk people were shot for burning even as late as the 1930s. Federal laws were created that were interpreted to call for fire suppression, but were not to have an impact on hunting and fishing.

In fact, the courts have deemed that Karuk people are not Indians of a reservation. We remain a sovereign, independent nation occupying our original homelands. That is supposed to mean something. Yet our hunting and fishing areas are diminishing, while forests burn at larger scales and more sediment is added to our streams.

Joe Jerry conducts a prescribed burn using a drip torch. Prescribed burns may have cultural objectives, but they tend to be planned primarily for clearing the leaves, brush and small trees that fuel large wildfires.

Joe Jerry conducts a prescribed burn using a drip torch. Prescribed burns may have cultural objectives, but they tend to be planned primarily for clearing the leaves, brush and small trees that fuel large wildfires. Photograph: Courtesy of Stormy Staats, KSMC

Fire itself is sacred. It renews life. It shades rivers and cools the water’s temperature. It clears brush and makes for sufficient food for large animals. It changes the molecular structure of traditional food and fiber resources making them nutrient dense and more pliable. Fire does so much more than western science currently understands.

The Red Salmon Complex fire is currently burning on an area sacred to the Karuk people. Our sacred values are negatively impacted when state and federal land agencies dig fire lines with bulldozers and send hundreds of people into places where only a few at a time should go. Rare endemic plants get trampled, archaeological evidence gets rearranged and chemicals get dumped into the watersheds we drink from and salmon inhabit. Indigenous peoples have to respond to protect these things.

The space we traditionally visit for solitude, prayer and carrying out cultural burning has become a space of turmoil, sorrow and trauma. That’s why many Indigenous people have been fighting to use fire in the right way all our lives.

In recent decades, our area has been plagued by large fires, including the Big Bar Complex fire in 1999, the Backbone Complex fire in 2009, and the Butler fire in 2013. Time and time again we find ourselves dropping everything to respond to fire suppression activities while trying to keep up the fight to revitalize our Indigenous responsibility as we witness our culture being destroyed. The federal and state governments spend billions of dollars each year fighting wildfires in California while putting very little toward prescribed burning, or understanding that cultural burning can and should be practiced.

The solution is to burn like our Indigenous ancestors have done for millennia. But too often we are told we can’t burn

We know the solution is to burn like our Indigenous ancestors have done for millennia. But too often we are told we can’t burn. Simply put, it’s either because we don’t have the proper environmental clearance for burning under the National Environmental Policy Act, because of liability or because there aren’t enough personnel available to supervise the burn. This year it is because smoke will be bad for Covid-19 patients.

These are excuses, not solutions. We carry the same qualifications as the federal and state agencies when it comes to prescribed burning or otherwise managing fire, and we hold the Indigenous knowledge that is needed to get the job done right. We have the knowledge to conduct cultural burning that is perfectly safe, and in many cases, we do not even need fire lines. Yet the federal agencies still do not allow us to lead prescribed burns on lands administered by the National Forest System.

We will not let these things stop us. We will just burn for another year on the 2% of the landscape that is held as private land and not considered part of the national forest. We will continue to build our own funding sources like the Endowment for Eco-Cultural Revitalization Fund. We will continue to fight for our Indigenous rights and tribal sovereignty to be taken seriously. Overcoming the structural racism at the root of this problem has been a multi-generational task. It shouldn’t have to be.

Frequent prescribed fire and support for cultural burns conducted by individuals and families is the solution proposed by the Karuk Tribe and Western Klamath Restoration Partnership. We can do this, and we can do it together, but we need to permanently fund tribal programs that are engaged in shared stewardship activities, and allow Indigenous people to lead the way.

Bill Tripp is the director of natural resources and environmental policy for the Karuk Tribe Department of Natural Resources. "

Our land was taken. But we still hold the knowledge of how to stop mega-fires | Bill Tripp | Opinion | The Guardian
Posted by John H Armwood II at 7:16 PM