“The senior administration official who dabbles in white nationalism is just getting started. “Stephen’s in charge,” Trump once said. 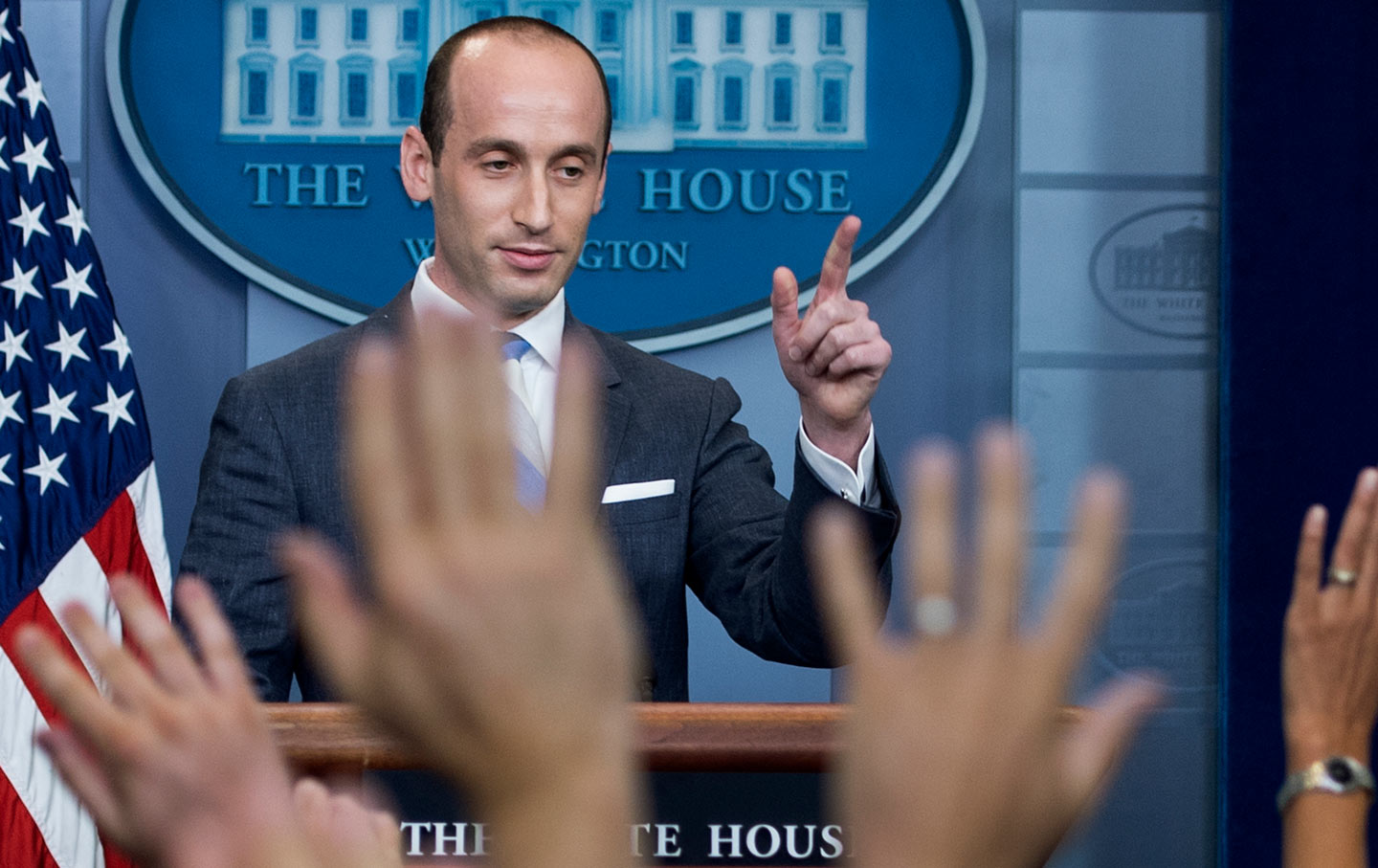 Stephen Miller has a special place in Donald Trump’s heart. A public relations flack who hijacked the Department of Homeland Security in his early 30s, Miller has long exerted outsize influence on his boss because of his particular brand of expertise in the issue that got Trump elected: immigration. In a March 2019 meeting about a rise in border apprehensions, Trump indicated that he was frustrated with everyone else. “Stephen’s in charge,” he said. Miller referred to it in a subsequent conversation with a former senior administration official who worked closely with him on immigration issues as his “coronation.”

Now, in a pandemic-ravaged United States, immigration has lost salience for the average American. Only about 51 percent of registered voters say it’s a top issue for them, according to the Pew Research Center—down from 70 percent four years ago. If Trump is reelected, Miller, an idealogue with an affinity for white nationalism, has a wish list of immigration items he has yet to pursue because they were deemed too politically risky ahead of November, according to current and former Trump administration officials I interviewed for my book Hatemonger: Stephen Miller, Donald Trump and the White Nationalist Agenda. And it goes far beyond what he recently told NBC about his plans.

Miller has already succeeded in gutting asylum at the southwest border, restricting access to green cards, suspending travel from Muslim-majority countries, separating families at the border, locking up children, slashing refugee admissions to historic lows, and torching the vision of America as a haven for the poor and the persecuted. While Trump claims that his policies target criminals and cartels, for Miller they’re about deterring, deporting, and denying entry to Black and brown people who may, as he sees it, have children and enhance what he believes to be the apocalyptic threat of “multiculturalism,” per his white-supremacist reading preferences.

In a second Trump term, Miller would have even freer rein. “Stephen knows that, in a second term, the president will feel unencumbered—and far less receptive to his communications and legal teams telling him he can’t do something because it will be politically damaging, or illegal,” former Trump Homeland Security chief of staff Miles Taylor, the anonymous official who wrote a New York Times op-ed in 2018 criticizing the president, told me in an interview last month. (Taylor is facing criticism for previously defending the policies he has come to criticize.)

Among Miller’s top priorities if Trump is reelected would be an attack on birthright citizenship, rooted in the 14th Amendment of the Constitution that says that “all persons born or naturalized in the United States and subject to the jurisdiction thereof” are citizens. Xenophobes, white supremacists, and other bigots argue that birthright citizenship is a magnet for people from the “Third World” to come and have “anchor babies,” according to some of the white nationalist publications Miller has recommended to others, according to the Southern Poverty Law Center.

Miller’s attack on birthright citizenship would likely come in the form of an executive order, according to a current DHS official. The expectation would be that it would be legally challenged and ultimately end up in the Supreme Court, where Miller hopes for a new interpretation of the 14th Amendment to exclude the children of people who lack legal immigration status.

It’s reasonable to suspect that the tortured legal arguments supporting this policy would come from the Claremont Institute, a California-based think tank that promotes racist ideas, including that diversity spells our doom. Its “scholars” were behind the birther lie about Kamala Harris and have cheekily debated the merits of eugenics. Last year, Trump awarded the institute with a National Humanities Medal. (Former president Barack Obama gave the medal to renowned Chicano author Rudolfo Anaya, among others.) Miller’s parents have donated to the Claremont Institute. When conservatives refer to an alleged debate among legal scholars about the meaning of the 14th Amendment, they’re talking about the Claremont Institute. It’s not up for debate elsewhere.

Taylor said that in a second term, Miller would also expand the Muslim ban to include other countries with mostly nonwhite populations by relying on Section 212(F) of the Immigration and Nationality Act, which gives the president authority to “suspend the entry of all aliens or any class of aliens as immigrants or nonimmigrants,” if deemed “detrimental to the interests of the United States.” Taylor told me, “They’re going to go hog-wild on using the 212F authority to block people from countries they don’t like.”

In just under four years, Miller has transformed the DHS, with its mandate to protect the country from a range of threats, into a political weapon targeting families from Latin America, Africa, and the Middle East—and, recently, American citizens protesting systemic racism. Current and former administration officials believe the continued politicization of the DHS would distract from threats of domestic terrorism, election interference, and pandemics.

For months, as Covid-19 has taken over the public consciousness, immigration has become less of a concern for most people–but not for Trump. He’s used the pandemic response as an excuse to suspend green card processing and turn away refugees.

Since Trump took office, Miller has weaponized the DHS for his extremist goals in partnership with the far-right leaders of the Border Patrol and Immigration and Customs Enforcement (ICE) unions, whose endorsements he secured for Trump in 2016 by promising them a role in making policies. “The Border Patrol union’s role has been one of the most damaging aspects for CBP,” a former Trump senior Homeland Security official told me in a recent interview. “By becoming a political arm of the Trump campaign and taking very vocal positions, they have put the agency at odds with an entire political party and even a moderate wing of the Republican side. That could have lasting and damaging impacts.”

News of the Trump administration’s increased politicization of the DHS has ramped up the sense of urgency and anger among movements and activists determined to dismantle the department or parts of it, including the push to #AbolishICE. DHS officials fear that the conflation in the public mind of their work with Miller’s fanaticism will energize efforts to constrain the department or compromise congressional funding. “The politicization of DHS ultimately could threaten the structure and organization of the department itself,” the former senior official told me, citing as an example the possible dissolution of ICE.

Miller has already led a purge of DHS leadership, such as the removal of Francis Cissna and Kirstjen Nielsen in 2019, leaving top positions vacant or held by people in an acting capacity, making manipulation easier. This includes the department’s current acting secretary, Chad Wolf. “Stephen Miller has thoroughly hypnotized Chad Wolf,” a former senior administration official told me in a recent interview. “Stephen would call Chad Wolf on an almost daily basis and basically, through a verbal war of attrition, convinced Wolf that his job and his career in the administration depend on him doing what the president wants on immigration and shutting up about policies he disagrees with. And over time that verbal war of attrition has actually turned into hypnosis and Chad has become what appears from the outside to be a true believer.”

Wolf did not respond to a request for comment.

In a second term, Miller would push for eliminating all temporary protected status programs; making the citizenship test and process more difficult; restricting access for international students; slashing refugee admissions to zero; further restricting asylum, green cards, and work visas; and more, according to current and former administration officials who worked on immigration policy with Miller. He would significantly intensify a federal crackdown on Democratic-leaning jurisdictions, particularly those with “sanctuary” policies that limit coordination with ICE. Many of those jurisdictions limit cooperation with ICE for public safety reasons—to encourage people in immigrant communities to report crimes to the police. Cities that oppose Trump’s policies are among Miller’s favorite adversaries, in addition to immigrants, which explains his advocacy for the DHS presence in Portland during the summer.

Miller is a master of vilification: He created an office within the DHS dedicated to vilifying immigrants, inserted graphic descriptions of crimes committed by immigrants into Trump’s speeches, and generally shaped the president’s apocalyptic language—from “American carnage” to “far-left fascism”—linking immigration and Democrats with the destruction of the United States. There’s no reason to believe that his hatemongering against people of color, anti-racists, and anti-fascists through the president’s rhetoric—courting the rage that fuels white terrorism, the top threat to this country’s security—would stop because Trump’s first term has ended. If anything, a second term will unleash Miller, because Trump won’t have to face the electoral consequences for his administration’s actions. In my book Hatemonger, I wrote that Miller learned as a teenager how to invert the language of the civil rights movement to attack it, such as characterizing white people rather than people of color as victims of racial discrimination. In a second term, anyone to the left of Miller, including moderate Republicans, would be labeled fascists, racists, and terrorists by Trump and Miller.“