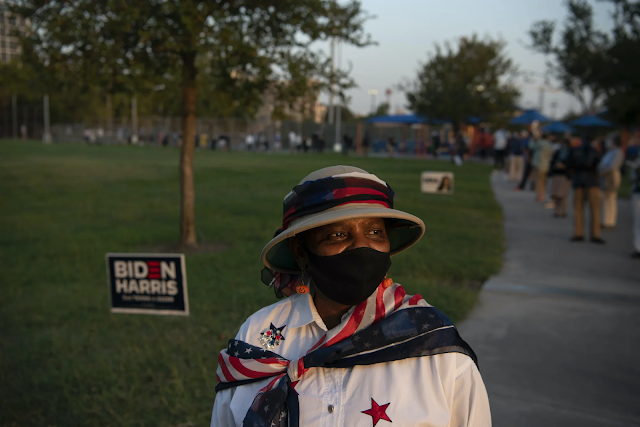 "I am beyond sick of America.  Where are the White moderates and so-called liberals?  I can hear the crickets.
"On Tuesday night, Republican election board members in Wayne County, Michigan refused to certify the election results in an attempt to delay President-elect Joe Biden's victory over Donald Trump. According to the New York Times, one of the canvassers, Monica Palmer, who is white, said they would “certify results in communities other than the city of Detroit.” While they ultimately backtracked hours later after a massive outcry, this blatantly partisan act of voter suppression made it clear just who Republicans are targeting in their aimless bid to discredit the election results: Black voters. The Times noted that Biden received nearly 95 percent of the vote in Detroit, which is more than 75% Black. “The rest of Wayne County, which voted for Mr. Biden by a smaller margin, is more than three-quarters white.”
Despite already losing a number of dubious legal challenges, Trump campaign lawyers, led by Rudy Giuliani, continue trying to manifest an impossible win for a candidate beaten decisively in the electoral college and popular vote. In Michigan, according to Mother Jones, “The Trump campaign has filed litigation to throw out the results in only Wayne County.” This would disenfranchise 750,000 voters and at least half the state’s Black population. (Trump campaign legal adviser Jenna Ellis applauded the Wayne board initially being deadlocked on Tuesday night—and floated the prospect of Michigan’s majority-Republican state legislature eventually picking pro-Trump electors.) Similar attempts have been made in Wisconsin and Pennsylvania, with the Trump campaign's legal team focused on throwing out votes cast in Philadelphia, a city that happens to be 44% Black and where nearly half of the state’s Black voters reside.
The targeting of Black voters by Trump’s team is nothing new. The 2016 digital campaign team reportedly sought to deter Black voters in Georgia, Wisconsin and North Carolina from showing up to the polls via social media ads spreading misinformation. Shortly before Election Day, Cliff Albright, an Atlanta resident and co-founder of the Black Voters Matter fund, told my colleague Chris Smith, "What I’m more worried about is voter suppression, in all its forms. We already had a white woman who pulled out a gun and was threatening organizers who were giving out food and water at a polling place in Albany, Georgia.”
In Georgia, where Biden narrowly won—the first time for a Democratic presidential candidate since 1992— tensions are running high with two run-offs scheduled for January that will determine which party controls the U.S. senate. Voter suppression has been a major concern in Georgia, especially after many Black voters were purged from the rolls or had their registration blocked during the 2018 gubernatorial race between then-Secretary of State Brian Kemp and former Georgia house of representatives minority leader Stacey Abrams. The current Georgia Secretary of State, Republican Brad Raffensperger, has described pressure from members within his party, including South Carolina Senator Lindsay Graham, to either step down or throw out enough votes to tip the state in Trump's favor. Though Graham dismissed the suggestion he called for tossing legal ballots, Raffenberger has stood by his account—and defended the work of officials in his state in a CNN interview. "We feel confident the election officials did their job," he said."
Trump Wants to Steal the Election by Disenfranchising Thousands of Black Voters | Vanity Fair
Posted by John H Armwood II at 6:16 PM