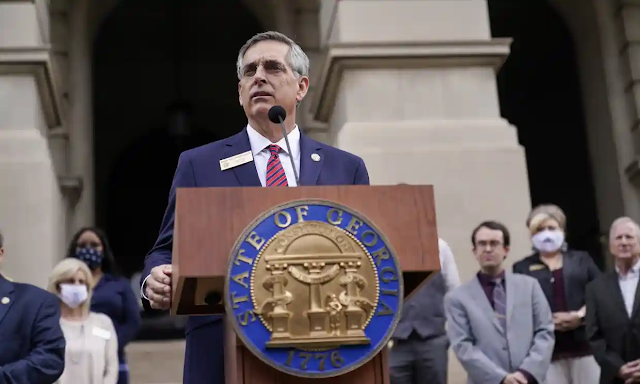 "Of all the Republicans to push back on Donald Trump’s baseless claims about voter fraud, Brad Raffensperger, the mild-mannered top election official in Georgia, did not seem like a likely candidate.
It was just a few months ago that civil rights groups called on Raffensperger, Georgia’s secretary of state, to resign from his position after voters spent hours waiting to vote in the primary election. He also faced criticism for declining to mail an absentee ballot application to all voters for the general election – something he did in the primary. And he raised alarms by creating an election fraud taskforce and trumpeting potential voter fraud prosecutions with little context.
But after Trump lost Georgia to Joe Biden by around 13,000 votes, Raffensperger has emerged as one of the few Republican officials across the US who has aggressively disputed Trump’s baseless claims that fraud tainted the election result in the state. Trump, who endorsed Raffensperger in 2018, is now directing his ire at the secretary of state, and Georgia’s two Republican senators, both locked in separate runoff contests against Democrats, have called on Raffensperger to resign.
Raffensperger, who is quarantining after his wife tested positive for Covid-19, continued to push back on the attacks against his office on Wednesday, saying Trump’s loss in the state – long considered a Republican stronghold – was the candidate’s fault.
“I’m a conservative Republican. Yes, I wanted President Trump to win. But as secretary of state we have to do our job,” he said in an interview with the Guardian. “I’m gonna walk that fine, straight, line with integrity. I think that integrity still matters.”
He added there were 24,000 Republicans who voted by mail in Georgia’s primary, but did not turn out to vote in November. Those voters didn’t vote again in November, Raffensperger suggested, because Trump railed against voting by mail.
“Voters listened to the president, they didn’t show up,” he said. “That would have been a 10,000 person cushion that President Trump would have had if those folks would have come back out. They just stayed at home.”
“Democrats really strongly pushed it,” he added. “I hope that, as a Republican, our party becomes very active.”
Raffensperger says he has tried to use a fact-based approach to push back on false claims thrown at his state. When Republicans complained about the voting machines in Georgia, the state completed an audit on a random sampling of machines in six counties and found no tampering.
“We keep trying to knock down these rumors. But it’s like whack-a-mole. It’s a rumor mill not supported by fact,” he said.
He noted that the CDC said just before election day that voters with Covid-19 could vote in person, which might have scared off older voters from showing up at the polls.
Election personnel sort ballots in preparation for an audit on 7 November 2020 in Lawrenceville, Georgia. Photograph: Elijah Nouvelage/Getty Images
Election personnel sort ballots in preparation for an audit on 7 November 2020 in Lawrenceville, Georgia. Photograph: Elijah Nouvelage/Getty Images
“It’s really those little things that turned out to be big things. It’s not the machines, and it’s not the process.”
Georgia counties completed a painstaking hand audit of the presidential race on Wednesday. While Trump and his allies have seized on changing vote totals in some places as evidence of wrongdoing, Raffensperger has repeatedly said there is no evidence of fraud.
Raffensperger told the Washington Post earlier this week that Senator Lindsey Graham, a South Carolina Republican, tried to pressure him to reject legally cast ballots in places where there were signature mismatch issues. Conservatives, including the prominent Georgia attorney Lin Wood, have recently objected to a March court agreement that provides additional procedures for reviewing signatures, including timely notification of a voter if there is an issue with it.
“My take on it was different than [Graham’s] so we’re moving on,” Raffensperger said. “It’s pretty clear that Senator Graham, President Trump, and this attorney Lin Wood, they’re all on the same page. They didn’t understand the laws here in Georgia, and so we strengthened signature match and we have a process for that.”
He did criticize Doug Collins, the Republican Georgia congressman who is helping lead Trump’s recount effort.
“Doug Collins did nothing when he was in the statehouse nor when he was in Congress for those two years for any kind of election reform bill. He did nothing. And now he’s somehow running the president’s review here?,” he said. “This man did nothing about any of the federal laws that actually have really caused us taxpayer cost with these federal lawsuits that we’ve had in federal courts.”
Raffensperger and his wife have faced death threats since election day – something election officials around the US have reported as Trump continues to stoke baseless accusations about fraud. And Raffensperger said it was “sad” to see it coming from his own party.
“For the last, how many months, everyone on our side was talking about all these leftwing radical groups … And then you have people on our side start talking in that same inflammatory language,” he said. “This is a family feud, but we’re going to have to put boundaries on that. We have to talk to each other and lower the rhetoric.”
He added that he intends to run for re-election in 2022, and that if he lost, he would accept the result.
“Everyone has to decide how they want to run their life. I know that if I win, I want to win honestly. And if I lose, I want to lose honestly. And if I lose, I can go back and do other things,” he said. “I’m not gonna complain about the process.”
'Integrity still matters': the unlikely Republican standing up to Trump's voter fraud lies | US news | The Guardian
Posted by John H Armwood II at 8:53 AM