Joe Biden needs Black voters. So why does he keep insulting us? | Benjamin Dixon | Opinion | The Guardian 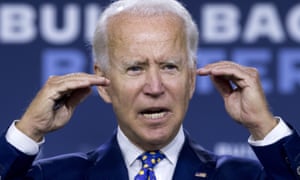 "If the 2020 election was left up to white Americans, Donald Trump would be given a second term. According to the recent Hill-HarrisX poll, 50% of white voters would vote for Trump if the election were held today. So once again, it is up to Black voters to save America from itself.


But when one considers how drastically the Democratic party needs the Black vote to perform for their candidate to win – according to some estimates, they need turnout rate of 65% of all Black Americans and, of that group, nearly 90% of Black voters must vote for Democrats for them to secure the White House – one must question why Joe Biden is allowed to continue speaking when every other statement he makes about Black people is “problematic” if you’re trying to spin it and out-right racist if you’re being honest.
Black Americans who are not dutiful members of the political establishment – whose job it is to explain away every bumbling and insulting thing the Democratic party’s forced pick spits up – are rightly upset at the fact that Joe’s own words are making Trump’s re-election more likely.
If anyone on team Joe is under the impression that 2020 is a slam dunk, one only needs to look at the recent polling to understand this isn’t true. White America has a commitment to Trump that is unmoved by the fact that 160,000+ Americans have died as a result of his absurd and criminally pathetic response to Covid-19.
The economy has tanked, but 48% of Americans making over $75,000 a year still support Trump as opposed to 39% for Biden. Perhaps most disturbingly in that poll, Trump leads with independent voters – albeit within the margin of error.
The bottom line is, Biden is by no means a shoo-in. And to that end, it would be best for his campaign to level with Joe about the Black vote: don’t let the Black Democratic Establishment types like Jim Clyburn and Keisha Lance Bottoms fool you: the Black voters you need are not excited about your candidacy.
Black voters understand that we are disproportionately victims of Covid-19. And, there is a high possibility that as a result of Donald Trump’s weaponized ignorance, America could see 500,000 deaths from which Black people will disproportionately bear the burden.
Biden cannot win the general election solely with the Black super voters the likes of whom helped him carry South Carolina. To defeat Trump and his coalition of fraudulently-aggrieved white Americans, Biden will need the votes of Black people who, quite frankly, do not like him and have to convince ourselves anew every morning that we’re voting to remove Trump and not to support him.
But if Biden’s team continues to allow him to believe that he has some preferred seat in the Black community that gives him the right to comment on our Blackness, then America may wake up November 4th to the unthinkable nightmare that White America has successfully re-elected the White-Supremacist-In-Chief who has presided over the deaths of 160,000 Americans, 40+ million job losses, 5.4 million newly uninsured during a pandemic, and one third of this country unable to pay their rent.
And if this were to happen, it would be the fault of no one else but white voters, their laughably-fictionalized aggrievement complex, their commitment to a racist president, and Biden’s inability to stop speaking about Black Americans as if he hasn’t learned a single thing since vigorously pushing the 1994 crime bill into law.
And perhaps that is the real problem."

Joe Biden needs Black voters. So why does he keep insulting us? | Benjamin Dixon | Opinion | The Guardian
Posted by John H Armwood II at 8:41 PM