What Happened in Portland? Here’s What We Know A man was shot and killed after supporters of President Trump clashed with counterprotesters.

What Happened in Portland? Here’s What We Know 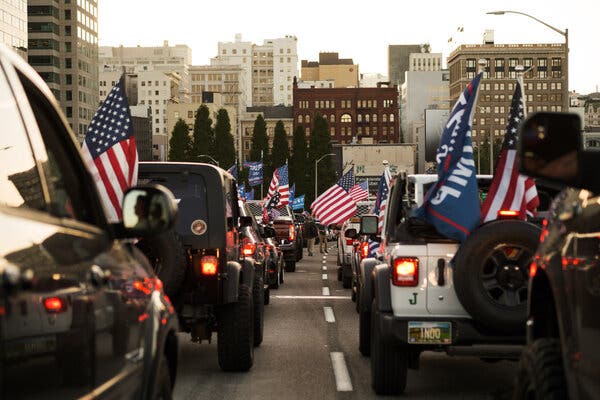 On Saturday night, a caravan of supporters of President Trump traveled through Portland, Ore., and clashed with counterprotesters. A man was shot and killed during the unrest.Photo by: ...Mason Trinca for The New York Times

“Portland, Ore., has had nightly protests since the killing of George Floyd in Minneapolis.

On Saturday night, a caravan of supporters of President Trump traveled through the city, clashing with counterprotesters. A man was shot and killed during the unrest.

Here’s what we know so far.

What happened in Portland?

Supporters of the president gathered on Saturday at a shopping center a few miles southeast of Portland. The caravan of hundreds of trucks then traveled into the city. Most were flying “Trump 2020” or thin blue lineflags, which are commonly associated with support for the police and often seen as antithetical to the Black Lives Matter movement.

The caravan clashed with counterprotesters at times. People shot paintball guns from trucks and protesters threw objects at them. Some conflicts devolved into fistfights in the streets. A video showed a small group in the street, where gunfire erupts and a man collapses.

Police Chief Chuck Lovell said the caravan stretched for miles and there were pockets of violence. The police tried to take precautionary measures to prevent vehicles from making their way downtown.

“We have limited resources,” Chief Lovell said at a news conference on Sunday. “We can’t be everywhere at the same time.”

Portland police officers heard reports of gunfire shortly before 9 p.m. local time and found a man with a gunshot wound to the chest, the police said.

Medical responders determined that the man was dead, the police said.

Officials asked people to not jump to conclusions about what happened and to stay away from Portland as some have expressed a desire to seek retribution.

Who was the man who died?

The man’s identity has not been released.

He was wearing a hat with the insignia of Patriot Prayer, a far-right group based in the Portland area. The group says it seeks to combat “corruption, big government and tyranny, using God for strength and the power of love,” according to its Facebook page, which has more than 40,000 followers.

A Patriot Prayer leader, Joey Gibson, said on Sunday that the man was a good friend and a supporter of the group, but he did not offer further details.

Do we know who the gunman was?

The police have not released information about who fired the shots.

Chief Lovell said on Sunday that the police were “working diligently to find and apprehend the individual or individuals responsible.”

The police said on Sunday that they had concluded an investigation of the shooting scene and asked witnesses or those with video of the episode to contact detectives.

What else has been happening in Portland?

Protests have occurred nightly in the city since the killing of George Floyd in May.

In recent weeks, right- and left-wing groups have clashed. On Aug. 22, a demonstration outside the U.S. courthouse in Portland turned violent as right-wing demonstrators, including Proud Boys members, clashed with Black Lives Matter protesters. Objects were thrown, paintballs were fired and shouting turned to shoving and punching.

The city is no stranger to demonstrations that devolve into chaos, often stoked by conflicts with the police or between opposing groups.

In 2016, protests over Mr. Trump’s election were marred by vandalism and fires. The unrest was labeled a riot by the police, who deployed pepper spray and rubber “distraction devices” against the crowd.

In August 2018, Mr. Gibson led a demonstration that drew hundreds of Patriot Prayer supporters, many from outside the state, The Oregonian reported. Counterprotesters were ordered by the police to disperse before officers deployed flash-bang grenades and shoved counterprotesters out of the street.

Last month, camouflaged federal agents were sent to the city, against the wishes of the local authorities.

What has President Trump said about the situation?

Mr. Trump has not spoken specifically about the shooting death in Portland, but on Sunday morning he retweeted a message that said Portland “needs to be federalized at this point.”

Mr. Trump added to the message: “The National Guard is Ready, Willing and Able. All the Governor has to do is call!”

In another tweet, Mr. Trump said the “big backlash going on in Portland cannot be unexpected.” He called Portland’s mayor, Ted Wheeler, “incompetent” and “a FOOL,” adding that “the people of Portland won’t put up with no safety any longer.”

On Sunday afternoon, the mayor sharply criticized Mr. Trump, saying the president wanted Mr. Wheeler to “stop the violence that you helped create.”

“Do you wonder, Mr. President, why this is the first time in decades that Americans have seen this level of violence?” Mr. Wheeler said. “It’s you who have created the hate and the division.”

Mr. Wheeler said the caravan was “supported and energized” by Mr. Trump.

“I’d appreciate that either the president support us or he stay the hell out of the way,” Mr. Wheeler said.