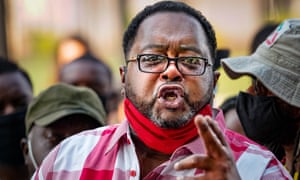 Racism is at the core of American policing. It is not just a few bad apples. It is the structure of policing, the society from which police are hired and the fact police departments are an employer of last resort for many poorly educated and not very intelligent White working-class families. They have always been the pawns, the peons, who enforce America's class and caste hierarchy.

"Jacob Blake, the 29-year-old who was shot seven times by a Kenosha, Wisconsin, police officer on Sunday, is shackled to his hospital bed despite being unable to walk and being heavily medicated, with no clarity on whether or why he might be under investigation, his father revealed on Friday.


“There was the cold steel on his ankle. He is shackled to the bed, but he cannot get up, he could not get up, he is paralyzed,” Jacob Blake Sr, father of Jacob Blake Jr, said on CNN in an interview, describing a hospital visit he had with his son two days ago.
“He grabbed my hands and began to weep and he told me that he was having hallucinations. He said ‘Daddy, Daddy, I love you. Why did they shoot me so many times?’ I said, ‘Baby, they were not supposed to shoot you at all,” Blake Sr said.
He wept intermittently as he was giving the live interview on Friday morning.
“I lay on the bed close to him. We talked about him being paralyzed from the waist down. He wanted a dog and I said, ‘We will get you a dog, Baby’.”
Lawyers acting for the Blake family have said Jacob Blake has damaged spinal cord, spine, stomach, kidneys and liver, has lost most of his colon and has no bowel or genital function.
Blake said he did not know why his son was shackled, saying: “I guess he is in custody, I don’t know.”
The family’s lawyer, Ben Crump, said: “There is no explanation for this.”
The description of Blake’s condition by his father came after the fifth night of protests in Kenosha, which were peaceful on Thursday night for the second night after a fatal shooting when agitators attacked protesters on Tuesday night.
Late on Tuesday, a 17-year-old gunman fatally shot two protesters and wounded another, police said. Before the slayings, some who did not appear to be linked to the main, peaceful protest groups engaged in looting.
The Kenosha News reported that there were no incidents of fire or vandalism as of 10.30pm on Thursday.
At Civic Center Park, some protesters sang along to religious music. Black Lives Activists of Kenosha, a major protest group, walked with flags to the sprawling local law enforcement complex. Several calmly spoke with two police officers to discuss the release of at least one detained demonstrator, the newspaper said.
Although protests appear to have calmed, with fierce emotions but no violence, additional national guard members are expected to arrive in Kenosha on Friday.
Wisconsin’s governor, Tony Evers, who first announced the deployment of state national guard members on Monday, has on several occasions authorized more troops. On Thursday, Evers said that national guard members from Alabama, Arizona and Michigan would be deployed to Kenosha, USA Today reported.
As the ranks of national guards members are poised to increase, law enforcement response to protests – which has included some use of teargas and flash-bangs – has come under scrutiny.
Activists have said that some demonstrators who were arrested in Kenosha this week were “snatched up” by federal law enforcement officers in unmarked vehicles, according to the Milwaukee Journal Sentinel. On Wednesday night, three area activists were arrested while walking to their vehicle, and then whisked away in an unmarked sports utility vehicle, organizers said.
Video on social media appears to show law enforcement agents smashing the windows of a minivan with Oregon license plates and forcibly removing the people inside. Those people were subsequently driven away in an SUV.
Police in Kenosha claimed that this group had been stopped after federal US Marshals spotted them allegedly filling gas cans at a gas station, reports said.
Authorities claim that they used force because the driver didn’t stop when ordered to do so. These arrestees were part of the group Riot Kitchen, a Seattle-based non-profit that gives food to homeless persons and protesters, the newspaper said.
Meanwhile, Kyle Rittenhouse – the teenager charged in relation to Tuesday’s deadly shootings – is expected to appear in an Illinois court on Friday.
Rittenhouse, who surrendered to authorities in his home town of Antioch, Illinois, about 15 miles from Kenosha, is charged with six criminal counts in Kenosha, including first-degree intentional homicide, attempted homicide and reckless endangerment.
Rittenhouse, who will be defended by the law firm whose high-profile clients include Donald Trump’s personal lawyer, Rudy Giuliani, and ex-adviser Carter Page, appears poised to claim self-defense in the shooting.
Lin Wood, another lawyer defending Rittenhouse, reportedly said: “He was not there to create trouble, but he found himself with his life threatened, and he had the right to protect himself.”
One man was killed while trying to disarm Rittenhouse after he had apparently earlier shot another demonstrator and appeared to be walking away while others attempted to give the victim first aid.
On Friday, more details emerged about police involved in Blake’s shooting. The Wisconsin department of justice, which previously named Rusten Sheskey as the officer who shot Blake in the back, identified two more officers present during the encounter: Vincent Arenas and Brittany Meronek.
The officers allege that Sheskey and Arenas used their Taser stun guns on Blake when their attempt “to stop” him during his arrest failed. Investigators said that Sheskey was the only officer who fired a weapon and that Blake had told the police he had a knife.
“There is no explanation for this,” Crump, the family lawyer, said of the police shooting Blake and of the report of Blake being shackled in hospital. “It’s such an outrageous thing. That he was shot seven times, this adds insult to injury. It’s why we are marching in Washington DC today.”
He was referring to the Get Your Knee Off Our Necks march, a protest demanding criminal justice reform that is expected to draw tens of thousands to Washington on Friday and coincides with the anniversary of Martin Luther King’s “I have a dream” speech in 1963 calling for racial equality."
Pocket - Jacob Blake shackled to hospital bed despite being paralyzed, father says
Posted by John H Armwood II at 8:19 AM