Trump Stomps on the Rules, but the Pandemic Isn’t as Easily Trampled - The New York Times 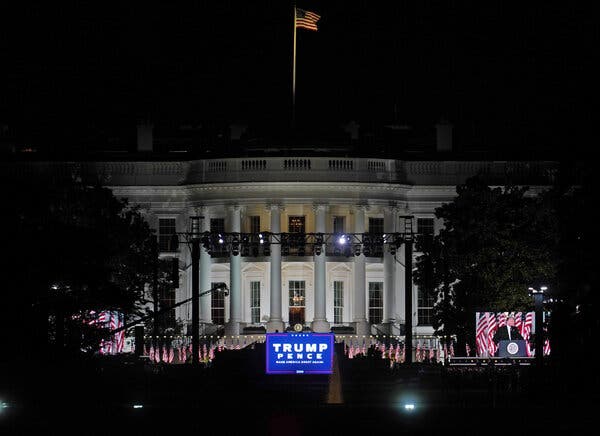 "President Trump made a dramatic entrance from the South Portico to deliver a searing attack on Joseph R. Biden Jr. and his party, seeking to transform the 2020 race from a referendum on his presidency and handling of the coronavirus pandemic into a choice between two starkly different visions of America.

He did this in front of the place he called “our beautiful and majestic White House” as TRUMP-PENCE signage filled the screens flanking the stage, the presidential seal affixed to his lectern. The South Lawn speech was the final demolition of the boundaries between governance and campaigning in a week full of such eroding.

“The fact is we’re here and they’re not,” he declared in a scene that tried to project an alternate reality that the continuing pandemic was under control and would soon be history.

The mostly maskless crowd, which broke into occasional “four more years” chants, was estimated at 1,500 — a gathering magnitudes larger than health officials have recommended.

But the virus wasn’t the theme of the evening. Mr. Biden was.

President Trump officially accepted his party’s renomination from the South Lawn at the White House, turning the setting into a partisan prop as no other president had.CreditCredit...Doug Mills/The New York Times

A partisan parade of senior government officials sang Mr. Trump’s praises earlier in the evening, many of them suggesting there’s an unseen and more thoughtful side of a man whose voice and Twitter fingers leave little private. “I can tell you, he really cares,” said Ja’Ron Smith, a White House adviser. “A kind and decent man,” added Dan Scavino, another top West Wing aide. Ivanka Trump, his daughter and adviser, spoke of the “the moments I wish every American could see.”

On Tuesday, there was an emotional presidential pardon engineered in the fashion of a reality show climax, and an immigration naturalization ceremony was held for the benefit of convention cameras, to the surprise of the participants.

The lengths Mr. Trump went to to recast his image reflected the urgency of an incumbent in trouble, a candidate trying to make up ground with the political equivalent of a makeover show. But by so cavalierly casting aside longstanding norms that separate the political from the official, the president demonstrated the sort of aberrant conduct that has made voters question his leadership in the first place.

“The approach to this convention was an abuse of presidential prerogatives, an abuse of the office,” said Tom Ridge, who served as Homeland Security secretary under President George W. Bush.

And yet the norm-bending was in service of a redesign that has little to do with the dominant issue driving the campaign.

The lengths Mr. Trump went to to recast his image reflected the urgency of an incumbent in trouble.Credit...Anna Moneymaker for The New York Times

Mr. Trump sought on Thursday to put an upbeat face on the country’s progress in combating the coronavirus, but he spent much of his speech unspooling his accomplishments.

What was striking was what he acknowledged at the start of his remarks — and which obviated much of his braggadocio. “We will again build the greatest economy in history,” he vowed, a promise that doubled as a confession that the virus robbed him of what was to be the centerpiece of his campaign.

He reframed attacks on himself as assaults on his loyal supporters: “Always remember, they are coming after me because I am fighting for you.”

Mr. Trump is seeking re-election in the midst of a pandemic that has upended the life of every American, with millions sickened, even more unemployed and about 180,000 dead. But his convention has been dedicated to softening his hard edges, sowing fear about Mr. Biden and much else besides the crisis that for over five months has been consuming voters.

Republicans believe he has little choice. Mr. Trump, they say, must make the election more of a choice between him and Mr. Biden than judgment on his stewardship of a country that even his own vice president acknowledged Wednesday is enduring “a time of testing.”

“They need to get into a debate about the future direction of the country,” Terry Nelson, a Republican strategist, said of the Trump campaign.

To do so, Mr. Trump is turning to a Rose Garden strategy that deploys the symbolic and muscular images of American government, going far beyond his predecessors. He’s turned the White House into a convention sound stage, including hosting a speech by the first lady, Melania Trump, on Tuesday in the Rose Garden itself.

“His entire life has been finding ways to break the rules that other people would observe and getting away with it,” said Michael D’Antonio, who has written a biography of Mr. Trump. “He thinks that people who respect the rules are foolish.”

Yet for all his willingness to wield the levers of government for his political gain, Mr. Trump had been reluctant to take action to mitigate the most significant threat to re-election bid.

He has been personally absent from the stalled negotiations with Congress over an economic aid package that would offer relief to businesses and workers devastated by the virus. He has mostly left the public mourning of nearly 180,000 Americans to others, refusing to show the sort of empathy that a number of speakers this week have insisted he possesses. And he has refused to model the kind of mask-wearing that health officials say could help stem the virus’s spread.

What Mr. Trump is most focused on when it comes to the virus is finding a vaccine (giving the effort the public-relations-friendly name “Operation Warp Speed”) or some sort of remedy as quickly as possible. It’s an urgency that has led him into endorsing unproven treatments, conflicts with his own agencies and a discourse on injecting people with disinfectants that left Republicans cringing and for a time halted his coronavirus briefings.

On Sunday, Mr. Trump hailed the emergency approval of blood plasma for hospitalized coronavirus patients as “a powerful therapy,” only to have scientists question the administration’s framing of the treatment. On Wednesday, Mr. Pence called America a “nation of miracles” and declared the country on track for a vaccine by the end of the year.

In a speech on Thursday afternoon in Washington, D.C., Senator Kamala Harris, Mr. Biden’s running mate, scalded the Trump ticket for its handling of the pandemic, saying the ongoing suffering was “completely absent from this week’s Republican National Convention.”

What was present was Mr. Trump’s deep imprint on a party that he has so thoroughly overtaken from the inside that Republican National Committee delegates this week actually bypassed adopting a formal party platform, opting instead “to enthusiastically support the president’s America-first agenda,” as the party resolution said.

On Thursday, for the third night in a row, the Trump campaign gathered a large crowd on federal property in an attempt to present an image of normalcy and a visual show of defiance of the pandemic that has kept millions of Americans inside their homes and out of work and will keep children away from schools this fall.

“Everything that Donald Trump does is in service to Donald Trump,” said Sarah Longwell, a founder of Republican Voters Against Trump. “It is ironic because the thing that would help him most in terms of getting him re-elected would be to do his job. But he tends to opt for the things that he’s more interested in and that is the optics around this convention.”

Still, Democrats worry the norms and rules smashed this week offer only a preview of the final rule-bending race to Election Day and beyond. Lawmakers have already begun to hold hearings on Trump administration maneuverings involving the Postal Service, and party lawyers have filed lawsuits to maximize voting by mail and the ability of people to vote during the pandemic. There are deep concerns about Mr. Trump’s words and threats to delegitimize the election results.

Mr. Ridge, who now serves as co-chair of the voting advocacy group VoteSafe, called Mr. Trump’s language around the election “narcissistic” and “self-serving.”

“The rhetoric from the White House has been about as unpresidential as anything citizens have ever heard prior to any national election,” said Mr. Ridge, who added that Mr. Trump’s willingness to flout ethics rules separating governance and politics during the convention heightened his concerns.

If Mr. Trump was willing to send troops to the border ahead of the 2018 midterms, and had federal law enforcement officials clear peaceful protesters in June for a photo op outside a church, what might he do now that he is the one on the ballot and behind in the polls as Election Day nears?

Mr. Trump was, after all, impeached by the Democrat-controlled House of Representatives last year for abuse of power, charged with corruptly using the levers of government to solicit help from Ukraine to discredit Mr. Biden — long before Mr. Biden had even emerged as the Democratic nominee. The Republican-led Senate later acquitted the president.

“He’s learned the wrong lessons,” said Representative Jerrold Nadler, who oversaw the impeachment proceedings as the chairman of the House Judiciary Committee. “He drew the message that it doesn’t matter what he did as long as he can get the Republicans, he can get away with anything.”

Worried about an asymmetrical fall fight, Democrats are increasingly showing some willingness to buck norms themselves. Earlier this week, Hillary Clinton said in a television interview that Mr. Biden “should not concede under any circumstances,” saying Democrats should “not give an inch” in the days and hours after the polls close in November. On Thursday, Nancy Pelosi, the House speaker, said she did not believe Mr. Biden should agree to debate Mr. Trump.

“I think that he’ll probably act in a way that is beneath the dignity of the presidency. He does that every day,” Ms. Pelosi said. The idea was quickly shot down by the Biden team.

Mr. Trump presented his version of the presidency on the South Lawn, wielding his office for political gain and savaging Mr. Biden as a threat to the country.

In the president’s telling, that was Mr. Biden."

Trump Stomps on the Rules, but the Pandemic Isn’t as Easily Trampled - The New York Times
Posted by John H Armwood II at 7:03 AM