In the Wake of Covid-19 Lockdowns, a Troubling Surge in Homicides - The New York Times 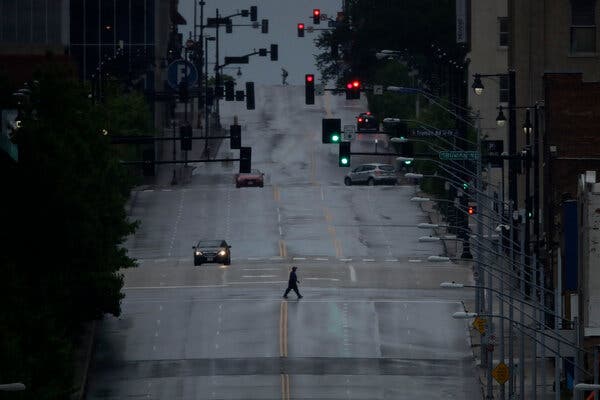 “People have gotten to the point where they just don’t give a damn,” said a minister in Kansas City, which is on pace for a record number of killings.

KANSAS CITY, Mo. — It started with an afternoon stop at a gas station. Two customers began exchanging angry stares near the pumps outside — and no one can explain exactly why.

That led to an argument, and it escalated quickly as one of them pulled a gun and they struggled over it, according to the police.

“There’s too many shootings. Please don’t do this,” the wife of one of the men pleaded, stepping between them.

But by the time the fight was over at the station on Kansas City’s East Side late last month, the all-too-familiar crackle of gunfire pierced the humid air, leaving another person dead in what has been an exceedingly bloody summer.

The onset of warm weather nearly always brings with it a spike in violent crime, but with much of the country emerging from weeks of lockdown from the coronavirus, the increase this year has been much steeper than usual.

Across 20 major cities, the murder rate at the end of June was on average 37 percent higher than it was at the end of May, according to Richard Rosenfeld, a criminologist at the University of Missouri-St. Louis. The increase over the same period a year ago was just 6 percent.

In few places has the bloodshed been more devastating than in Kansas City, where the city is on pace to shatter its record for homicides in a year. Much of it has involved incidents of random, angry violence like the conflict at the gas station — disputes between strangers that left someone dead, or killings that simply cannot be explained. They have claimed the lives of a pregnant woman pushing a stroller, a 4-year-old boy asleep in his grandmother’s home and a teenage girl sitting in a car.

They have also prompted a much-debated intervention from the federal government, an operation named after the 4-year-old Kansas City boy, LeGend Taliferro, that has sent federal law enforcement agents to at least six cities in an attempt to intervene.

“We’re surrounded by murder, and it’s almost like your number is up,” said Erica Mosby, whose niece, Diamon Eichelburger, 20, was the pregnant victim pushing the stroller in Kansas City. “It’s terrible.”

Nationally, crime remains at or near a generational low, and experts caution against drawing conclusions from just a few months.

But President Trump has used the rising homicide numbers to paint Democratic-led cities as out of control and to blame protests against police brutality that broke out after the killing of George Floyd in Minneapolis in late May.

“Extreme politicians have joined this anti-police crusade and relentlessly vilified our law enforcement heroes,” Mr. Trump said during a White House news conference last month to announce Operation LeGend. He added that “the effort to shut down policing in their own communities has led to a shocking explosion of shootings, killings, murders.”

Criminologists dispute the president’s suggestion that the increase is tied to any pullback by the police in response to criticism or defunding efforts, and fluctuations in the crime rate are notoriously hard to explain. In many cities, the murder rate was on the rise before the pandemic, and a steep decline in arrests coincided with the start of social distancing, as measured by mobile phone records, according to a database compiled by David Abrams, an economist at the University of Pennsylvania law school.

Some experts have pointed to the pandemic’s destabilization of community institutions, or theorized that people with a propensity for violence may have been less likely to heed stay-at-home orders. But in city after city, crime overall is down, including all types of major crime except murder, aggravated assault and in some places, car theft.

In New York, where murders are up 30 percent over last year, city and police officials have tried to lay blame on a new law that lets many defendants go free without posting bond, as well as on the coronavirus-related mass release of people from jail. But the evidence shows that a steep decline in gun arrests beginning in mid-May was a more likely cause. Police officials in several cities have said the protests diverted officers from crime-fighting duty or emboldened criminals.

In Detroit, Chief James Craig said violence spiked but has started to go down over the past two weekends. “We haven’t relaxed our enforcement posture like some cities,” he said.

In Kansas City, homicides have been on a swift upward trajectory from the time a 41-year-old man named Earl Finch III was gunned down in a driveway in broad daylight on Jan. 5, the first murder of the year. Even the coronavirus lockdown did not slow the violence, though as in other cities it has escalated even further in the wake of reopenings.

After six new deaths over the weekend, 122 people have been killed this year, compared with 90 through the same time last year. The city is well on its way to surpassing its grim record of 153 murders in 1993. And by the end of July the city had matched the number of nonfatal shootings — about 490 — that it had all of last year.

Much of the violence in Kansas City has had little rhyme or reason, often stemming from petty arguments that boil over.

The short fuses may indicate restlessness and anger, criminologists and law enforcement officials said. The police have attributed about 30 of the homicides this year to arguments, some involving people with no serious criminal history. Economic hardship also appeared to be a factor in some of the killings. Only 15 were deemed drug-related. In almost 50 cases, the police have not yet determined a motive.

While disparities in things like education and employment have long plagued Kansas City’s East Side, a predominantly Black part of the city that has the city’s highest murder rate, community leaders said there seemed to be an added sense of despair this year.

The Rev. Darren Faulkner, who runs a program that provides social support to those deemed most at risk of violence, said the latest wave of police killings of Black people has left many of his clients feeling hopelessly trapped in a system in which they will never thrive.

“People have gotten to the point where they just don’t give a damn,” he said. “I don’t care about me. I certainly don’t care about you. And so I can go shoot your house or shoot you right on the spot because you talked to me crazy, you looked at me crazy.”

“If people could settle an argument without having to resort to shooting, violence would reduce,” he said.

Another atypical trend this year is that in several cases, the gunmen and victims were not otherwise involved in criminal activity, Major Volker said, pointing to the gas station shooting in July.

The man now charged with murder in the case is a meatpacking worker, Isaac Knighten, 40, who devotes much of his time to mentoring Black men and boys, including teaching conflict resolution through Alpha Male Nation, a mentoring organization his brother started. His wife said he had turned his life around after serving time on drug charges from more than a decade ago.

After Mr. Knighten had a brief, hostile exchange with the other man in the parking lot, the man, Jayvon McCray, 28, pulled a gun and the men began to fight, according to the police.

Mr. Knighten’s wife, Shaynan, said in an interview that she had their five children get out of the car and run to a relative’s house nearby. She and Mr. McCray’s girlfriend both got between the men and urged them to calm down, according to the police.

Mr. Knighten eventually retrieved a gun from his car and fatally shot Mr. McCray, who the police said appeared to no longer be holding a gun.

Mr. Knighten’s lawyer, Dan Ross, said his client, who has been charged with second-degree murder, was defending himself. Surveillance footage shows that Mr. Knighten attempted to walk away from the dispute at least six times, but Mr. McCray kept coming after him, the lawyer said.

Another contributing factor to this year’s violence, Major Volker said, was the impact of the coronavirus stay-at-home order on the drug trade. Some dealers lost their regular buyers, so they sold to people they did not know — people who may have been intent on robbing them. The result has been an uptick in drug robberies and shootings, especially in late March and early April.

The real explosion of killings in Kansas City came in May and June, with 44 murders combined, more than twice as many during those same months last year.

“I’m sure there will be academic studies for years to come as to what caused the spike of 2020,” said Tim Garrison, the United States Attorney for the Western District of Missouri. “I’m sure the lockdown didn’t help. When you already have a stressed economic situation and you put a lot of folks out of work, and a lot of teenagers out of school, it’s a volatile situation.”

Mr. Garrison oversees Operation LeGend, a surge of some 200 federal agents into Kansas City in an effort to help stem the violence. It has been met with suspicion and street protests, in part because the operation coincided with a militaristic federal intervention on the streets of Portland that was widely criticized for inflaming tensions there.

Jean Peters Baker, the prosecutor in Jackson County, said that in the murder cases she has received from Operation LeGend so far, the federal agents did not appear to have contributed the forensic investigative expertise that the federal authorities had promised.

Mr. Garrison pointed to a more recent arrest by the U.S. Marshals Service, saying that federal investigators had linked a firearm found in the suspect’s possession to four other shootings.

The operation has been expanded to seven other cities, all but one of which have seen an increase in homicides over last year. Some officials have welcomed the help, while others have promised to monitor federal agents for civil rights violations.

The federal operation represents the latest in a string of efforts that Kansas City has undertaken to try to get its violence under control over the years. Homicides dropped to a near record low of 80 in 2014, after the launch of a joint federal-local operation known as the Kansas City No Violence Alliance. But murders began ticking back up in subsequent years, and the police pulled back from the program. The department plans to launch a new effort in September that focuses on getting the most persistent violent offenders off the streets.

Charron Powell, LeGend’s mother, said she gave permission for her son’s name to be used in the federal operation because she wanted the fight against violence to be his legacy. She called the killings “senseless” and said those responsible had met with too few consequences.

In the Wake of Covid-19 Lockdowns, a Troubling Surge in Homicides - The New York Times
Posted by John H Armwood II at 11:28 AM