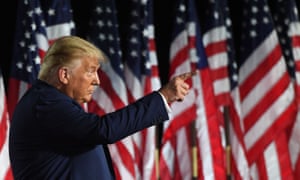 "You write him off at your peril. Donald Trump stood at one of America’s most hallowed spaces on Thursday – the White House – and bent it to his will, just as he has bent the Republican party and swaths of America.

The US president gripped a lectern with the presidential seal on a red carpeted platform. Behind him was a row of American national flags and the magnificent south portico of the White House, traditionally a neutral space for governing, not political rallies. At each side were beaming members of the Trump dynasty and two giant Orwellian TV screens.

Before him, enveloped in gloom as the clock struck 11pm on a balmy summer night in Washington, were 1,500 people obediently standing, clapping, whooping, booing his foes and chanting “Four more years!” Like past charismatic leaders who paid lipservice to democracy, Trump understands political theatre, plays crowds like a fiddle and feeds off their energy.

It was a formidable spectacle on several levels. With people crammed together and wearing “Make America great again” hats rather than face masks, this was performance art that sent the message that the coronavirus pandemic is over, even though more people have died from it during this week’s Republican national convention than in the terror attacks of 11 September 2001.

The mood of exuberance and self-confidence also implied that, whatever the death toll, whatever the huge unemployment figures, whatever the polls say, the 2020 presidential election is far from over. Trump’s grand setting in the nation’s capital, culminating in fireworks at the Washington monument and opera singers, contrasted with opponent Joe Biden’s speech last week to a silent, largely empty auditorium in Wilmington, Delaware.

And whereas the raucous crowds at a convention hall in Cleveland four years ago, with their chants of “Lock her up!”, hinted at humanity’s darkest authoritarian impulses returning to the surface, this more polite and genteel version unfolding at the seat of American power was no less ominous.

Supporters of Donald Trump packed the South Lawn of the White House for his acceptance speech at the RNC. Photograph: Kevin Lamarque/Reuters

Supporters of Donald Trump packed the South Lawn of the White House for his acceptance speech at the RNC. Photograph: Kevin Lamarque/Reuters

It was also a concrete demonstration that this time Trump has the levers of executive power at his disposal and will not hesitate to use full weight of the US government to retain power. And the crowd clearly have no intention of stopping him. Their complicity was juxtaposed with the noise of protesters and emergency sirens in nearby Lafayette Square.

“This November we must turn the page forever on this failed political class; the fact is I’m here,” said Trump, turning and gesturing to the executive mansion as supporters hollered and whistled. “What’s the name of that building? But I’ll say it differently. The fact is we’re here and they’re not.”

People rose to their feet and cheered this classic Trump notion that he is somehow at heart a blue collar billionaire, a champion of the forgotten people who led them into battle against the Washington elites.

This was the final night of a surprisingly diverse convention that has sought to animate Trump’s base, sanitise and soften his image among suburban voters and people of colour, and demonise his opponent Joe Biden as an avatar of radical socialism.

The grand finale came on the White House South Lawn, first with Trump’s daughter and senior adviser Ivanka extolling the administration’s achievements from a lectern that said “President of the United States” – some believe she will run for the title herself some day.

As his familiar rally soundtrack “God Bless the USA” played, Trump emerged with his wife, Melania, in bright green, agreeing to hold his hand this time but struggling to maintain a smile, especially after acknowledging Ivanka.

Ivanka Trump speaks from the South Lawn of the White House at the Republican national convention on Thursday. Photograph: Alex Brandon/AP

Ivanka Trump speaks from the South Lawn of the White House at the Republican national convention on Thursday. Photograph: Alex Brandon/AP

Yet while Biden rose to the occasion last week, Trump proceeded to deliver a somewhat flat 70-minute diatribe full of lies and falsehoods, red meat for the base and little to persuade the wavering voter. He even fluffed his big line by saying “profoundly” instead of “proudly”: “My fellow Americans, tonight with a heart full of gratitude and boundless optimism, I profoundly accept this nomination for President of the United States.”

Trump knows that if the election is a referendum on him, and his handling of the pandemic, he is likely to lose. But if he can turn the spotlight to Biden, he may yet raise doubts that keeps voters at home. He unleashed a cascade of bilious and often baseless attacks that portrayed the former vice-president, like Clinton before him, as a creature of the Washington swamp.

“For 47 years, Joe Biden took the donations of blue collar workers, gave them hugs and even kisses” – laughter from the audience – “and told them he felt their pain – and then he flew back to Washington and voted to ship their jobs to China and many other distant lands. Joe Biden spent his entire career outsourcing the dreams of American workers, offshoring their jobs, opening their borders, and sending their sons and daughters to fight in endless foreign wars.”

Later, another framing: “We have spent the last four years reversing the damage Joe Biden inflicted over the last 47 years. Biden’s record is a shameful roll call of the most catastrophic betrayals and blunders in our lifetime … China would own our country if Joe Biden got elected. Unlike Biden, I will hold them fully accountable for the tragedy they caused.”

And then yet another: “Biden is a Trojan horse for socialism. If Joe Biden doesn’t have the strength to stand up to wild-eyed Marxists like Bernie Sanders and his fellow radicals... then how is he ever going to stand up for you? He’s not.”

The rest was afterthought. He pushed familiar buttons: the election is about saving the American dream rather than allowing a socialist agenda to demolish our cherished destiny. He beat the drum of law and order and had little to say about racial injustice. He argued that Republicans believe in feelgood American greatness, Democrats in endless self-flagellation.

“How can the Democrat party ask to lead our country when it spends so much time tearing down our country? In the left’s backward view, they do not see America as the most free, just, and exceptional nation on earth. Instead, they see a wicked nation that must be punished for its sins.”

Trump has struggled to define what his second term would look like other than more of the same. On Friday he threw out a few details: ending reliance on China, reducing taxes and regulations, creating 10m jobs in 10 months, hiring more police and increasing penalties for assaults on law enforcement and banning sanctuary cities.

But Trump will hope the substance matters far less than the spectacle of the White House, otherwise known as the people’s house, having been fully colonised by the Make America Great Again movement. And that the image of hundreds of people without face masks lingers longer than the cold statistic of 180,000 dead. It would be his greatest act of make believe yet."

Trump unleashes diatribe of falsehoods and baseless attacks in RNC finale | US news | The Guardian
Posted by John H Armwood II at 7:24 AM