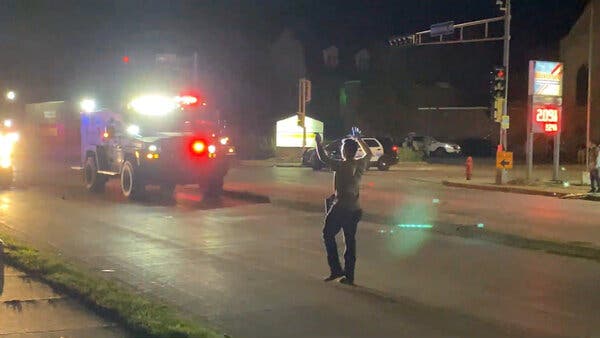 "The savagery of large swaths of America on full display as White police ignores a White triple murder at a Black protest over another police murder.  This is America, the country I hate.  The country that kidnapped my ancestors and abused me most of my life.   The American empire is collapsing under the weight of White America's chosen President as the world looks on in pity.

"Footage appears to show a teenager shooting three people during protests in Wisconsin. We tracked his movements that night.

A teenager who walked among protesters in Kenosha, Wis., carrying a military-style semi-automatic rifle was arrested and faces a charge of first-degree intentional homicide in connection with shootings that left two people dead on Tuesday night.

Kyle Rittenhouse, a 17-year-old Illinois resident, appeared on multiple videos taken throughout the night by protesters and bystanders who chronicled the events as peaceful protests gave way to chaos, with demonstrators, armed civilians and others facing off against one another and the police in the darkened streets.

The New York Times’s Visual Investigations unit analyzed hours of footage to track Mr. Rittenhouse’s movements in the moments leading up to, and during, the shootings.

Who is Kyle Rittenhouse?

Mr. Rittenhouse was arrested early Wednesday in his hometown, Antioch, Ill., which is about 30 minutes southwest of the protests in Kenosha, just over the state line.

Multiple posts on his social media accounts proclaim support for pro-police causes like the Blue Lives Matter movement and Humanize the Badge, a nonprofit that he ran a Facebook fund-raiser for on his 16th birthday.

But many details about both his background and his motivations for walking around the Kenosha protests carrying a military-style semi-automatic rifle are still emerging.

About two hours before the first shooting, the producer of a video livestream interviews Mr. Rittenhouse at a Kenosha vehicle dealership.

Mr. Rittenhouse is there at the same time as several other armed men. Some of them are positioned on the building’s roof overlooking the parking lot where vehicles were burned the day before.

In a brief exchange on the livestream, he identifies himself as “Kyle.”

In another interview, Mr. Rittenhouse speaks with Richie McGinniss, a video editor at The Daily Caller, a conservative news and opinion site.

Mr. Rittenhouse says that he’s there to protect the business. He calls it “his job,” although there is no indication that he was asked to guard the site.

Later, he claims to another videographer that he was pepper sprayed by someone in a nearby crowd while protecting property.

In most of the footage The Times has reviewed from before the shootings, Mr. Rittenhouse is around this area. He also offers medical assistance to protesters.

About 15 minutes before the first shooting, police officers drive past Mr. Rittenhouse, and the other armed civilians who claim to be protecting the dealership, and offer water out of appreciation.

Mr. Rittenhouse walks up to a police vehicle carrying his rifle and talks with the officers.

He eventually leaves the dealership and is barred by the police from returning. Six minutes later footage shows Mr. Rittenhouse being chased by an unknown group of people into the parking lot of another dealership several blocks away.

While Mr. Rittenhouse is being pursued by the group, an unknown gunman fires into the air, though it’s unclear why. The weapon’s muzzle flash appears in footage filmed at the scene.

Mr. Rittenhouse turns toward the sound of gunfire as another pursuer lunges toward him from the same direction. Mr. Rittenhouse then fires four times, and appears to shoot the man in the head.

By The New York Times. Image: Drew Hernandez, via Twitter

Mr. Rittenhouse seems to make a phone call and then flees the scene. Several people chase him, some shouting, “That’s the shooter!”

Mr. Rittenhouse’s gunfire is mixed in with the sound of at least 16 other gunshots that ring out during this time.

By The New York Times. Image: Brendan Gutenschwager, via Storyful

As this happens, police vehicles just one block away remain stationary during the gunfire.

Mr. Rittenhouse walks with his hands up toward the police vehicles. Bystanders call out to the officers that he had just shot people.

The police drive by him without stopping, on their way to assist the victims.

After the shootings, local officials announced a 7 p.m. curfew would continue until Sunday. And Wisconsin’s governor, Tony Evers, said he was sending hundreds more members of the state’s National Guard to Kenosha.

Tracking the Suspect in the Fatal Kenosha Shootings - The New York Times
Posted by John H Armwood II at 8:06 AM