No Bushes, Reagans, Cheneys or McCains: Who Is Missing at Trump’s R.N.C. - The New York Times 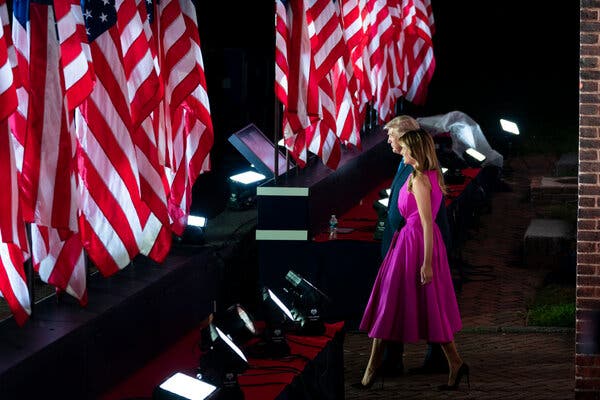 I have followed every American presidential convention since 1964 and I have never seen an event where the previous presidents of the presidential candidate's party were not there.

"The old guard that led the Republican Party from 1980 until 2016 has been conspicuously absent from this year’s convention, representing the final signature on the party’s bitter divorce.

The Republican National Convention has been a four-day procession of police officers, soldiers, religious leaders, mothers, White House aides, Trump family members and up-and-coming party stars, all singing the praises of President Trump. But one group seems to have been left out of the show: the once-dominant Republican establishment that ruled before Mr. Trump.

The appearances on Thursday evening of some current Republican leaders — in particular, Mitch McConnell, the Senate majority leader, and Kevin McCarthy, the House minority leader — served as a reminder of who had largely not been given a spot on the stage.

There were no Bushes, Cheneys, Bakers or Doles. There were no former Republican presidents or vice presidents, or prominent former cabinet members like Condoleezza Rice, who were part of Republican White Houses over the decades leading to Mr. Trump’s election. Indeed, two names were barely mentioned over roughly 10 hours of convention speeches and video: Bush and Reagan. (And never mind anyone named McCain.)

Their absence seems to be the final signature on the divorce between the old guard and Mr. Trump, as well as proof, if it were still needed, of how much he has taken over the party. And the feeling is mutual. The old guard — the elected officials, cabinet members and political operatives — has shown little interest in being part of the Trump pageant, and Mr. Trump has had little interest in having it join his show.

Matthew Dowd, a senior strategist for George W. Bush, said the animosity went both ways. “Nearly every one of the folks who have spoken at the G.O.P. convention would not have been invited to speak at the convention in 2004, including Donald Trump,” he said.

Mr. Trump’s aides said convention organizers had quite deliberately not sought to promote Republican establishment figures. “The convention was focused on hearing from real people in the real world who have benefited from President Trump’s policies,” said Tim Murtaugh, the communications director for the campaign.

Instead of having a spot on the podium or being involved in the planning of the convention and the campaign, these old-line Republican names are following the event from a distance, if they are paying much attention to it at all. Many of the old-guard Republicans, particularly those close to the Bushes and former Senator John McCain, are actively opposing Mr. Trump, and some have endorsed his Democratic opponent, Joseph R. Biden Jr.

Linda L. Fowler, a professor of government at Dartmouth College, said a major function of a convention was to “reinforce the party’s brand by showcasing its previous leaders and celebrating its roots.”

“Given the fact that the convention transacted no business, produced no platform and did nothing to promote the fortunes of down-ballot candidates, it is hard to see why it took place at all,” she said. “It was simply a television show.”

There is always some natural tension during a change in power, even among members of the same party. Departing presidents, especially unpopular ones, sometimes steer clear of conventions involving their potential successors. In 2008, George W. Bush stayed away when Mr. McCain was nominated to run against Senator Barack Obama.

Sig Rogich, a key adviser to Mr. Reagan and to the elder George Bush, said Mr. Bush had come in with his own team after winning the White House in 1988. “But they were still very aligned and collegial,” he said of the two Republican camps.

That is not the case here. Mr. Trump has made his disdain for the Bush dynasty clear; he was not invited to speak at the funeral of the elder Mr. Bush, and he took delight in knocking Jeb Bush, the former governor of Florida, after defeating him for the presidential nomination in 2016. He has also largely refrained from joining the reverence the party expresses for Mr. Reagan.

“Trump is allergic to establishment Republicans, and it’s no surprise that they’ve been airbrushed out of the convention,” said Mark McKinnon, who served as chief media adviser to George W. Bush. “Trump has refashioned the party completely in his image, and I don’t think he likes to be reminded that anything came before him.”

Joe Gaylord, a senior adviser to Newt Gingrich, the former House speaker, said the party under Mr. Trump had returned to its historical roots before World War II — protectionist and isolationist — creating a gulf with the establishment that ran the party from 1980 until 2016. Mr. Gaylord said that process had been accelerated as Mr. Trump’s influence took over the leadership of state and county parties across the nation.

“Parties always take on the image of their president, and the parties have evolved a great deal,” Mr. Gaylord said. “Trump has moved from the evolution of parties to the revolution of our party. It’s pretty clear he was not part of the old guard at all, and they don’t have much to do with him.”

Mr. Dowd argued that Mr. Trump had not changed the Republican Party and that he was part of an ideological procession that began with Sarah Palin as Mr. McCain’s running mate in 2008.

“Trump isn’t a cause of where the G.O.P. is today,” Mr. Dowd said. “He is an effect. Keep in mind that Palin, who was a version of Trump before him, drew much larger G.O.P. crowds than McCain in 2008.”

Republicans who might normally have been in the hallways — if there were hallways — of the 2020 party convention have kept clear this time. Mark Salter, who was a senior adviser to Mr. McCain, said Thursday that he was in Maine and had no interest in having anything to do with the convention. He said he was not surprised at how few familiar Republican faces were on hand.

“I’d like to think it’s because what Trump has done to the Republican Party is to make it unrecognizable from the one we worked for,” he said. “Having people from past, competent Republican administrations would be an embarrassing contrast to the Z team that is running the White House now.”

“Trump is not a Republican,” Mr. Salter said. “He’s not a conservative. He’s a self-obsessed guy with no self-control. What does he want with a party? I don’t think they’d want him, and I’d like to think that most respectable Republicans who are in the business for more than a paycheck wouldn’t want to endorse what’s going on down there.”

No Bushes, Reagans, Cheneys or McCains: Who Is Missing at Trump’s R.N.C. - The New York Times
Posted by John H Armwood II at 7:16 AM