Opinion | The Only Way to Remove Trump - The New York Times 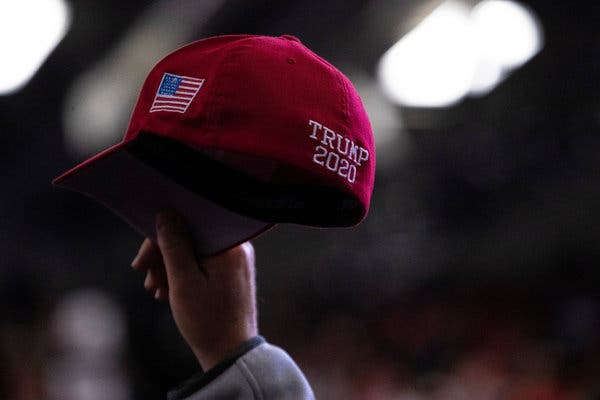 "The Only Way to Remove Trump

To eject the president, you need to beat him.

A supporter of President Trump at a Keep America Great rally in Wildwood, N.J., on Tuesday.Calla Kessler/The New York Times

Donald Trump is not a Caesar; he does not bestride our narrow world like a colossus, undefeatable save by desperate or underhanded means. He is an instinct-driven chancer who has exploited the decadence of his party and the larger system to grasp and hold a certain kind of power.

But he is also a reckless and distracted figure, a serial squanderer of opportunities, who barely won the presidency and whose coalition is united only in partisan solidarity and fear of liberalism. He may not be removable by the impeachment process, but is not a king; he is a widely hated, legislatively constrained president facing a difficult re-election.

For a long time during Trump’s ascent I wrote columns demanding that the leaders of the Republican Party do something to keep this obviously unfit, chaotic, cruel man from becoming their nominee for president. Those columns were morally correct but structurally naïve, based on theories of party decision-making that no longer obtain in our era of institutional decay.

But Trump could have been stopped in the Republican primaries the old-fashioned way — by being beaten at the polls. His base was limited, his popularity fluctuated, and if his rivals had recognized the threat earlier, campaigned against him consistently, strategized with one another more effectively, and avoided their own meltdowns and missteps, there was no reason he could not have been defeated.

After Trump’s administration began and immediately descended into chaos, I had one last flare of institutionalism, one last moment of outrage and 25th Amendment fantasy. But since then I have left the outrage to my liberal friends, watching them put their hopes in Robert Mueller’s investigation, in law-enforcement and intelligence-agency leaks and whistle-blowing, and finally — though with less real hope, and more grim resignation — in the House’s articles of impeachment.

Now that last effort is ending, as everyone with eyes could see it would, with the Republicans who failed to beat Trump when it counted declining to turn on him now that partisan consolidation and improving national conditions have sealed their base to him. The mix of expedience and cravenness with which the institutional G.O.P. approached impeachment is no different than the way the institutional G.O.P. behaved during Trump’s initial ascent, and it leaves Trump’s opposition no worse off than before. A failed impeachment doesn’t give him new powers or new popularity; it just shows that the normal way to be rid of an unpopular president is the way that Democrats must take.

Of course, in trying to beat him they have to cope with the fact that he is chronically unscrupulous, as the Biden-Ukraine foray shows. And they have to overcome the advantage that his particular coalition enjoys in the Electoral College.

But in other ways the Democrats are lucky to have Trump to run against, as they were lucky in 2016. In a year when the fundamentals mildly favored Republicans, Hillary Clinton got to face off against the most-disliked G.O.P. nominee of modern times. And she would have beaten him — even with Russia, even with Comey — had her campaign taken just a few more steps to counter his team’s long-shot strategy to flip the Midwest.

As with 2016, so with politics since. Liberal hand-wringing about their structural disadvantages ignores the advantages that Trump keeps giving them — the fact that in the best economy in 20 years he can’t stop making people hate him, can’t stop missing opportunities to expand his base, can’t stop forcing vulnerable Republicans to kiss his ring and thereby weaken their own prospects.

It’s worth remembering, too, that liberalism is not just struggling in America, with our Electoral College and right-tilting Senate; it is struggling all around the world. Which, again, suggests that American liberals are fortunate to have Trump as their Great Foe. If he were merely as disciplined and competent as Boris Johnson or Viktor Orban, to choose leaders with whom he has a few things in common, he would be coasting to re-election.

You have to beat him."

Opinion | The Only Way to Remove Trump - The New York Times
Posted by John H Armwood II at 2:32 PM