How Can Warren Win? By Attacking Bloomberg. | The Nation 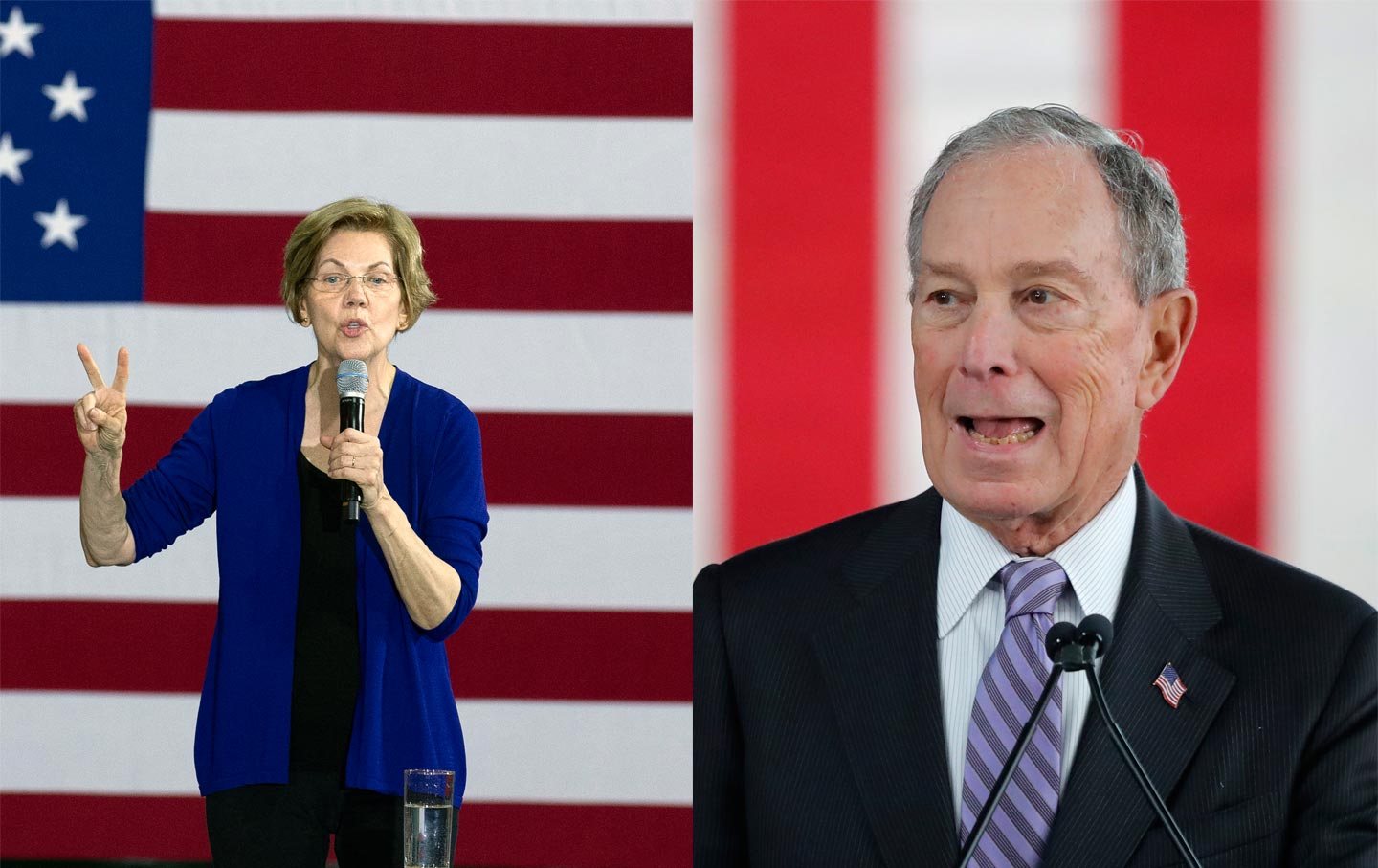 One of the dirty secrets of journalism is that we hardly ever write an obituary after someone dies. Since everyone is mortal, death notices—at least for the newsworthy—are composed well ahead of time. A similar spirit of vulture-like anticipation governs political coverage, where the downward spiral of a political campaign is the perfect opportunity for hand-wringing articles on how it all went wrong. Since her disappointing fourth-place finish in the New Hampshire primary, Elizabeth Warren has had the dubious pleasure of reading eulogies for her presidential hopes.

These obituaries are premature. It’s too early to write Warren off—although not too early for her campaign to do some stocktaking and revise its battle plan. In the past, Warren’s shown remarkable resilience in recovering from missteps. Her presidential campaign itself began with an epic blunder, the use of a DNA test to answer objections to her claim of Native American ancestry. But she was able to rebound from that mistake and regain her status as a leading candidate.

Republicans Have Made It Clear They Will Let Trump Become a Dictator. Will We?

Pundits have suggested many reasons why Warren faltered in New Hampshire, even though she’s demonstrated her genuine appeal through large rallies and robust fundraising from small donors. Sexism is one major factor. She’s also been hammered on the issue of Medicare for All, where she’s being squeezed from both ends of the spectrum, being too cautious for Bernie Sanders and too radical for Pete Buttigieg.

But a crucial problem with her campaign has gone under-discussed: Her pitch as being a unity candidate has undermined her ability to present herself as a fighter and to draw crucial distinctions with other candidates. At critical junctures, it’s prevented her from battling on her own behalf when she’s been wronged.

It’s understandable why Warren has latched onto the unity message. The Democratic Party is polarized between Sanders’s left-wing movement and the moderate forces of the other major candidates, notably Joe Biden, Amy Klobuchar, and Buttigieg. It is undeniably true that uniting the left and the moderates will be necessary if Democrats are to win the general election. Warren was ideally suited to present herself as the peacemaker who could bring the two factions together, since she shares many of Sanders’s policy commitments but is regarded as less of a firebrand.

“I’m not here to attack other Democrats,” Warren repeatedly said throughout 2019. By and large she’s held to that rule—apart from a fight with Sanders over a comment she alleges he made about America’s not being ready for a woman president.

On Tuesday night while addressing supporters, Warren reaffirmed her unity message. “The fight between factions in our party has taken a sharp turn in recent weeks with ads mocking other candidates and with supporters of some candidates shouting curses at other Democratic candidates,” she lamented. “These harsh tactics might work if you are willing to burn down the rest of the party in order to be the last man standing.”

But the unity message hasn’t served Warren well. It’s not wrong in theory, but it was used too early. Primaries have a structure: First the candidates battle it out, and then when a winner is selected the party comes together behind him or her. Warren’s unity message was an attempt to reverse the process, to claim a leadership position that hadn’t been earned in combat.

Voters often say they don’t like to see members of their own party quarreling. Yet the hope for a peaceful primary is more aspirational than real. After all, voters also want politicians who will fight for them, now more than ever since the foe in November will be Donald Trump.

By presenting herself as the party peacemaker, Warren undercut any chance of showing off her genuine skills as a rhetorical pugilist. Klobuchar, by contrast, did herself much good by taking swipes at Buttigieg for his inexperience in the debate that preceded New Hampshire. Voters clearly liked Klobuchar’s combativeness and rewarded her with a surge that took her to a close third.

As Helaine Olen pointed out in The Washington Post, the unity theme also clashed with Warren’s earlier political identity as the scourge of corruption in both political parties. Olen argues that “because Warren’s signature issue is corruption and how it impacts both political parties, when she suddenly pivoted and campaigned as a ‘unity’ candidate who could work with the establishment, it came across as both intellectually incoherent and a little bit, well, desperate.”

The Iowa fiasco shows how the unity message weakened Warren. Prior to the caucus, the Buttigieg campaign successfully got The Des Moines Register to spike an influential poll by citing a minor glitch. We now know the poll showed Sanders at 22 percent, Warren at 18 percent, and Buttigieg at 16 percent. If the poll had been published, it would have given a last-minute boost to Warren.

The final Iowa results are preliminary, since there is a partial recanvass still going on. But on the basis of those results, Warren actually came in a strong third. The current tally in the popular vote is: Sanders at 26.5 percent, Buttigieg at 25.1 percent, and Warren at 20.2 percent.

Imagine if Warren had responded to the Iowa mess by accusing the Buttigieg campaign of underhanded tactics—and also attacked the party for the faulty tabulation. With the publicity from the attack, she could also have highlighted her strong performance in the popular vote. That’s what the Sanders campaign did. Warren was not able to do the same, because she’s trying too hard to be the voice of unity.

It’s not too late for Warren to ditch the unity message, at least temporarily. The increasing prominence of Michael Bloomberg is the perfect opportunity. If Warren’s core message is that American democracy has been corrupted by big money, she couldn’t ask for a better foil than Bloomberg. Whatever his merits as an advocate for gun control or dealing with climate change, Bloomberg is a perfect example of our age of plutocracy. He is completely unashamed about using his wealth to buy political office, having already spent well over $300 million of his own vast fortune on his presidential bid.

Warren quickly tweeted out both a video and a statement condemning Bloomberg. “I’m surprised that someone running for the Democratic nomination thinks the economy would be better off if we just let banks be more overtly racist,” she wrote. “We need to confront the shameful legacy of discrimination, not lie about it like Mike Bloomberg has done.”

This is a Warren we haven’t seen much of in the primaries, a Warren who throws off the handcuffs of unity and goes after her rivals in the strongest possible terms.

Warren will have a difficult road ahead, especially in raising enough money to be competitive on Super Tuesday. But with her attack on Bloomberg, she’s shown how she can remain viable. Instead of talking about unity, she can emphasize her own vision as an alternative to the oligarchical nightmare promised by Bloomberg. There will be time for unity later. Warren’s mission for now is to stay alive and win."

How Can Warren Win? By Attacking Bloomberg. | The Nation
Posted by John H Armwood II at 10:22 PM