Michael Bloomberg is trying to buy the presidency – that should set off alarms | Robert Reich | Opinion | The Guardian. Mr. Stop and Frisk, the Mayor who ordered the NYPD to defy the US Constitution by profiling Blacks and Hispanics by race. Bloomberg is Trump lite. 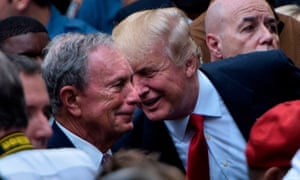 Mr. Stop and Frisk, the Mayor who ordered the NYPD to defy the US Constitution by profiling Blacks and Hispanics by race.  Bloomberg is Trump lite.

"We haven’t seen his name on any of the ballots in the first four states, but that’s about to change. I’m talking, of course, about multibillionaire presidential hopeful Michael Bloomberg.

Bloomberg has a chance of winning the presidency because his net worth is more than $60bn.

The yearly return on $60bn is at least $2bn – which is what Bloomberg says he’ll pour into buying the highest office in the land. It’s hardly a sacrifice for him, but it’s a huge sacrifice for American democracy.

Encouraged by the murky outcome from the Iowa caucuses and the notable lack of enthusiasm for Joe Biden, Bloomberg has decided to double his spending on TV commercials in every market where he is currently advertising, and expand his campaign field staff to more than 2,000.

He’s not competing in the first four states with caucuses and primaries but focusing instead on 3 March. So-called “Super Tuesday” will be more super than ever because it now includes California, Texas, Virginia, Minnesota, North Carolina and Massachusetts – a third of all delegates to the Democratic convention.

“It’s much more efficient to go to the big states, to go to the swing states,” Bloomberg told the New York Times. “The others chose to compete in the first four. And nobody makes them do it, they wanted to do it. I think part of it is because the conventional wisdom is, ‘Oh you can’t possibly win without them.’”

Later, he added: “Those are old rules.”

Yes, and the new rules are also to spend billions of your own money, if you have it.

In January alone Bloomberg spent more than $300m on advertising for his campaign. That’s more than Hillary Clinton spent on advertising during her entire presidential run in 2016. It’s multiples of what all other Democratic candidates have spent, leaving even Tom Steyer, another billionaire, in the dust.

The heart of Bloomberg’s campaign message is that he has enough money to blow Trump out of the water. As if to demonstrate this, Bloomberg bought a $10m Super Bowl ad that slammed Trump in the middle of the big game, then bashed Trump again in a national ad just hours before the State of the Union address.

“The Real State of the Union? A nation divided by an angry, out of control president,” a narrator says. “A White House besotted by lies, chaos and corruption.”

If Trump’s tweets are any barometer, Bloomberg’s tactics are getting under the thin-skinned president’s fragile epidermis. According to one Trump adviser, the president “thinks that money goes a long way” and those who believe Bloomberg has no hope are “underestimating him”. Another says Trump “takes money seriously. He’s a businessman.”

The Democratic National Committee is ready to boost Bloomberg into the top tier. Last Friday it abandoned one of its criteria for getting on to the coveted debate stage – the individual-donor threshold, which was used for the first eight debates including this week’s event in New Hampshire – presumably because Bloomberg doesn’t take donations.

To participate in the 19 February debate in Las Vegas, candidates will need to show at least 10% support in four polls released from 15 January to 18 February. Three candidates have met that threshold: Joe Biden, Bernie Sanders and Elizabeth Warren. Bloomberg’s wall-to-wall advertising is giving him a good shot.

Last Monday he tied with Warren for third place in a Morning Consult tracking poll. He’s in the top four in many Super Tuesday states. In Texas and North Carolina, he has overtaken Buttigieg for fourth. He has the third-highest polling average in Florida, ahead of Warren, and fourth-highest in Michigan, Ohio, Georgia, Pennsylvania and New Jersey, whose primaries all fall after Super Tuesday. In the past week, polls have Bloomberg tied for second in New York and trailing only Biden in Missouri. He was also fourth in a Suffolk University poll of Utah, at 13%.

Amazing what money will buy, if there’s enough of it.

Bloomberg has some attractive public policy ideas: he’s for gun control, he wants to reverse climate change and he’s unveiled a plan to raise an estimated $5tn of new tax revenue from high earners and corporations, including a repeal of Trump’s 2017 tax cuts and a new 5% “surcharge” on incomes above $5m a year.

But he’s also a champion of Wall Street. He fought against the milquetoast reforms following the near-meltdown of 2008. His personal fortune is every bit as opaque as Trump’s. Through his dozen years as mayor of New York he refused to disclose his federal taxes. Even as a candidate for president, he still hasn’t given a date for their release. And, let’s not forget, he’s trying to buy the presidency.

America has had some talented and capable presidents who were enormously wealthy – Franklin D Roosevelt, Teddy Roosevelt, John F Kennedy, for example. The problem lies at the nexus of wealth and power, where those with great wealth use it to gain great power. This is how oligarchy destroys democracy.

The word “oligarchy” comes from the Greek word oligarkhes, meaning “few to rule or command”. It refers to a government of and by a few exceedingly rich people or families who control the major institutions of society. Oligarchs may try to hide their power behind those institutions, or excuse their power through philanthropy and “corporate social responsibility”. But no one should be fooled. An oligarchy is not a democracy.

Even a system that calls itself a democracy can become an oligarchy if power becomes concentrated in the hands of a corporate and financial elite. Their power and wealth increase over time as they make laws that favor themselves, manipulate financial markets to their advantage, and create or exploit economic monopolies that put even more wealth into their pockets.

Since 1980, the share of America’s wealth owned by the richest 400 Americans has quadrupled while the share owned by the entire bottom half of America has declined. The richest 130,000 families in America now own nearly as much as the bottom 90% – 117 million families – combined. The three richest Americans own as much as the entire bottom half of the population. According to Forbes, Michael Bloomberg is the eighth richest.

All this has been accompanied by a dramatic increase in the political power of the super-wealthy and an equally dramatic decline in the political influence of everyone else. Unlike income or wealth, power is a zero-sum game. The more of it at the top, the less of it anywhere else.

Make no mistake: the frustrations and insecurities that fueled Trump’s rise – and are still the basis of his support – have their origin in this power shift, which has left most Americans with a small slice of the nation’s prosperity and almost no voice in its politics.

A half-century ago, when America had a large and growing middle class, those on the left wanted stronger social safety nets and more public investment in schools, roads and research. Those on the right sought greater reliance on the free market.

But as power and wealth have moved to the top, everyone else – whether on the old right or the old left – has become disempowered and less secure. Today the great divide is not between left and right. It’s between democracy and oligarchy.

Bloomberg is indubitably part of that oligarchy. That should not automatically disqualify him but it should set off alarms. If the only way we can get rid of the sociopathic tyrant named Trump is with an oligarch named Bloomberg, we will have to choose the oligarch. Yet I hope it doesn’t come to that. Oligarchy is better than tyranny. But neither is as good as democracy.

Robert Reich, a former US secretary of labor, is professor of public policy at the University of California at Berkeley and the author of Saving Capitalism: For the Many, Not the Few and The Common Good. His next book, The System: Who Rigged It, How We Fix It, will be out in March. He is a columnist for Guardian US."

Michael Bloomberg is trying to buy the presidency – that should set off alarms | Robert Reich | Opinion | The Guardian
Posted by John H Armwood II at 11:27 AM