Opinion | The Audacity of Hate - The New York Times 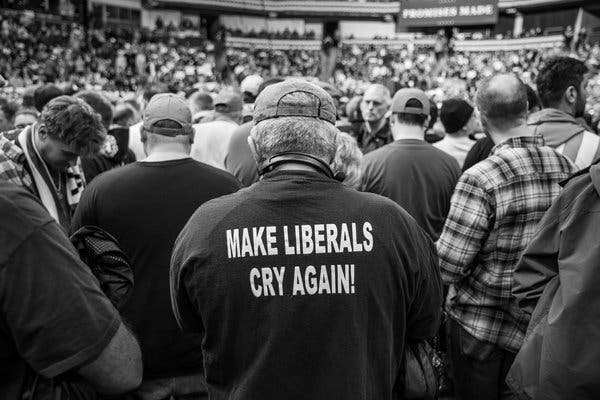 "Trump has a knack for turning anger and fear into political power. And for turning the volume up to 11.

Karl Rove had a novel idea for how to organize President George W. Bush’s 2004 re-election campaign.

He and the chief campaign strategist, Matthew Dowd, decided on a “base strategy.” They reallocated the bulk of the campaign’s media budget to focus on social conservatives instead of on moderates — a decision predicated on the fact that the swing, or persuadable, share of the electorate had shrunk from one in five voters to less than one in 10. The most effective use of campaign funds, the thinking ran, was to invest in turning out more of the millions of white right-wing voters who needed to be motivated to show up at the polls.

The result was a shift that year from a traditional centrist strategy to an emphasis on anger and fear, a shift that turned out to have profound long-term consequences.

Campaigns in the past had relied on activating resentment and hostility, of course, but the re-election drive for Bush in 2004 was the first to make this the centerpiece of a mainstream presidential effort.

American politics were irrevocably transformed, polarization strategies became institutionalized and the stage was set for the explicit racial and anti-immigrant themes dominating Donald Trump’s campaigns for election and re-election.

The economic meltdown of 2007-9 devastated faith in the American economic system and in the nation’s elected leaders — especially the Republican establishment.

In the midst of stock market losses of $2 trillion — a 40 percent plunge in the value of the Dow Jones — the country was hit by a catastrophic mortgage crisis, with nearly 10 million Americans losing their homes to foreclosure sales, according to Marketplace.org:

The effects of the subprime mortgage crisis are not only still being felt today, they have indelibly changed the way Americans view homeownership and the way we live.

In 2008, the country, reeling from economic chaos, elected Barack Obama — the brainy president of the Harvard Law Review and a professor of constitutional law at the University of Chicago — as America’s first black president.

A second response to intensifying fears, however, was the emergence of the Tea Party, which mobilized racially and financially apprehensive whites who felt abandoned by the Republican leadership.

Hostility to Wall Street, costly bailouts of banks, brokerages and the auto industry, played a role. But as the financial crisis played out, immigration and struggles over school integration compounded this unease.

Theda Skocpol, a professor of government and sociology at Harvard and a co-author of “The Tea Party and the Remaking of Republican Conservatism,” told Mother Jones:

This was definitely a movement of people who are anxious about racial changes in the country, anxious about immigration, and were, in some cases, also Christian conservatives who felt very passionately about homosexuality and abortion and having laws against those.

Skocpol, who spent many hours talking with Tea Party members, added that veterans of the Tea Party movement “are the core of the most adamant of Trump’s supporters.”

The Tea Party changed what it was permissible to debate openly in contemporary politics. Within a few years, it enabled Trump to further erode the norms of political combat and more openly instigate partisan conflict based on racial and ethnic antagonism.

Under Trump, coded rhetoric like Reagan’s “welfare queen” and Nixon’s “silent majority,” was — and is — no longer coded.

Trump’s sudden emergence as a political player began in 2011 with his championing of the birther movement, promoting the false allegation that President Obama was born in Kenya.

In March 2011, as he contemplated a run for the presidency, Trump began to claim in television interviews that Obama

doesn’t have a birth certificate, or if he does, there’s something on that certificate that is very bad for him. Now, somebody told me — and I have no idea if this is bad for him or not, but perhaps it would be — that where it says “religion,” it might have “Muslim.” And if you’re a Muslim, you don’t change your religion, by the way.

Trump directly challenged the political calculations of Republican leaders who argued after Mitt Romney’s defeat in 2012 that the party needed to make inroads among Latino, Asian and African-American voters.

Sean Trende, an election analyst at RealClearPolitics, Vox reported, “offered a different diagnosis: Romney’s real problem was ‘missing’ white voters who didn’t show up to vote,” and Trende was proved right: As the 2016 primary battle progressed, “those voters” were “no longer missing.” Trump had found them.

Trump didn’t just find the missing white voters. He found the voters who most strongly objected to immigration, responding positively to such survey questions as:

“Immigrants today are a burden on our country because they take our jobs, housing and health care” and “It bothers me when I come into contact with immigrants who speak little or no English.”

More than any of his competitors for the nomination, Trump understood the underbelly of the white Republican electorate. Not only did he understand it, he was ready and willing to go where no other presidential candidate would venture.

More than anything, Trump intuitively understood how polarization, and with it, the intense hatred among legions of Republican voters of liberal elites and of the so-called meritocracy could be a powerful tool to win elections.

Thomas Mann, a senior fellow at Brookings and the author, with Norman Ornstein, a resident scholar at the American Enterprise Institute, of the book “It’s Even Worse Than It Looks: How the American Constitutional System Collided With the New Politics of Extremism,” was blunt in his assessment of the broad contemporary political environment.

Partisan polarization has become hard-wired in the American political system and is likely to be with us for the foreseeable future. Our constitutional system is not well matched with our current party system. Partisan asymmetry makes it even worse. The GOP has radicalized into an anti-system party that does not accept the legitimacy of its opposition and enables a slide toward autocracy. Very dangerous times for American democracy.

It is an environment in which negative campaigning, on TV and on social media, has become the instrument of choice, not a tool, but the beating heart of political partisanship.

Two political scientists, Gaurav Sood and Shanto Iyengar, describe this shift to antagonistic campaigning in “Coming to Dislike Your Opponents: The Polarizing Impact of Political Campaigns”

The rise in hostile views of the opposition candidate, the two authors argue, “is not primarily due to learning about real ideological positions of the candidates and the parties.” Instead, they write, the more likely explanation is that the effectiveness of these campaigns is in reminding “partisans about the negative traits of the out-party candidate, and positive traits of her own party.”

Sood and Iyengar see the use of divisive campaign tactics increasing in the future:

It is likely that as a consequence of the data revolution, and burgeoning social scientific research, campaigns will learn to target individuals better, and will be able to deliver more “potent” messages to them.

In this climate, penalties for intraparty dissent are quick and brutal. Take a look at what happened to Justin Amash, of Michigan, once a Republican in good standing, one of the founders of the conservative Freedom Caucus, who was sent to political purgatory (and eventually exile from the party) after he suggested that Trump had committed impeachable offenses as president.

“I don’t think we’ve seen the worst of it,” Douglas Ahler, a political scientist at Florida State University, emailed in response to my inquiry, adding:

When you take today’s urban-rural divide, couple it with the most engaged citizens’ tendency to live in echo chambers, and add accelerants in the forms of identity politics and misinformation campaigns, you have a house waiting to go up in flames.

“We identify three possible negative outcomes for democracy,” the political scientists Jennifer McCoy and Tahmina Rahman of Georgia State and Murat Somer of Koç University Istanbul, wrote in their 2018 paper, “Polarization and the Global Crisis of Democracy.”

With few exceptions, political scientists are pessimistic about both the short- and long-term prospects for amelioration of hostile partisan division. It is probably best not to take comfort in experiments that reveal that, under certain circumstances, it is possible to lessen polarization.

Ethan Porter, a professor of media and public affairs at George Washington University, for example, wrote me that his work with Thomas J. Wood, a political scientist at Ohio State, shows that

when factual misinformation is corrected, people tend, on average, to be made more accurate. People are hardly invulnerable to factual corrections; on the contrary, whether Republicans or Democrats are exposed to corrections of their partisan leaders, they generally respond by becoming more accurate.

In practice, however, the rise of newspaper fact-checking would appear to at least partially achieve the goal of correcting misinformation, even as the rise of mutual hatred between Democrats and Republicans has accelerated.

But, it is difficult, if not impossible, to conceive of circumstances under which Chuck Schumer and Mitch McConnell, or Nancy Pelosi and Donald Trump, would “non-judgmentally” exchange “narratives in interpersonal conversations.”

Nate Persily, a professor of law and political science at Stanford, wrote me that the most significant damage resulting from negative partisanship and polarization is

that the normal methods of accountability in a democratic society cease to apply. It used to be that people, regardless of party, believed government statistics about the employment rate and other metrics of progress and national well-being. Now, our interpretation of the basic facts of whether we are going in the right or wrong direction is dominated by whether expressing such an opinion is consistent with that which would advantage our tribe.

This extends to the legitimacy of elections, Persily continued, adding that

trust in the electoral process is now contingent on who wins. That is, losers will cry ‘fraud’ and consider the president illegitimate, even if the election is well-run. This is the kind of dynamic we see in the developing world and unstable democracies. It is a recipe for disaster.

Alex Theodoridis, a political scientist at the University of California-Merced, argued that instead of being an aberration, polarization may now be the norm, the default political environment:

Many look back fondly on the middle part of the last century when political party, ideology, and a host of social categories were not strongly aligned the way they are today and, thus, partisan polarization was far less pronounced.

it is more likely that that bygone era was the aberration and today’s hyperpolarization is what we should expect in equilibrium. In other words, we probably ought to accept the current state of affairs as the new normal. The mutual dislike and distrust between Democrats and Republicans is likely to persist without a dramatic party realignment.

In fact, nothing would make Trump happier than to have Theodoridis’s belief that polarization is the new normal or to see Persily’s warnings of lost legitimacy proven true. Trump thrives when the climate is chaotic and disruptive and he is the prime example of lost legitimacy in American politics."

Opinion | The Audacity of Hate - The New York Times
Posted by John H Armwood II at 10:38 AM