C’mon, Iowa, This Is Just Ridiculous | The Nation 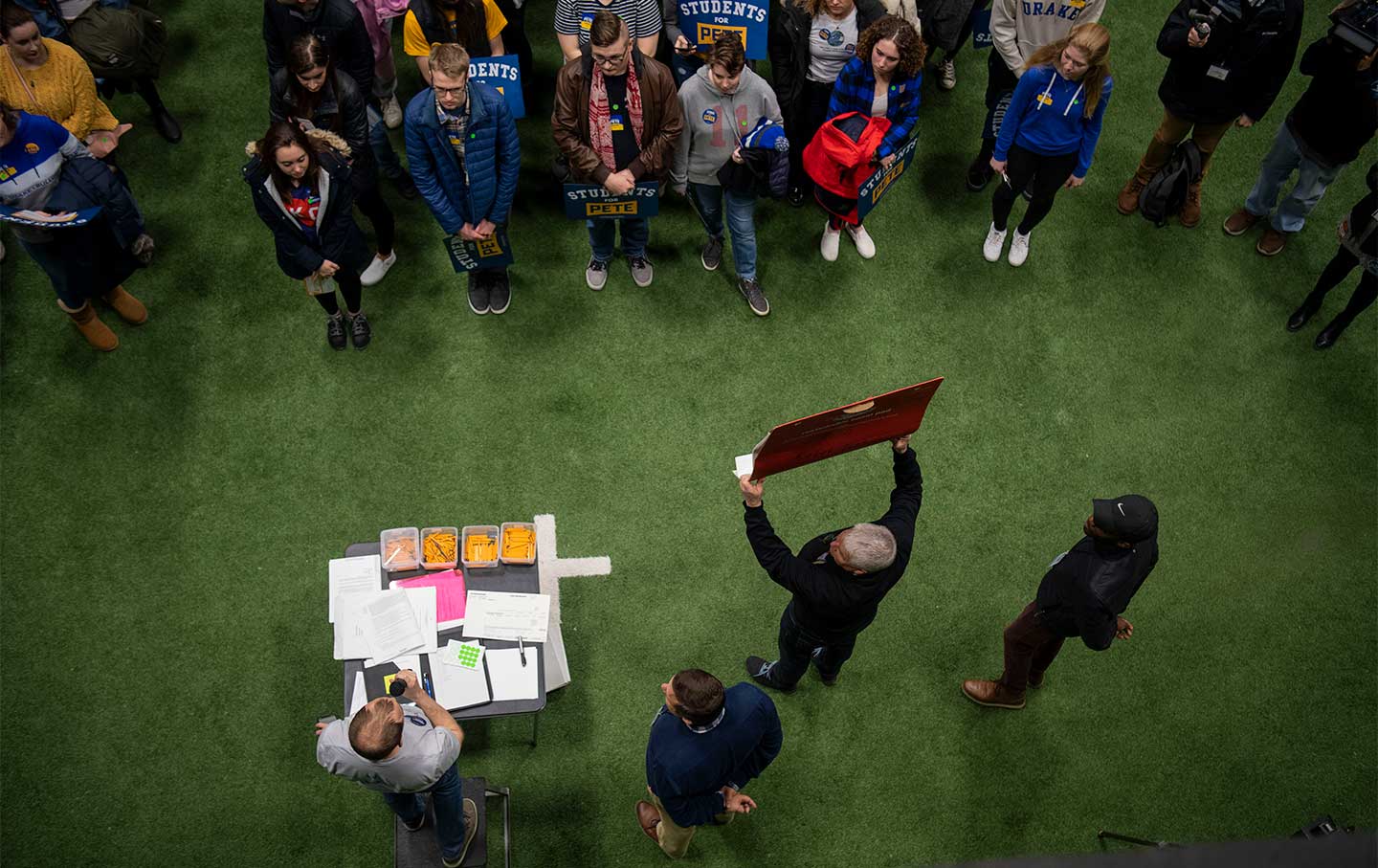 "Dubuque, Iowa—For years the Iowa Democratic Party and its apologists at the Democratic National Committee have argued that there is value in starting the nominating process in this small swing state in the Midwest.

Despite a lack of diversity and a caucus process so complex that it requires study guides, the Iowans got the concession—and with it the ability to give candidates an “Iowa bump” and the momentum that might propel them toward the nomination and the presidency.

But there was one requirement, the state party had to deliver a coherent process and timely results.

Last night, while grassroots Democrats did their part by showing up to caucus in more than 1,600 precincts across the state, aligning and realigning, counting and recounting, and at least trying to call in results, the state party screwed up. Horribly.

Results that were supposed to be tabulated and announced as the night wore on never came.

Amid reports that the app that was developed to report results had not functioned as intended, and that a backup hotline was not being answered, frustrated precinct chairs were giving cable television hosts breathless reports on a system that melted down at precisely the moment when the whole world was watching. Hours after results should have been tabulated sufficiently to at least point to a winner, the state party issued a series of statements that created more questions than they answered.

An initial announcement noted that there were “quality control” problems.

Then party spokesperson Mandy McClure said, “We found inconsistencies in the reporting of three sets of results. In addition to the tech systems being used to tabulate results, we are also using photos of results and a paper trail to validate that all results match and ensure that we have confidence and accuracy in the numbers we report.”

Translation: This mess was so severe that the party was still scrambling to come up with some way to figure out who had prevailed.

“They basically told us nothing,” one senior adviser to a leading candidate said of the call between Iowa Democratic Party leaders and the campaigns.

Another Democratic campaign source, when asked by The Hill, what they were hearing about the situation, responded, “Literally nothing.”

When the campaigns pressed for answers, party officials reportedly hung up on them.

There will be results, ultimately. The caucus chairs have the numbers and the paper trail can be followed.

But confidence in the process was shaken Monday night, as conspiracy theories lit up social media.

Things got so absurd that Georgetown University law professor Rosa Brooks joked in a tweet: “Following a series of technical problems, Iowa Democratic Party officials are now advising precincts to select their preferred candidate by examining the entrails of a sheep, then mailing the sheep to party headquarters for quality control purposes.”

The campaign of former vice president Joe Biden responded most aggressively—if perhaps most cynically, in light of reports that Biden had finished poorly in much of the state. In a letter to the Iowa party, the general counsel for the Biden’s camp expressed concerns about a flawed process. “I write on behalf of the Biden for President Campaign regarding the considerable flaws in tonight’s Iowa Caucus reporting system,” wrote Dana Remus, the campaign’s general counsel. “The app that was intended to relay Caucus results to the Party failed; the Party’s back-up telephonic reporting system likewise has failed. Now, we understand that Caucus Chairs are attempting to—and, in many cases, failing report results telephonically to the Party. These acute failures are occurring statewide.”

Remus added: “We appreciate that you plan to brief the campaigns momentarily on these issues, and we plan to participate. However, we believe that the campaigns deserve full explanations and relevant information regarding the methods of quality control you are employing, and an opportunity to respond, before any official results are released. We look forward to hearing from you promptly.”

Vermont Senator Bernie Sanders, Massachusetts Senator Elizabeth Warren, and former South Bend, Indiana, mayor Pete Buttigieg all delivered enthusiastic speeches. Buttigieg went the farthest, all but claiming victory—despite indications from the Sanders camp that they had the advantage. When all was said and done Monday night, however, they were all denied the glory that comes with being declared the winner by the Associated Press and the next-morning headlines, and the “Iowa bump” momentum that might extend from them.

As such, the real winners could turn out to be former New York Mayor Mike Bloomberg, the free-spending billionaire candidate who declined to participate in the caucuses, and President Trump. Bloomberg gets to keep spending his way into the chaotic and ill-defined Democratic competition, while Trump will seize the spotlight Tuesday evening with his State of the Union address.

The real losers were the Iowa Democratic Party and the state’s claim on “first-in-the-nation” status. Speaking to The Des Moines Register, political scientist David Redlawsk—a visiting professor at the University of Iowa who has been assessing the 2020 election process—said, “Obviously this creates a challenge for Iowa’s position as first given there has been a lot of pressure—maybe even more than usual—on that.”

C’mon, Iowa, This Is Just Ridiculous | The Nation
Posted by John H Armwood II at 3:38 PM