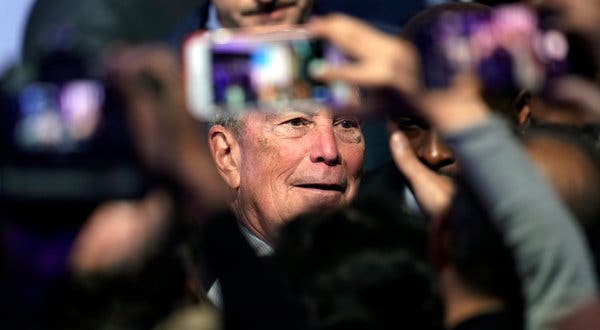 "The Trumpian Liberalism of Michael Bloomberg

He may be running as the anti-Trump, but when it comes to the politics of racial control, there is a resemblance.

Michael Bloomberg at a campaign event in Houston this month.

Michael Bloomberg at a campaign event in Houston this month.David J. Phillip/Associated Press

Donald Trump is who he is as a politician because of his unapologetically racial vision of the American nation. Trump’s America is white, and he sees his job as protecting that whiteness from black and brown people who might come to the country or claim greater status within it. That’s what it meant to “make America great again.” And he’s delivered, using the power of the office and the force of the state to attack and stigmatize black and brown people, from outspoken celebrities to ordinary immigrants.

If that’s our lens for understanding Trump — if the heart of his movement and ideology is racial control — then it appears we finally have a Democratic equivalent, a figure who works on the same signal albeit at a different frequency. It’s Michael Bloomberg, the other New York billionaire in American politics, who is currently campaigning for the Democratic presidential nomination.

There are clear objections to thinking of Bloomberg this way. He may have been a Republican, but he’s also a liberal. He has given hundreds of millions of dollars to liberal causes and Democratic politicians. He spent more than $100 million helping Democrats take control of the House of Representatives in 2018. He’s also given tens of millions of dollars to environmental groups and spent millions more lobbying for new gun control laws. He’s given to Democratic super PACs and voting rights groups, individual politicians and the Democratic National Committee itself. And while he is an imperious personality with a disdain for limits — he got the rules changed so he could serve a third term as mayor of New York — he also doesn’t share the president’s criminality, corruption and complete contempt for constitutional government.

Although he never articulated it in these terms, Bloomberg’s actions as mayor reveal that he was someone who also saw black and brown people as threats to the security and prosperity of his territory, New York. And under his administration, the city became a quasi-authoritarian state for many of its black, brown and Muslim residents.

Bloomberg, as many before me have explored in detail, expanded the New York Police Department’s use of “stop and frisk,” a tactic that empowered police officers to stop, search and interrogate residents on the sole basis of “reasonable suspicion.” Overall, between 2004 and 2012, the NYPD — which Bloomberg once called his “own army” while also weirdly claiming that it was the “seventh biggest army in the world” — stopped 4.4 million New York residents. The vast majority, more than 80 percent, were black and brown people, especially young men and boys. In 2011, according to a contemporaneous report by the New York Civil Liberties Union, police stopped more young black men than the total number living in the city. “By the time I was 15 to 18, I’d say I was stopped, questioned and frisked at least 60 to 70 times,” Tyquan Brehon, a young Brooklyn resident, said in a 2012 interview with The New York Times.

Bloomberg had no time for this criticism. “If we stopped people based on census numbers, we would stop many fewer criminals, recover many fewer weapons and allow many more violent crimes to take place,” he said in 2012. He said as much again in 2015 at an Aspen Institute event. “Ninety-five percent of your murders — murderers and murder victims — fit one M.O. You can just take the description, Xerox it and pass it out to all the cops. They are male, minorities, 16 to 25. That’s true in New York, that’s true in virtually every city.”

He continued: “People say, ‘Oh my God, you are arresting kids for marijuana who are all minorities.’ Yes, that’s true. Why? Because we put all the cops in the minority neighborhoods. Yes, that’s true. Why’d we do it? Because that’s where all the crime is. And the way you should get the guns out of the kids’ hands is throw them against the wall and frisk them.”

Bloomberg was wrong about the efficacy of stop and frisk. According to a 2013 report from the public advocate’s office (then run by the current mayor of New York, Bill de Blasio), stopping a black New Yorker was half as likely to yield a weapon as stopping a white New Yorker, and one-third as likely to yield drugs and other contraband. The reason was simple. A disproportionate number of those convicted of violent crime may have been young men of color, but the vast majority of young men of color weren’t involved in violent crime or any crime at all. Stopping someone on the basis of race was a recipe for false positives; stopping on the basis of actual suspicious behavior, on the other hand, would yield results, which is what happened when police stopped white residents.

But Bloomberg didn’t care to get it right. He believed that to stop crime he had to control the city’s black and brown people. And that’s what he did, without apology or remorse, until it was politically necessary to express regret.

Muslims received similar treatment. Under Bloomberg, the NYPD spied on and surveilled New York Muslims, using both informants and undercover agents to gather information from inside mosques and restaurants, neighborhoods and social groups. Police tracked students, photographed worshipers and used census data to map the geography of Muslim life in the city. It was, like stop and frisk, a flagrant violation of civil liberties even if it was technically legal. And Bloomberg was equally unapologetic. “We have to keep this country safe,” he said, addressing questions about the program after it was uncovered by The Associated Press.

Bloomberg has apologized for stop and frisk (although not for spying on New York’s Muslim communities). However, there’s no indication that he has really changed; no evidence that he’s dropped the commitment to racial control. But even if he has, liberals outraged at Trump’s racism should feel similar anger toward Bloomberg’s record in New York. They should be appalled by a man who, when he was entrusted with the power of the state, used it to terrorize innocent people on the basis of race and religion.

And in the same way that liberals fear for the future of democracy under four more years of Trump, they should fear for the implications of giving four years, period, to Bloomberg. Given his record, he’s someone who might try to consolidate Trumpism — moderating its hostilities into less disruptive form — rather than reject it wholesale.

Yes, Bloomberg might be the one to beat Trump at the ballot box. But he’s also the one who might put a Trumpist stamp on American liberalism."

Opinion | The Trumpian Liberalism of Michael Bloomberg - The New York Times
Posted by John H Armwood II at 7:22 AM