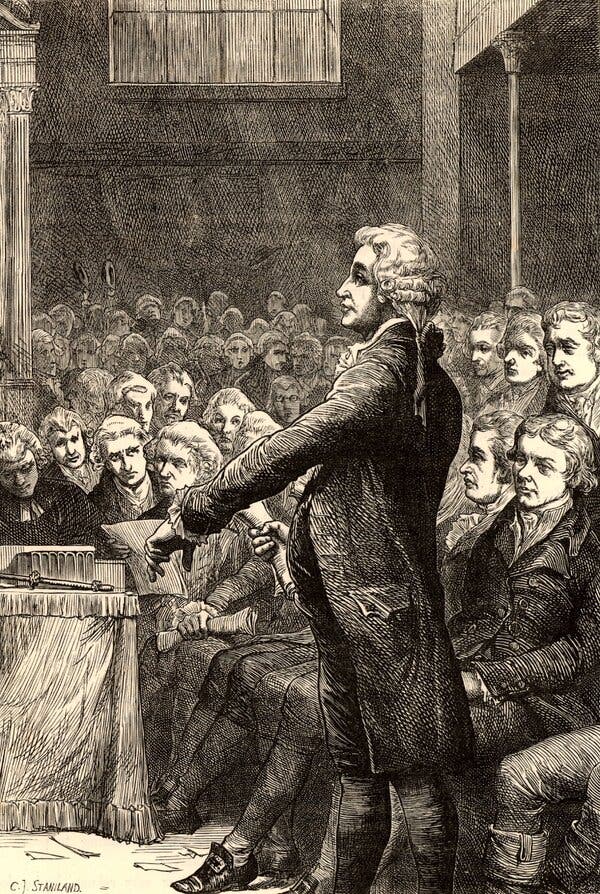 A view from the other side, the father of Conservatism,  Edmund Burke.   His seminal work "Reflections on the Revolution in France" is fundamental reading for any student of Political Theory of Political Science.

"He reminds us it’s hard to respect democratic political institutions while disdaining the founders of those institutions.

Had it not been for the revolution in France, Edmund Burke would likely have been remembered, a bit vaguely, as an 18th-century philosopher-statesman of extravagant rhetorical gifts but frustratingly ambivalent views. The Irish-born member of the British Parliament was sympathetic to the grievances of the American colonies but not (like his onetime friend Thomas Paine) an enthusiastic champion of their independence; an acerbic critic of George III but a firm defender of monarchy; a staunch opponent of English rapacity in India but a supporter of British Empire; an advocate for the gradual emancipation of at least some slaves, but no believer in equality.

He was also an unabashed snob. “The occupation of a hairdresser,” he wrote, “cannot be a matter of honor to any person.”

Burke’s name endures because of his uncompromising opposition to the French Revolution — a view he laid out as some of Britain’s more liberal thinkers thought it represented humanity’s best hopes. “Reflections on the Revolution in France” was published in November 1790, more than a year after the fall of the Bastille but before the Reign of Terror, when it still seemed possible that Louis XVI would survive as a constitutional monarch and the country wouldn’t descend into a blood bath.

Burke foresaw, more accurately than most of his great contemporaries, what the revolution would bring: the executions of Louis and Marie Antoinette; the ineffectuality of moderate revolutionary leaders (“a sort of people who affect to proceed as if they thought that men may deceive without fraud, rob without injustice, and overturn every thing without violence”); the rise of a military dictator in the mold of Napoleon; and a long European war in which the “Republic of Regicide” would seek to subjugate the world in the name of liberating it.

How did Burke get it right about the ultimate course of events in France — and, by extension, so many subsequent revolutions that aimed to establish morally enlightened societies and wound up producing despotism and terror? The question is worth pondering in light of two main ideological currents of today: the tear-it-all-down populism that has swept so much of the right in the past five years and the tear-it-all-down progressivism that threatens to sweep the left.

At the core of Burke’s view of the revolution is a profound understanding of how easily things can be shattered in the name of moral betterment, national purification and radical political transformation. States, societies and personal consciences are not Lego-block constructions to be disassembled and reassembled with ease. They are more like tapestries, passed from one generation to the next, to be carefully mended at one edge, gracefully enlarged on the other and otherwise handled with caution lest a single pulled thread unravel the entire pattern. “The nature of man is intricate; the objects of society are of the greatest possible complexity,” Burke wrote. “And therefore no simple disposition or direction of power can be suitable either to man’s nature, or to the quality of his affairs.”

Burke’s objection to the French revolutionaries is that they paid so little attention to this complexity: They were men of theory, not experience. Men of experience tend to be cautious about gambling what they have painstakingly gained. Men of theory tend to be reckless with what they’ve inherited but never earned. “They have wrought underground a mine that will blow up, at one grand explosion, all examples of antiquity, all precedents, charters, and acts of parliament. They have ‘the rights of men.’ Against these there can be no prescriptions.”

Not that Burke was against rights per se. The usual caricature of Burke is that he is the conservative’s conservative, a man for whom any type of change was dangerous in practice and anathema on principle. That view of him would have astonished his contemporaries, who knew him as a champion of Catholic emancipation — the civil rights movement of his day — and other reformist (and usually unpopular) causes.

A fairer reading of Burke would describe him as either a near-liberal or a near-conservative — a man who defied easy categorization in his time and defies it again in ours. He believed in limited government, gradual reform, parliamentary sovereignty and, with caveats and qualifications, individual rights. But he also believed that to secure rights, it wasn’t enough simply to declare them on paper, codify them in law and claim them as entitlements from a divine being or the general will. The conditions of liberty had to be nurtured through prudent statesmanship, moral education, national and local loyalties, attention to circumstance and a healthy respect for the “latent wisdom” of long-established customs and beliefs. If Burke lacked Thomas Jefferson’s clarity and idealism, he never suffered from his hypocrisy.

All of this may sound suspicious to modern readers, especially progressive ones. But consider what Burke might have made of Trump and Trumpism. He would have been bemused by the phrase “drain the swamp”: To take the metaphor seriously, one would end up destroying all the life within the swamp, leaving only mud. He would have been revolted by the Trump family’s self-dealing: Among the great causes of Burke’s life was his role in the impeachment of Warren Hastings, the de facto governor general of India, for corrupt and cruel administration.

Above all, Burke would have been disgusted by Trump’s manners. “Manners are of more importance than laws,” he wrote.

“The law touches us but here and there, and now and then. Manners are what vex or soothe, corrupt or purify, exalt or debase, barbarize or refine us …. They give their whole form and color to our lives. According to their quality, they aid morals, they supply them, or they totally destroy them.”

Burke’s understanding of the centrality of manners to norms, of norms to morals, of morals to culture and of culture to the health of the political order means that he would have been unimpressed by claims that Trump had scored policy “wins,” like appointing conservative judges or cutting the corporate tax rate. Those would have been baubles floating in befouled waters.

Trump’s real legacy, in Burke’s eyes, would be his relentless debasement of political culture: of personal propriety; of respect for institutions; of care for tradition; of trust between citizens and civil authority; of a society that believes — and has reason to believe — in its own essential decency. “To make us love our country,” he wrote, “ our country ought to be lovely.”

Then again, Burke would have been no less withering in his views of the far left. “You began ill,” he said of the French revolutionaries, “because you began by despising everything that belonged to you.”

For Burke, the materials of successful social change had to be found in what the country already provided — historically, culturally, institutionally — not in what it lacked. Britain became the most liberal society of its day, Burke argued, because it held fast to what he called “our ancient, indisputable laws and liberties,” handed down “as an inheritance from our forefathers.” Inheritance, he added, “furnishes a sure principle of transmission; without at all excluding a principle of improvement.”

A vandalized statue of George Washington in Washington Square Park in New York.Jason Szenes/EPA, via Shutterstock

The people now pulling down statues of Thomas Jefferson and George Washington and spray-painting “1619” on them may believe they are striking a blow against the racial hypocrisy of the founding fathers. But if Burke were alive now, he would likely note that people who trade ancient liberties — freedom of speech, for instance — for newfangled rights (freedom from speech) could soon wind up with neither. He’d observe that it may not be easy to teach respect for democratic political institutions while inculcating contempt for the founders of those institutions. He’d suggest that if protesters want to make the case for fuller equality for all Americans, better to enlist the memory of the founders in their cause than hand them over to their political opponents to champion. He’d caution that destructiveness toward property tends to lead to violence toward people.

And he’d warn that the damage being done — to civil order, public property and, most of all perhaps, to the values demonstrators claim to champion — may not be easy to undo. “Rage and phrensy will pull down more in half an hour, than prudence, deliberation and foresight can build up in a hundred years.”

Because Burke champions a different concept of liberty than the one most Americans cherish, it may be easy to dismiss his teachings as interesting but ultimately irrelevant. George Will, in his magnum opus “The Conservative Sensibility,” speaks of Burke as a “throne-and-altar” conservative of little relevance to American experience. Whatever else might be said of events in places like Portland or Seattle, it is not the storming of the Bastille, and wokeness isn’t Jacobinism — at least not yet. The time to write “Reflections on the Revolutions in America” is still a ways off.

A ways off — but ever more visible on the horizon. To read and admire Burke does not require us to embrace his views, much less treat him as a prophet. But it’s an opportunity to learn something from a man who saw, more clearly than most, how “very plausible schemes, with very pleasing commencements, have often shameful and lamentable conclusions.”