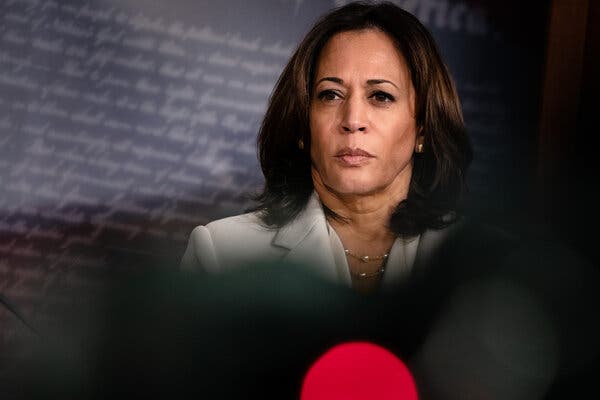 "I have been saying this since she first entered the Presidential race.

She is the perfect person to build a case against the president.

Ladies and gentlemen of the jury, our case today is against the most powerful man in the world. And using the most powerful weapon of government by the people, you can hold this man accountable for the first time in his life, when you pass judgment on Nov. 3.

We will show that President Trump has made a mockery of the Constitution, has lied to you more than 20,000 times and is currently trying to sabotage the Postal Service in a desperate bid to cling to power. But worst than any of that, he is responsible for thousands of Americans who have died during his willful mismanagement of the pandemic. The case against him is “open-and-shut,” as your prosecutor said Wednesday, and factually incontrovertible.

That prosecutor, Senator Kamala Harris, is a woman who has spent most of her professional life going after criminals. And since that prosecutor will occupy a space inside Trump’s head for the next three months, he should grant her the decency of properly pronouncing her name. It’s not Ca-mall-uh, as he has said. It’s Comma-la.

Let the record show that she has already called him what he is. “I know predators, and we have a predator living in the White House,” she said last year. “The thing you must importantly know, predators are cowards.”

So, to the case: Let’s begin with the loss of more than 165,000 lives from Covid-19 in the United States, on Trump’s watch, and maybe as many as 200,000. Each of them had a story, a life, people they loved and were loved by. Now gone before their time. Their voices cry out from the grave.

You’ve already heard that the United States, with barely 4 percent of the world’s population, has 25 percent of the coronavirus cases. And that the U.S. leads the world in total number of deaths, with a fatality rate five times higher than the global average. Remember that the next time he praises himself.

But just consider a single day, Tuesday, when Joe Biden announced Harris as his pick. Covid-19 took the lives of 1,450 people in the United States on that one day. For Canada, it was four.

Trump owns this failure. We are a pariah nation, shunned and pitied, unable to travel outside our borders, prisoners of his fatal malfeasance.

Some of you have excused this president’s incompetence, his quackery, his buffoonery, his vile character, his consistent insults of women, minorities, the free press, the courts — so long as it was just the daily respiration of a narcissist. But we know now, and you must never forget, that his ignorance is lethal.

Other countries in the world — the places where people are watching sports in stadiums, where kids are going to school without fear, where businesses have been saved — had a national plan. Trump has never had one. Instead, he tweeted conspiracy nonsense from an ex-game show host and promoted ingesting household disinfectants.

The presidency, as Biden says, “is a duty to care.” This president has failed at the primary duty to keep you safe. Every day, he’s finding new ways to make your life miserable. He is actively working to take away health care from millions, through his assault on Obamacare. His attack on the Postal Service, if successful, is not just an attempt to break this democracy, but could also deprive many of you from getting your lifesaving meds on time.

But the economy, he will say. It was the best ever until the pandemic. Not true. With his tax cuts for the rich that blew a trillion dollar hole in the federal budget, he promised economic growth of up to 6 percent. It never got to even half that high in the first three years of his presidency. Unemployment now is at Depression-era levels.

“He inherited the largest economic expansion in history,” as your prosecutor said. “And then, like everything else he inherited, he ran it straight into the ground.”

What has this president done to protect his base of working-class whites, many of them deemed “essential” workers? Nothing. As we speak, he’s trying to take way the rights of workers to sue an employer in an unsafe workplace.

He will distract you by trying to tie the Democratic ticket to the intolerant, mob-ruled far left, epitomized by the Jacobins on the Seattle City Council who recently hounded out the city’s first female African-American police chief.

But those who rule by bullhorn and bullying have nothing in common with your prosecutor and her running mate. As she has said, “No good public policy ends with an exclamation point.”

He will even say that Joe Biden, a Roman Catholic who regularly attends church, is “against God.” The last time Trump went to church he used chemical irritants against peaceful protesters to get there, for a photo op.

Most of you have made up your mind. For those who haven’t, the prosecutor will close with what she opened with. The United States is “in tatters.” Look around at the shuttered businesses, the hospitals stuffed with those struggling to breathe, Americans at each other’s throats. This president offers you no way out. You alone can show him the door."

Opinion | Kamala Harris, the Prosecutor Trump Fears Most - The New York Times
Posted by John H Armwood II at 6:53 AM