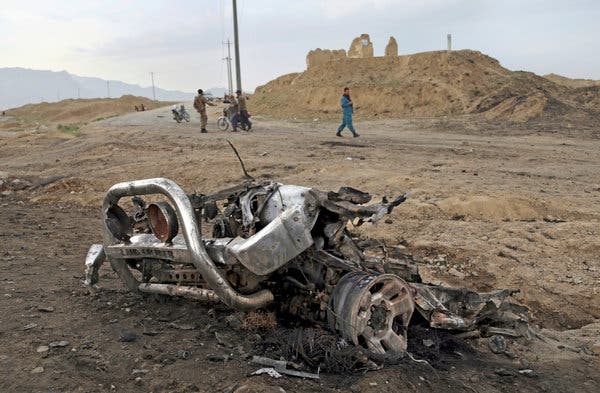 "It’s exceedingly difficult to believe that no one told the president about the intelligence on Russian efforts to harm Americans in Afghanistan.

Wreckage at the site of an attack in April 2019 in which three American service members were killed near Bagram Air Base in Afghanistan.

Since at least February, and possibly as early as March 2019, the United States has had compelling intelligence that a committed adversary, Russia, paid bounties to Taliban-linked fighters to kill American troops in Afghanistan. American service members were reportedly killed as a result.

To this day, the president of the United States has done nothing about it.

Instead, President Trump dismissed the intelligence as not “credible” and “possibly another fabricated Russia hoax, maybe by the Fake News” that is “wanting to make Republicans look bad!!!”

Mr. Trump also claimed that neither he nor Vice President Mike Pence was ever told about this critical intelligence before it was first reported in The New York Times. Setting aside for a moment the credulity of that claim, whenever the president learned of this deeply troubling intelligence, why did he not publicly condemn any Russian efforts to kill American soldiers and explore options for a swift and significant U.S. response?

None of this adds up.

As a former national security adviser, I find it exceedingly difficult to believe that no one told Mr. Trump about this intelligence.

It was reportedly contained in the president’s daily briefing, which is provided to all top-level national security officials. Even if Mr. Trump does not bother regularly to read the daily briefing, we must assume others do. If the president’s senior advisers — Robert O’Brien, the national security adviser; Richard Grenell, who stepped down in May as acting director of national intelligence; and Secretary of Defense Mark Esper, among others — thought it was unnecessary to inform the commander in chief of this life-or- death matter, then they are not worthy of service.

White House officials claim that it would be improper to inform the president of such information until it is fully verified and options for the U.S. response had been prepared. Yet, the administration reportedly informed the British government, and the National Security Council convened an interagency meeting in March to discuss the intelligence and its implications.

Here’s what should have happened. Had I, as national security adviser, received even “raw” reporting that Russia was paying to kill U.S. service members, I would have walked straight into the Oval Office to brief the president.

Contrary to the spin-masters in the White House today, I would not have waited until we had absolute certainty. I would have said, “Mr. President, I want to make sure you are aware that we have troubling reporting that Russia is paying the Taliban to kill our forces in Afghanistan. I will work with the intelligence community to ensure the information is solid. In the meantime, I will convene the national security team to get you some options for how to respond to this apparent major escalation in Russia’s hostile actions.”

If later the president decided, as Mr. Trump did, that he wanted to talk with President Vladimir Putin of Russia at least six times over the next several weeks and invite him to join the Group of 7 summit over the objections of our allies, I would have thrown a red flag: “Mr. President, I want to remind you that we believe the Russians are killing American soldiers. This is not the time to hand Putin an olive branch. It’s the time to punish him.”

This is what would have happened in any prior administration of either political party.

That it apparently did not is deeply troubling and raises myriad questions. If Mr. Trump was told about Russian actions, why did he not respond? If he was not told, why not? Are his top advisers utterly incompetent? Are they too scared to deliver bad news to Mr. Trump, particularly about Russia? Is Mr. Trump running a rogue foreign policy utterly divorced from U.S. national interests? If so, why?

He denied and dismissed Russian interference in the 2016 election, then took Mr. Putin at his word at a Helsinki meeting while undercutting the U.S. intelligence community, and obstructed the Mueller investigation and distorted its findings. Mr. Trump recklessly removed U.S. troops from northern Syria and allowed Russian forces to take over American bases.

Next, Mr. Trump unilaterally invited Mr. Putin to attend the Group of 7 meeting, a move that apparently upended the organization’s annual summit. Subsequently, without any consultation, Mr. Trump announced his decision to remove nearly a third of U.S. troops from Germany — a sudden and inexplicable withdrawal that weakens the U.S.-German relationship and harms NATO, while benefiting Russia.

Most recently, we have learned that even Russian efforts to slaughter American troops in cold blood do not faze this president. Mr. Trump brushes off the information, evades responsibility and fails to take action — not even lodging a diplomatic protest. Now Mr. Putin knows he can kill Americans with impunity.

What must we conclude from all this? At best, our commander in chief is utterly derelict in his duties, presiding over a dangerously dysfunctional national security process that is putting our country and those who wear its uniform at great risk. At worst, the White House is being run by liars and wimps catering to a tyrannical president who is actively advancing our arch adversary’s nefarious interests.

Susan E. Rice (@AmbassadorRice), the national security adviser from 2013 to 2017 and a former United States ambassador to the United Nations, is a contributing opinion writer. She is the author of the memoir, “Tough Love: My Story of the Things Worth Fighting For.”

Opinion | Why Does Trump Put Russia First? - The New York Times
Posted by John H Armwood II at 8:53 AM