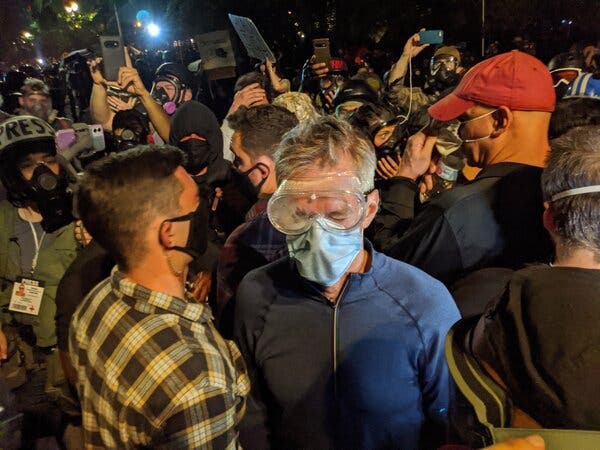 "Mayor Ted Wheeler denounced federal officers for an “egregious overreaction.” Some protesters mocked him, recalling the city police’s use of tear gas on demonstrators.

PORTLAND, Ore. — The mayor of Portland, Ted Wheeler, was left coughing and wincing in the middle of his own city Wednesday night after federal officers deployed tear gas into a crowd of protesters that Mr. Wheeler had joined outside the federal courthouse.

Mr. Wheeler, who scrambled to put on goggles while denouncing what he called the “urban warfare” tactic of the federal agents, said he was outraged by the use of tear gas and that it was only making protesters more angry.

“I’m not going to lie — it stings; it’s hard to breathe,” Mr. Wheeler said. “And I can tell you with 100 percent honesty, I saw nothing which provoked this response.”

He called it an “egregious overreaction” on the part of the federal officers, and not a de-escalation strategy.

But the Democratic mayor, 57, has also long been the target of Portland protesters infuriated by the city police’s own use of tear gas, which was persistent until a federal judge ordered the city to use it only when there was a safety issue. As Mr. Wheeler went through the crowds on Wednesday, some threw objects in his direction, and others called for his resignation, chanting, “Tear Gas Teddy.”

After a large wave of tear gas sent Mr. Wheeler away from the scene, some protesters mocked him, asking how it felt. Mr. Wheeler said that joining the protesters at the front of the line was just one way he was going to try to rid the city of the federal tactical teams.

“A lot of these people hate my guts,” Mr. Wheeler said in an interview, looking around at the crowd. But he said they were unified in wanting federal officers gone.

Protesters expressed frustration with Mr. Wheeler as he went through the crowd on Wednesday.Credit...Mason Trinca for The New York Times

The mayor has called for federal agents to leave the city after they arrived to subdue the city’s long-running unrest. Dressed in camouflage and tactical gear and unleashing tear gas, federal officers have clashed violently with protesters and pulled some people into unmarked vans in what Gov. Kate Brown called “a blatant abuse of power.”

Some protesters called the mayor’s arrival at the protest scene a photo op. Sean Smith, who has been at the protests for weeks, said Mr. Wheeler, who also serves as police commissioner, needs to take more action to control his Police Department and align with protesters.

“He should probably be out here every night,” Mr. Smith said.

By early Thursday morning, with protesters still outside both the federal courthouse and the county justice center across the street, federal officers continued deploying tear gas and the Portland Police Bureau repeatedly warned that city officers might also use it.

The demonstrations, fueled by a wide array of grievances, including against police brutality, have rocked Portland for 55 consecutive nights, persisting even as other protests have waned in many other parts of the country since the killing of George Floyd in police custody in Minneapolis.

The city has become a target of President Trump, who has embraced a law-and-order message in his re-election campaign. While federal officers were deployed to Portland to purportedly quell unrest and protect federal property, their arrival has only galvanized the movement, with the numbers of protesters each night swelling into the thousands.

On Wednesday night and into Thursday morning, protesters gathered around a temporary fence that federal officers had erected during the day. They shot fireworks at the building, and some breached the fence. Federal officers, wearing camouflage and tactical gear, emerged to fire tear gas and less-lethal munitions, and to arrest those who breached the fence.

While the Trump administration has labeled the protesters “violent anarchists,” Mr. Wheeler decided to go into the crowd on Wednesday night for what he deemed a “listening session,” and even after people were following and cursing him, he ended up spending three hours there.

At times he was jeered, such as when he told the crowd that he would not promise to abolish the Police Department. Other times, he drew cheers, such as when he demanded that the federal government “stop occupying our city.”