'A nightmare': why were a black couple targeted in a shocking Texas police raid?

'A nightmare': why were a black couple targeted in a shocking Texas police raid?

Fort Worth police have still not said why Nelda Price and her husband John, who died weeks later, were restrained in their pajamas 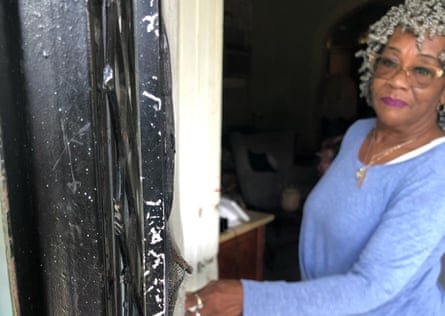 "Nelda Price, who was forced from her home by police with guns drawn: ‘It was like a nightmare. You just don’t expect something like that to happen.’Photograph: Porcha Dews

While the police in Fort Worth, Texas, ransacked Nelda Price’s home, an officer directed her to put her hands together – as if she were praying – so he could restrain her with zip ties.

“I told him, ‘I am praying. Because I don’t understand why you’re here, and I don’t know what this is about,’” Nelda told the Guardian.

On 11 March, she and her husband John, both Black and in their late 60s, had been chatting in the dining room, dressed for bed, when a noise interrupted them. Nelda’s first instinct was to get up and investigate, but after John thought he heard gunshots, he pushed her to the floor.

By the time they looked up, Fort Worth police had already broken through their iron gate and were storming the front door, guns drawn. Without any explanation, the officers demanded that John and Nelda put their hands up, then took them outside for questioning.

In a traumatic spectacle that lasted hours, about 20 or 30 policemen loudly tore through the Prices’ belongings as emergency vehicles swarmed the block. The elderly couple waited outdoors in their pajamas and nightgown; after asking several times, Nelda was finally allowed to grab a sweater.

No one would answer any of the Prices’ questions about what was happening, even as several officers pointed out red flags that their colleagues had targeted the wrong people. Police refused Nelda’s pleas for John’s medication – until his blood pressure spiked so high that they called an ambulance.

Once Nelda and John were allowed back inside, they discovered a search warrant lying on the dining room table, allegedly connecting them to methamphetamines and narcotics trafficking.

“We simply don’t know why the Fort Worth police department got things so terribly wrong. We only know that they did,” said Kay Van Wey, a personal injury trial lawyer representing Nelda in her lawsuit against the city.

Fort Worth police have refused to provide Van Wey with the underlying basis for a no-knock search warrant against the Prices and told the Guardian they could not comment on pending or current litigation.

Unlawful detention, excessive force and violations of the Prices’ constitutional rights all factored in the devastating incident last March, the suit alleges, representing another example in a litany of high-profile tragedies that have underscored the department’s record of racial profiling and bias-based policing.

The department has faced widespread condemnation for years because of police brutality against minority communities.

“We certainly contend that this was not a product of an individual’s behavior, but rather the product of systemic, structural and institutional racism,” Van Wey said.

Almost a decade ago, Fort Worth officer Jon Romer fatally shot disabled father Charal “Ra Ra” Thomas as Thomas’s children watched. Romer was only fired in 2019 after being convicted of aggravated perjury in connection to a separate beating of a young Black man.

In 2015, officer Courtney Johnson, who later resigned, accidentally shot and injured Craigory Adams, a man with mental health issues who carefully dropped to one knee as Johnson approached him. The following year, when Jacqueline Craig called Fort Worth police for help because a neighbor had choked her young son, officer William Martin violently arrested her and her teenage daughters instead.

After Dorshay Morris reported a domestic disturbance involving her boyfriend in 2017, police tasered her to the ground and shackled her with handcuffs. Then, last year, Atatiana Jefferson became the sixth person killed by Fort Worth officers in a matter of months when Aaron Dean shot her through a window while she was babysitting her eight-year-old nephew.

Community members believe that Fort Worth “is doing little or nothing to improve race relations, racial equity, and cultural awareness”, the city council’s taskforce on race and culture wrote in a 2018 report. African Americans represented 41% of all arrests in 2016 and 2017, despite only accounting for 19% of the city’s population, the taskforce found.

More recently, an expert review panel expressed concerns that the Fort Worth police “are not consistently adhering to policies to avoid force during encounters with community members”, and that the department isn’t enforcing those safeguards, either.

“They are operating like this is the wild, wild west, and there are no rules,” said Pamela Young, a community organizer with the grassroots organization United Fort Worth. “There’s no consistent accountability.”

As police rummaged through the Prices’ house, they were surrounded by antiques John had collected and other indicators that they were inside the modest home of two senior citizens. They still tossed shoes and suits around like trash, and ravaged the new kitchen cabinets Nelda and John had saved for years to afford.

After the incident, she was too nervous and upset to work for days, while John got quiet and stopped acting like himself. He told her he was OK, but after half a century of marriage, she knew better. John died in May of unknown causes.

She still has no idea why her home was attacked, and, now alone, she’s triggered by something as seemingly innocuous as a police SUV circling her block.

“What we’re really, really asking for, is that the city take a very hard look at what happened here, and be willing to begin a dialogue with Nelda, listen to her story, and use this incident as a training example,” Van Wey said. “A way to figure out where their systems broke down, and fix them.”

Opinion | No One Expects Civility From Republicans
Posted by John H Armwood II at 4:30 PM