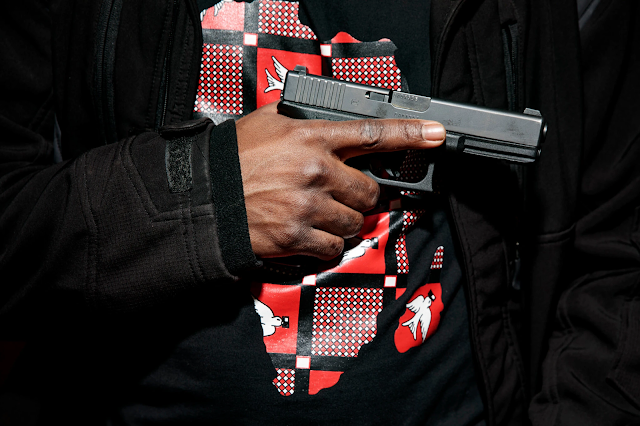 Black and Armed
The surge in Black gun-buying is a response to America’s failing to create a society where all citizens feel safe.
Charles M. Blow
By Charles M. Blow
Dec. 20, 2020
"Credit...Damon Winter/The New York Times
Growing up in rural northern Louisiana, everyone I knew, at least every household, seemed to have guns. Men had guns racked in the back windows of their pickup trucks, and pistols under their seats. Women, like my mother, tucked smaller handguns into their purses.
My hometown, Gibsland, a flyspeck of a place, was and is majority Black. Gun ownership was the norm in those parts, including in the Black community. It was not associated with danger but with safety. There were many older Black people in the South who could tell stories about a time when they were left to defend themselves against the threat of white terror, a father or an uncle or a brother sitting on a porch with a rifle through the night, should trouble come.
Indeed, one could argue that the right to bear arms in this country has never been so brazenly and openly abridged as it has against Black people. Many state codes prohibited Black gun ownership before the Civil War and allowed for the disarmament of Black people after. Many Black people saw these as attempts to prevent them from defending themselves against terror. Some efforts at gun control, such as those in the 1960s at the height of the Black Power movement, have been seen by historians as explicitly targeted at Black people.
As Adam Winkler reported for The Atlantic in 2011, the Safe Streets Act of 1968 and the Gun Control Act of 1968, “expanded the federal licensing system for gun dealers and clarified which people — including anyone previously convicted of a felony, the mentally ill, illegal-drug users, and minors — were not allowed to own firearms.” The laws also “restricted importation of ‘Saturday Night Specials’ — the small, cheap, poor-quality handguns so named by Detroit police for their association with urban crime, which spiked on weekends.”
ADVERTISEMENT
Continue reading the main story
Mr. Winkler continued, “Because these inexpensive pistols were popular in minority communities, one critic said the new federal gun legislation ‘was passed not to control guns but to control blacks.’”
Gift Subscriptions to The Times, Cooking and Games.
Starting at $25.
Folks in my hometown, including single mothers like mine, also drove pieced-together, secondhand and thirdhand cars, sometimes at night, to larger, neighboring towns to shop for groceries or other needs. More often than one would like to believe, those cars broke down on a lonely stretch of pitch-black road, and people would have to walk to the nearest light, a friendly-seeming stranger’s home or a small roadside store, sometimes with children in tow, to look for help.
Particularly in the days I grew up, there was no roadside assistance on call, no cellphones and, in our town, there was only one police officer. Being armed was often the only way that people could feel safe.
Beyond safety though, guns were and are seen as a tool in these agrarian regions: rifles used for hunting, to slaughter livestock or to keep vermin out of the garden and snakes out of the grass.
Children, particularly boys, were trained to use guns from the time they were toddlers, graduating from cap guns, to BB guns, to pellet guns, to small rifles. It was nothing at all unusual to see a pack of boys walking the streets with their weapons, on their way to target shoot at cans or some such.
Editors’ Picks
The 20 Phrases That Defined 2020
What Can America Learn From South Africa About National Healing?
We Know How to Curb the Pandemic. How Do We Make People Listen?
Continue reading the main story
ADVERTISEMENT
Continue reading the main story
When I went away to college, my mother gave me a pistol, “just in case.” (Luckily, no such case presented itself.)
When I moved north, first to Detroit and then to New York, I moved into a mental space of more stringent gun control. In general, people weren’t hunting. There was law enforcement everywhere, reachable as quickly as one could dial 911. There were cellphones.
Armed crimes were rampant as well as shootings and gun-related homicides. There were mass shootings and drive-by shootings, all phenomena foreign to me. In my mind, city dwellers simply didn’t have the same need for weapons as the people in the rural community where I was raised, and many were also not reared with the respect for and knowledge of weapons we possessed.
I, like many, were convinced that fewer guns in the Black community would make it safer. But, for many Black people, that sentiment has turned. Since the gun-buying surge in the wake of the Obama presidency, the unrelenting series of unarmed Black people being killed on video and the uncertainty brought on by the pandemic, gun sales to Black people are surging. According to an October CNN report, gun sales among Black Americans were up 58 percent through September.
I, as much as anyone, would like to live in a society in which all citizens felt safe without the need of personal firearms. America could have created such a society. However, it chose not to.
Sure, there are still hunters and farmers and people living in rural areas who use rifles as a tool. There are people who use guns for sport or who collect them. But, there are also people who buy and hoard guns because they have been fed a dystopian fantasy of a race war or a government takeover.
It seems to me that the surge in Black gun-buying is in large part simply a response to that. As has been the case since slavery, many Black people feel the need to defend themselves from their own country."
Opinion | Black and Armed - The New York Times
Posted by John H Armwood II at 11:01 AM