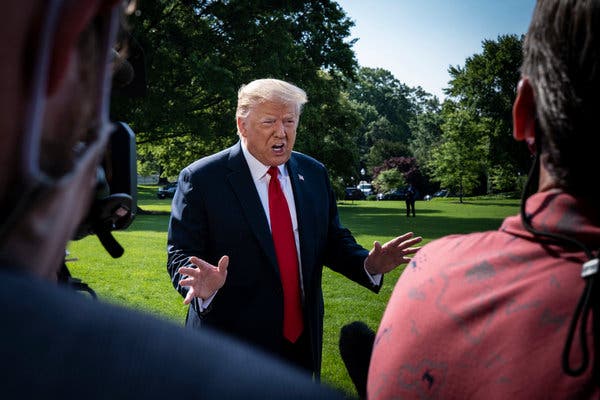 "President Trump is leaning hard into his decades-long habit of falsely portraying some black Americans as dangerous or lawless. And he is doing it during one of the most tumultuous periods in decades.

President Trump has repeatedly pushed inflammatory language, material and policies in recent days that seek to divide Americans by race as he tries to appeal to his predominantly white base of voters four months before Election Day rather than try to broaden his support.

Trailing in national polls and surveys of crucial battleground states, and stricken by a disappointing return to the campaign trail, Mr. Trump has leaned hard into his decades-long habit of falsely portraying some black Americans as dangerous or lawless. And he has chosen to do so at one of the most tumultuous periods in decades as Americans protest recent episodes of police brutality against black people that have highlighted the nation’s long history of racial injustice.

Over the last few days the president has tweeted context-free videos of random incidents involving black people attacking white people and baselessly argued that President Barack Obama, the country’s first black leader, committed “treason.” In an interview with the Catholic News Agency that was posted online on Monday, Mr. Trump said he planned to sign an order to protect national monuments at a time when statues of Confederate generals are being torn down across the country.

Leaving for a trip to Arizona on Tuesday, Mr. Trump spoke of protesters near the White House the night before who tried to remove a statue of Andrew Jackson, declaring that he wants “long-term jail sentences for these vandals and these hoodlums and these anarchists and agitators.”

As president, Mr. Trump has rarely been so inflammatory on race in such a narrow window of time, from his recent tweet about a doctored video purportedly showing a “racist baby” to his use of a racist phrase — “Kung flu” — to describe the coronavirus at his rally in Tulsa, Okla., on Saturday.

On Tuesday, Twitter suspended the account of the meme creator who is a favorite source of material for the president, and who had produced the “racist baby” video that Mr. Trump tweeted.

Asked about Mr. Trump’s statements, Tim Murtaugh, a campaign spokesman, pointed to the president’s recent executive order related to policing and said he had a “tremendous record” on issues related to black Americans. “The president has also firmly stood for law and order and against violent destruction and vandalism, and he knows that all communities need to be able to live in peace in order to have prosperity,” he said.

Mr. Trump, who has waged only one campaign before this one, is effectively running a primary contest in a general election. Answering to his own instincts and what he thinks “my people” want, as he often puts it to advisers, the president is exploiting racial divisions in a way that appeals to only a segment of his party.

As political strategy goes, it’s confounding: First-term presidents historically have sought to broaden their support before their re-elections, but it’s especially peculiar given the fast-shifting views of moderate white voters and some Republicans on matters of race.

“I can speak from personal experience in Oklahoma City: white Republicans are having these uncomfortable conversations and are wanting to have them,” said David F. Holt, the city’s Republican mayor. “I’m seeing a broad consensus of support and empathy for the issues being raised by the Black Lives Matter movement.”

While Mr. Trump’s views on race and the protests have been out of step for weeks with many Americans, he has, in recent days, tried to rally his supporters on matters related to race, such as claiming without evidence that progressives have broadly labeled his voters as racists. In tweets, videos and at his campaign rally last Saturday, he has portrayed protesters as a threat in ways that are bound to heighten divisions rather than unite cross-sections of Americans.

A new New York Times Upshot/Siena College survey illustrates the chasm between the president and even many right-leaning voters on issues of race. While Mr. Trump rages about protesters and threatens them with violence, large portions of his party are far less hostile.

Over half of voters surveyed who said they were somewhat conservative, and even a quarter of voters who called themselves very conservative, had a favorable view of the Black Lives Matter movement.

Just as significant, some Republican-leaning voters are plainly uneasy with Mr. Trump’s conduct in the last month. About 46 percent of somewhat conservative voters said they disapproved of the president’s handling of the racial justice protests, and 70 percent of moderates said the same.

In ignoring those trends, Mr. Trump is appealing directly to his most conservative, devoted supporters, whom he has constantly been afraid of losing but who are hardly sufficient to re-elect him.

As his political challenges have intensified, Mr. Trump is stepping up his focus on race and “heritage,” in references to totems like statues of Confederate generals. He has vowed to defend a statue of Jackson, the president who owned slaves and signed a law that led to the forcible removal of thousands of Native Americans from their lands.

On Monday night, Mr. Trump retweeted users who posted video featuring black people physically assaulting white people, including one that was a year old. Days earlier, Twitter affixed a “manipulated media” tag to a video Mr. Trump tweeted that portrayed a fabricated CNN segment in which Trump supporters were maligned as racist.

At his rally in Tulsa, which drew far fewer supporters than anticipated, Mr. Trump made no mention of the massacre of black residents in the city’s Greenwood section in 1921, or of the Juneteenth holiday a day earlier that celebrated the end of slavery. Instead, he again bemoaned the tearing down of statues.

In an interview on Fox News on Tuesday morning, Mr. Trump said that people who ignore history will repeat it, and then said: “You don’t want to take away our heritage and our history and the beauty.”

As protesters try to tear down statues of a range of historical figures and spray paint buildings, including the St. John’s Church adjacent to the White House, some Democrats are beginning to cringe.

But Mr. Trump has been unwilling to spotlight the destruction of statues dedicated only to broadly popular figures, such as George Washington and Ulysses S. Grant. His inclination on race is always to reach for the most incendiary rhetoric, lest his supporters miss the point.

In some ways, his conduct recalls the period leading up to the 2016 Republican nomination, when he twice called for a ban on Muslims entering the United States and openly wielded race in a way that appealed to large segments of the G.O.P., but also alienated many people in the party.

Mr. Trump, however, is no longer a political novice running in a crowded field in which he needs to garner only a plurality to claim victory — as he did in 2016. He’s a sitting president facing a difficult re-election at a moment the country has been battered by crises and is desperately seeking leadership.

No matter how much his advisers and lawmakers nudge him to project unity and bigness, however, he keeps bingeing on the political equivalent of comfort food — convinced that it’s what his most loyal supporters crave.

But some aides and more than a few Republicans worry that, satisfying as this approach may be to him in the moment, it does not offer a path to 270 Electoral College votes, let alone help the G.O.P. retain the Senate. And it is a separate conversation from the one a large chunk of the country not glued to Mr. Trump’s Twitter feed is having.

“He’s not disciplined enough to focus on that,” Terry Sullivan, a longtime Republican strategist, said of a re-election-only strategy. “He needs the constant quick fix of people loving him.”

Mr. Trump, continued Mr. Sullivan, is “the Rod Stewart of politicians — he may keep coming up with new material but deep down he knows his fans just want to hear ‘Wake Up Maggie,’ so he keeps playing the same tune because he can’t stand the thought of them not loving his performance.”

With Tweets, Videos and Rhetoric, Trump Pushes Anew to Divide Americans by Race - The New York Times
Posted by John H Armwood II at 1:27 AM