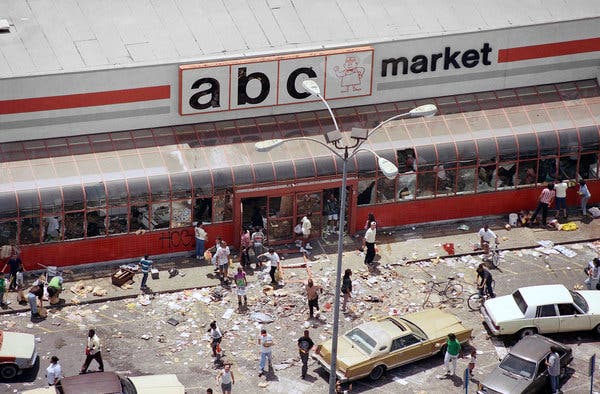 This is the most important lesson to learn from the recent protests.  It is infuriating that so many people stubbornly and ignorantly talk about looting and not about people dying.  If you are not part pf the solution you are part of the problem.

"The hackneyed emphasis on “Why loot?” obscures the question, which black people have asked for centuries.

Dr. Kelley is a professor of American history.

“Why are they looting?”

We know the answers by now: Poverty, anger, age, rage and a sense of helplessness. For some, it is a form of political violence; for others, destructive opportunism. There appears to be no single motive. That white youth figured prominently among looters during the recent wave of unrest confounds easy explanations.

Often the catalyst is economic — grabbing necessities, stealing goods to sell, snatching luxury items few can afford or retaliating against merchants thought to be exploitative. Looting is theft; it violates the law. But stealing commodities isn’t senseless. Given that we are in the worst economic downturn since the Great Depression, looting should not surprise anyone.

Ransacking a store in New York City in May during protests in response to the killing of George Floyd.Credit...Ashley Gilbertson/VII Photo.

Let me offer a more productive question instead: What is the effect of obsessing over looting?

It deflects from the core problem that brought people to the streets: The police keep killing us with impunity. Instead, once the burning and looting start, the media often shifts to the futility of “violence” as a legitimate path to justice. Crime becomes the story. Riots, we are told, cause harm by foreclosing constructive solutions. But such rebellions have not only shined a spotlight on American racism; they have also spawned investigations and limited reforms when traditional appeals have failed.

At the same time, looting has also been used as a pretext for expanding the police, which is what happened in Baltimore after the 1968 riots. By branding looters a criminal element in black communities, law enforcement officials could demand bigger budgets. And they were given a boost by President Lyndon Johnson, who increased federal funding for the police as part of his War on Poverty.

“Looter” often means “black,” as we saw in the aftermath of Hurricane Katrina when a photograph of a white couple “finding” necessities from a grocery store was compared with one of a black man whose search for similar items was deemed “looting.” Rarely do we read about the white people who looted during the Watts rebellion in 1965 and in Detroit in 1967. Indeed, white people, among them far-right provocateurs, have engaged in looting and destruction of property during the current protests; there is ample video evidence from across the country. There are also videos of black organizers asking them to stop because the police will “blame that on us.”

Our bodies were loot. The forced extraction of our labor was loot. A system of governance that suppressed our wages, relieved us of property and excluded black people from equal schools and public accommodations is a form of looting. We can speak of the looting of black property through redlining, slum clearance and more recently predatory lending.

Police departments and municipal courts engage in their own form of looting by issuing and collecting excessive fines and fees from vulnerable communities. A 2017 report by the U.S. Commission on Civil Rights found that “municipalities that rely heavily on revenue from fines and fees have a higher than average percentage of African-American and Latino populations.” And cities rely on tax revenues not only to fund the police but also to pay the ballooning costs to settle police misconduct cases. Chicago shelled out more than $100 million to settle police misconduct suits in 2018 alone.

I found it ironic that the New York Stock Exchange went silent for 8 minutes 46 seconds during George Floyd’s funeral, even though Wall Street has profited from police misconduct. Cities and counties sometimes have to issue bonds to pay out these settlements; banks collect fees for their services and investors earn interest. Some of the beneficiaries of this arrangement include Wells Fargo, Goldman Sachs and Bank of America, as well as smaller regional banks.

The hackneyed emphasis on “why loot?” obscures the critical question black people have been asking for centuries: What kind of society values property over black life? Should the theft of sneakers and computers, or shattered windows, graffiti or broken locks become our obsession when black people are being killed before our eyes, when the police are bashing the heads of protesters and tear-gassing people during a viral pandemic that can cause respiratory illness?

Philonise Floyd put it eloquently when he spoke about his brother’s killing before the House Judiciary Committee: “Is that what a black man’s worth? Twenty dollars?” The architects of Black Lives Matter have drilled down on this question since the movement’s inception during the uprisings in Ferguson, Mo., and Baltimore. As a Black Lives Matter co-founder, Opal Tometi, said in a recent interview: “I just don’t equate the loss of life and the loss of property. I can’t even hold those two in the same regard, and I think for far too long we have seen that happen.” She added, “We are really focused on how to get our demands out and stay focused on the main thing, which is people, and we want to value our love of people over property.”

The Rev. Dr. Martin Luther King Jr. understood the vexed relationship between black people and property. While his phrase that riots are the “language of the unheard” is always trotted out in times like these, he made a more powerful statement in an address to the American Psychological Association about a month after the Detroit rebellion in 1967.

“Alienated from society and knowing that this society cherishes property above people, [the looter] is shocking it by abusing property rights,” he said. The real provocateur of the riots, he argued, was white supremacy. Racism is responsible for the slum conditions that were the breeding grounds of rebellion. He added, “if the violations of law by the white man in the slums over the years were calculated and compared with the lawbreaking of a few days of riots, the hardened criminal would be the white man.”

What to do? Dr. King was unequivocal: full employment and decent housing, paid for by defunding the war in Vietnam.

Robin D. G. Kelley is a professor of American history at U.C.L.A. and the author of “Freedom Dreams: The Black Radical Imagination.”