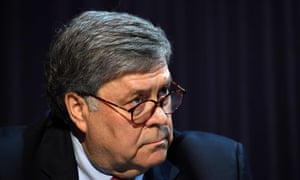 "The Department of Justice (DoJ), the agency with unmatched power to prevent discrimination at the ballot box, has been glaringly quiet when it comes to enforcing voting rights ahead of the 2020 election, former department attorneys say.

Amid concern that the attorney general, William Barr, is using the department to advance Trump’s political interests, observers say the department is failing to protect the voting rights of minority groups. While the department has been involved in a handful of cases since Donald Trump’s inauguration, it has defended voting restrictions in several of them. The department’s limited public activity has been striking, particularly as several states have seen voters wait hours in line to vote and jurisdictions are rapidly limiting in-person voting options because of the Covid-19 pandemic.

“It just seems like there’s nobody home, which is tragic,” said William Yeomans, who worked in the department’s civil rights division, which includes the voting section, for over two decades. “This is especially sad considering the plethora of voting issues crying out for action, from Georgia to Wisconsin.”

Until late May, the justice department had not filed a new case under the Voting Rights Act, the powerful 1965 law that prohibits voting discrimination, during Trump’s presidency. (In 2019, it settled a Voting Rights Act case in Michigan that was filed in the final days of the Obama administration.)

“When the top cop on the beat says, ‘You know what, I’m busy with other stuff, don’t bother me,’ that sends a message. And it’s precisely the wrong message to be sending,” said Justin Levitt, who served as a deputy assistant attorney general in DoJ’s civil rights division during the Obama administration.

The justice department provided the Guardian with a list of nearly two dozen cases and matters the voting section has been involved in since 2017. The list included several settlements with states to guarantee that military voters can get their absentee ballots. The department has also settled with several states to get them to comply with federal law to clean up voter rolls – an issue that has drawn increased attention from Republicans and conservative groups in recent years. The career attorneys in the voting section probably also have ongoing investigations that are not public.

Several former DoJ employees reviewed the list of cases at the Guardian’s request and said it did not reflect strong enforcement of voting rights laws. Yeomans noted that in all of the major litigation the department cited, the department had opposed the interests of minority voters.

“The list is an embarrassment. It documents that the voting section has abdicated its responsibility to enforce the Voting Rights Act. There is little of substance here,” he said. “This is pathetically little production for a very large section of lawyers.”

“Frankly it’s hard to see what the voting rights section is doing all day based on this list,” he said.

The justice department does not traditionally get involved in many voting cases, but it can make a big difference when it does. The department is well-resourced and, because it represents the position of the United States, carries credibility that can’t be matched by private plaintiffs. It can have leverage with local jurisdictions and judges listen when the department speaks. While advocacy groups and political parties are bringing a flood of voting rights lawsuits, there is simply “no substitute” in voting rights enforcement for the justice department, said Chiraag Bains, a former attorney in the civil rights division during the Obama administration.

“Voter suppression is rampant and DoJ’s absence is a major blow to the collective effort to save civil rights this election cycle,” said Bains, now director of legal strategies at Demos, a civil rights thinktank that frequently challenges voting restrictions. “The department should be bringing these cases themselves, or at least supporting us through amicus filings. They are nowhere to be found. It’s dereliction of duty.”

Trump has said mail-in voting is his “biggest risk” to re-election, and Barr has signaled his opposition to it. The attorney general told Fox News on Sunday that foreign nations could print fraudulent absentee ballots to disrupt the election – something election officials say would be virtually impossible.

The justice department’s silence comes at a time when the supreme court has severely curbed the tools at its disposal to prevent discriminatory voting processes. In 2013, the court struck down a key provision in the Voting Rights Act that required certain jurisdictions with a history of voting discrimination to get any voting changes approved by either the justice department or a federal court in Washington DC before they went into effect. Now the department and civil rights groups have to proactively bring suits to stop discriminatory voting laws.

Following that 2013 decision, Barack Obama’s justice department got involved in three major voting rights lawsuits – two in Texas, one in North Carolina – meant as a signal the department was going to continue to try and aggressively enforce what was left of the Voting Rights Act. The Trump administration has not undertaken any similar kind of major enforcement action.

“My impression is that they’re not enforcing the Voting Rights Act,” Yeomans said. “That’s the thing about the civil rights division all around. It’s a plaintiffs’ institution. It’s a proactive institution. And so, the way to make it ineffective is simply not to do anything.”

In some of the major cases where it has been active, the agency reversed its position from the Obama administration to take a new posture backing voting restrictions.

Weeks after Trump took office, the justice department announced it was ending a longstanding legal claim that Texas’ voter ID law – one of the strictest in the country at the time – was passed with discriminatory intent. Months later, the department flipped sides in a different closely-watched case, dropping its opposition to an Ohio law that allowed the state to aggressively remove voters from the rolls and argued in support of Ohio at the supreme court. In 2013, the justice department argued Texas should be put under federal supervision after being found to have intentionally discriminated against voters during redistricting so that it wouldn’t do it again. But last year, it reversed its position.

In all three of the cases, the briefs explaining the reversals were not signed by career attorneys at the department – a strong signal they did not agree with its contents. “The reversals in Texas voter ID and redistricting should be scandalous,” said Levitt, who worked on the cases in the Obama administration.

For decades the department had a reputation for relatively consistent enforcement of voting rights laws. Even during the administration of George W Bush, when the civil rights division was rocked by a political hiring scandal, the voting section filed several cases under a provision of the Voting Rights Act that guarantees access to the ballot for non-english speakers, said James Peyton McCrary, a historian who worked in the voting section from 1990 until 2016.

“The Department of Justice has a longstanding reputation for enforcing the Voting Rights Act and not playing politics with it,” said Gerry Hebert, a voting rights attorney at the Campaign Legal Center who worked at the department for over two decades. “Those of us who have been in private practice or nonprofit organizations often welcomed the participation of the Department of Justice because they not only have the honest broker reputation, but courts respected their views because of their vast experience.”

More recently, there have been some encouraging enforcement signs from the department. In the late May decision, it announced a settlement under the Voting Rights Act with a South Dakota school district. The district agreed to change the way it was electing candidates to the school board after the justice department argued the current system was discriminatory against the district’s sizable Native American population. The department also announced a settlement in Arkansas in early May under a different federal law that will make it easier there for residents to update their voter registration.

Samberg-Champion also saw a silver lining in a recent case in South Carolina where the justice department filed a brief arguing that South Carolina’s witness requirement for absentee ballots did not violate the Voting Rights Act. He noted that while the DoJ had weighed in on a particularly narrow issue in the case, it had chosen not to weigh in on the other arguments challenging the law in the case.

“That’s a small victory, but I think it’s important – especially because I imagine the judge couldn’t help but notice the DoJ’s abstention from the other claims and draw some inferences from that regarding their merits,” he said.

“I actually think it may be to the public’s benefit if they stay out of high-profile cases, given the track record of this administration,” Bains said.

As the election nears, Yeomans said he was concerned Barr would use the department to ramp up prosecutions for non-citizens and other ineligible voters the civil rights division remained quiet.

“You can bet before the election they’re going to have the US attorneys offices fired up and have everyone all ready to go,” he said. “That has the potential for intimidation, particularly when there’s no counterbalance.”