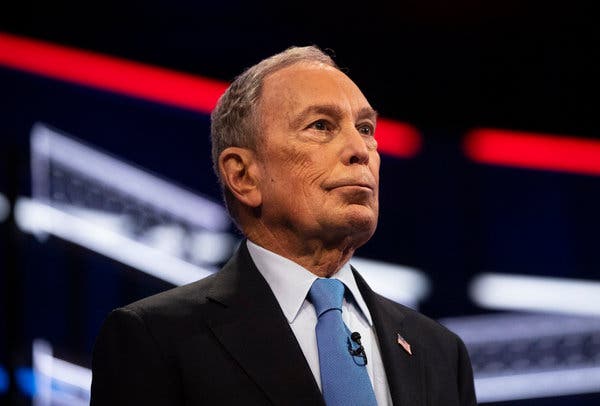 He presents a rosy picture of his time as New York’s mayor. But for black people, it was a horror.

I know that Michael Bloomberg isn’t on the primary ballot in South Carolina, but he was on the debate stage there. And he was using it to talk beyond the state to the swarm of states that will vote on Super Tuesday, states in which he has spent an absolutely obscene amount of money on ads that amount to propaganda.

In South Carolina he painted a sunny picture of success governing a diverse city. But the reality was far from what he made it seem. For black people in particular, Bloomberg’s mayoralty was more thorns than roses.

Super Tuesday voters, particularly black ones, this takedown is for you.

It was an absolute outrage to hear Bloomberg call for the decriminalization of marijuana and the expunging of criminal records for those caught with small amounts of the drug.

As the Drug Policy Alliance pointed out in 2012: “In the last decade since Michael Bloomberg became mayor, the NYPD has made 400,038 lowest level marijuana possession arrests at a cost of $600 million. Nearly 350,000 of the marijuana possession arrests made under Bloomberg are of overwhelmingly young Black and Latino men, despite the fact that young whites use marijuana at higher rates than young Blacks and Latinos.”

In addition, as the professor Harry Levine of Queens College put it in the report, every year, the Police Department was “stopping and frisking more than a half million mostly young black and Latino men and falsely charging them with marijuana possession in public view.”

As the alliance pointed out: “Getting arrested for marijuana is no small matter — not least because it creates a permanent criminal record that can easily be found on the Internet by employers, landlords, schools, credit agencies, licensing boards and banks.”

Bloomberg also boasted about what he accomplished on the educational front, particularly for blacks and Hispanics. After taking over more control of the schools, for instance, he instituted a school choice system that allowed eighth graders to apply to any school in the city.

But by that time, many black students had already been so underserved that they got no advantage from it.

As The New York Times editorial board put it in 2017:

“The choice system was constructed not for the poor, but to keep white middle-class families invested in the public schools. Even some who supported the strategy 20 years ago, though, now recognize that it promotes class segregation and presents enormous obstacles to vulnerable families.”

Students of color experienced a different city: Bloomberg wants to brag about his educational accomplishments for these children, but he vastly overstates them. And in their days after school, he conducted a terror campaign that destroyed the lives of many young people of color.

Bloomberg also bragged about the number of affordable housing units he created. But the fact is that he let the developers run roughshod over the city, when, as Politico recently reported: “A report released as his third term was winding down placed nearly half the city’s residents at or near the poverty line. Under his rule, the city’s homeless population swelled and public housing conditions deteriorated.”

Bloomberg was mayor of New York from 2002 to 2013. That encompassed almost the entire census decade between 2000 and 2010. That last census, in 2010, was the first since Reconstruction in which the number of African-Americans in the city fell.

I have called what Bloomberg did a public policy form of ethnic cleansing of New York, and I stand by that characterization.

For so many black New Yorkers, Bloomberg made the city not better for them but inhospitable to them.

As the city made itself more attractive to young white people, it made itself less attractive to young black ones. As Reniqua Allen wrote in 2017 in The New York Times, a report issued the year before by the New York City comptroller, Scott Stringer, “found that between 2000 and 2014 about 61 percent of millennials moving to New York were white, while only 9 percent of 18- to 29-year olds moving into the city were black.”

Bloomberg wanted to run a data-driven administration. He may love data, but he lacks empathy. He sees patterns in numbers but not humanity in people. As such, real people get injured in these greater-than, less-than factorings.

He wanted to model the city on his business, but stockholder responsibility and civic responsibility are not the same thing. In business, you hire only the people you want and can fire those who can’t or wont live up to your expectations and idea of performance. Civil responsibility is different. You must find a way to help encourage and better the lives of even the least productive. They can’t simply be removed.

But gentrification, housing scarcity, economic outpacing and police pressure can perform this precise purchase: replace the struggling in a city with those most likely to prosper.

Sure there were some retirees moving south, but there was also an extraordinary number of young black people pushed out or pressured out.

Lastly, people often ask about something Bloomberg touts: How could he have been so bad and still been elected to three terms as mayor?

This may sound familiar: He was able to exponentially outspend his opponents. But it was more complicated than that: He was a less brash version of his predecessor Rudy Giuliani (also sound familiar?), although he had some of the same instincts.

He also ran for his first term shortly after Sept. 11, when the city was reeling emotionally and its economy was suffering. Having a technocratic businessman at the helm of a city so dependent on Wall Street didn’t seem like a stretch. It actually seemed safe. As the city recovered and regained a sense of itself, much of the credit for that rebounded to Bloomberg. He was able to ride that election also in part because his opponents were so weak.

And as stop-and-frisk continued to aggressively expand over the years, two things were true: For people outside of the targeted areas, the practice was virtually invisible to them, and for many aware and upset about it, much of the anger was directed at the police and not the mayor. This was a campaign conducted in the dark against the dark, a system in which officers on patrol were blamed, not necessarily the politicians.

I wrote my first column involving stop-and-frisk in 2009, and it didn’t even mention Bloomberg. I too assumed that this was a police policy gone awry. I continued to write about it, but it wasn’t until 2011 that I mentioned him, and even then I didn’t directly blame him for the policy.

That is because it wasn’t until the last few years of his mayoralty that Bloomberg himself began to give public, full-throated defenses of stop-and-frisk, like the speech he gave in 2012 at a Brooklyn church as a court case against the city loomed.

Then it was abundantly clear: This wasn’t a practice being perpetrated by rogue cops; it was a dictate coming from the top, from Bloomberg himself. Simply put, Bloomberg escaped much of the blame for stop-and-frisk during his mayoralty, because he never stepped forth to accept it. He hid behind the police department and let it take all the arrows.

This is why the Patrolmen’s Benevolent Association president, Patrick Lynch, blasted Bloomberg in November when he cynically apologized so that he could run for president. As Lynch put it:

“Mayor Bloomberg could have saved himself this apology if he had just listened to the police officers on the street. We said in the early 2000s that the quota-driven emphasis on street stops was polluting the relationship between cops and our communities. His administration’s misguided policy inspired an anti-police movement that has made cops the target of hatred and violence, and stripped away many of the tools we had used to keep New Yorkers safe. The apology is too little, too late.”

That is the problem with having a leader so slavishly devoted to data: The underlings will seek numbers rather than justice to satisfy him.

The attorney played a recording and asked who Serrano’s supervisor was referring to when he said go out and arrest the right people at the right place and the right time. Serrano answered, “He specifically said blacks, black males between 14 and 21.”

Bloomberg wants to claim sole credit for reducing New York’s violent crime rate, particularly in minority neighborhoods, even though it was already beginning to fall before he entered office and continued to fall once his racist stop-and-frisk policy was curtailed. This is the paternalistic white savior syndrome operational in the man. It is ego. It robs minority communities of agency and activism. It says that those communities are doomed to perpetual darkness without outside pressure and correction. It’s outrageously offensive.

But that’s no shield at all. The black political establishment is still an establishment, and it is just as susceptible as any other power and pressure. As James Baldwin once put it, “The terrible thing, and here we have an American phenomenon in relief, is the fact that the Negro representative, by virtue of his position, is ever more removed from the people he ostensibly serves.”

These people will walk over the frisked bodies of our children to repay a Bloomberg favor or in anticipation of one.

There is nothing Bloomberg can do or say, or have black surrogates do or say on his behalf, that will wash his hands clean.

Michael Bloomberg threw black New Yorkers against a wall and treated them like the undeserving and undesirable. Super Tuesday voters should return the favor."