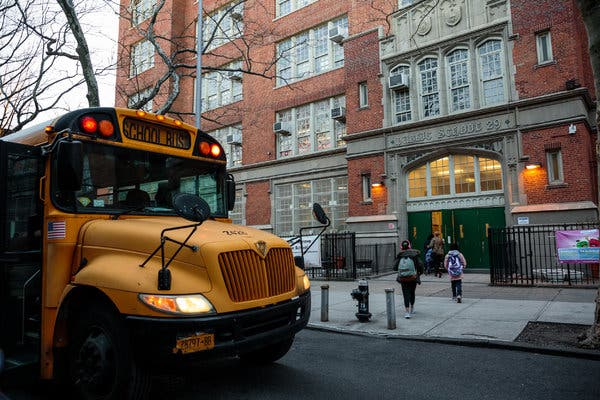 "What happens when working people are so vulnerable — without decent health care, child care and other forms of support — that it puts the whole city at risk?

Mayor Bill de Blasio went into the weekend, and then through most of it, arguing that the harm to the city of closing its public schools outweighed the benefit to be gained in slowing the spread of the coronavirus. Then, on Sunday evening, the mayor announced that, as of Monday morning, he was closing the schools.

What happened? Politically, the mayor’s position was becoming untenable as teachers, fearful for their students and their own health, threatened to walk off the job, and their union said it would sue the city.

Then on Sunday the city’s health care workers union, which had opposed closing the schools, reversed its position. The union struck a deal with the teachers and the city to turn schools into child care centers for students whose parents are deemed to be in essential jobs, like health care roles.

Until Sunday, Gov. Andrew Cuomo had also opposed closing the schools, out of fear that health care workers would have to stay home to care for their children. That outcome averted, he announced his own reversal by mid-Sunday afternoon, putting more pressure on the mayor.

Whether to close the schools was never an easy call. It was a less obvious choice, either way, than advocates on either side at times made it sound. At least nine states, including Florida, Virginia, Michigan and Ohio, had already closed their schools. Los Angeles has shut its system, the country’s second largest after New York’s.

Yet the Centers for Disease Control and Prevention has cast doubt on the benefit of short- to medium-term school closings. It has advised that available modeling suggests that even long-term closings, of two to five months, matter less than steps like hand-washing for everyone and home isolation for those who test positive. “In other countries,” it noted, “those places who closed school (e.g., Hong Kong) have not had more success in reducing spread than those that did not (e.g., Singapore).”

It will be harder to monitor students’ health when they no longer attend school. Middle- and high-school students, freed from classes, seem unlikely to choose to isolate themselves to avoid the possibility of infection. It’s asking an awful lot of adolescents to expect them to embrace, rather than fear, social distancing.

Further, nearly one million households in the city don’t have internet access, making online learning difficult. Because officials expect the virus to remain a danger for months, Mr. de Blasio said Friday that closing the schools would make it difficult to reopen them before September, a scenario that could leave tens of thousands of vulnerable children not only without an education, but without a safe place to go.

All that said, there are very strong reasons to close the schools, particularly given the federal government’s contemptible failure to rapidly provide testing to track the paths of the virus. The absence of such vital information, and the evidently rapid spread of the virus, argue for the most drastic of measures to save as many lives as possible.

New York is not ready for this abrupt move, however. Rather than shift immediately to some form of online learning, the schools have simply canceled classes until Friday. And great care must now be taken in the creation of the new centers to feed and care for students. As Mr. de Blasio himself was arguing as recently as Saturday, creating such new centers could simply replicate some of the density of the schools and establish new pathways for the virus to spread.

Of the more than one million students in New York’s roughly 1,700 schools, about 750,000 live at or below the poverty line. These children count on meals and critical services from the schools. About one in every 10 students is homeless.

New Yorkers should pause to absorb one important insight from the fact that the mayor and governor regarded the public schools as, essentially, the vital day care center for city workers: New York’s schools are a critical support network for the city’s children, and those children’s parents are a critical support network for the city. This is both a tribute to the importance of the school system and to the hard-working New Yorkers who hold the city together, and a jarring indictment of how little support these New Yorkers receive in turn.

That is a lesson for wealthier New Yorkers in particular to consider as they work from home in the weeks ahead, perhaps ordering groceries to be delivered, counting on the hospital to be open should they need it: A system that has left the working poor so vulnerable — without decent health care, child care and other forms of support — turns out to have created tremendous vulnerability for the society as a whole.

Like health care workers, transit employees, police officers, firefighters, E.M.S. employees, sanitation workers and other essential employees also have children in the public schools. Others, including low-wage workers who live paycheck to paycheck in the service industries, could not only be forced to stay home now to care for their children, but could lose their jobs as a result. Mr. Cuomo noted on Friday that, to that point, the schools that had closed in the state had been in relatively wealthy areas; many New Yorkers have fewer alternatives when it comes to child care.

We are all vulnerable to this virus, and that means we are all in this together. It poses a greater risk to some: the elderly, the sick and the poor, and they are particularly deserving of care and compassion. But the city is also asking its health care workers, first responders and others to work at the front lines of the contagion. It shouldn’t — perhaps it doesn’t — take a crisis like this to remind us all of how much we count on them, but this is certainly a moment for all New York to recognize their heroism and do whatever it can to support them in their work."