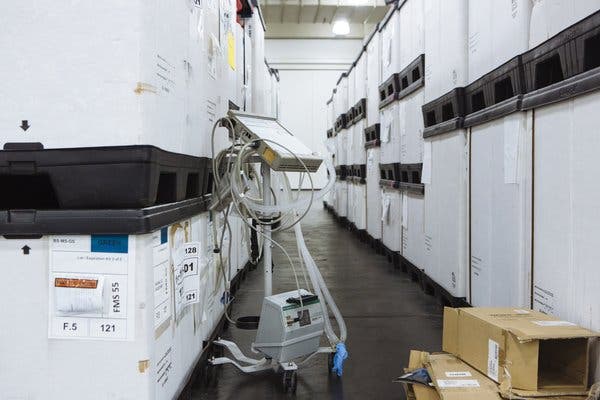 "President Trump wants the private sector to fill the urgent need for the lifesaving devices. Experts say that strategy may doom the thousands who will need them in the coming weeks.

A lone ventilator at the Jacob K. Javits Convention Center on Monday in New York, which will be converted into a 1,000-bed hospital.

As hospitals prepare for a flood of desperately ill patients unable to breathe on their own, mechanical ventilators have become the single most important piece of equipment that can mean the difference between life and death.

Now, with American hospitals facing a grave shortage of the vital devices, the Big Three automakers, small engineering firms, software designers and medical equipment manufacturers are rushing to figure out ways to produce more of them. But President Trump has so far declined to use powers that public health experts say could make a real difference in getting more ventilators to places that need them the most — right now.

What is really needed, a number of public health experts and former government officials say, is for Washington to take control of the nation’s existing ventilator supply. Because peak coronavirus infections will hit cities and regions at different times in the coming months, a centralized federal effort could send unused machines to hospitals that need them most.

“This is a national crisis,” said Frank Kendall, who served as under secretary of defense for acquisition and logistics in the Obama administration. “In a time of scarcity, you can’t leave it up to companies and governors to manage it themselves.”

Mr. Kendall said that only the federal government had the authority to take over the allocation of ventilators, both from manufacturers who are in the business of selling devices to the highest bidder, and state leaders unlikely to voluntarily let go of machines they fear they might need in the future.

“As the states become more desperate, someone has to referee the situation,” he said. “The marketplace isn’t set up to do that.”

The United States currently has between 160,000 and 200,000 ventilators, but could need up to a million machines over the course of the outbreak, according to the Society of Critical Care Medicine. In New York, the epicenter of the outbreak in the U.S., hospitals are already on the verge of running out, Gov. Andrew Cuomo said this week.

Mr. Trump’s solution has been to push the private sector to voluntarily address the shortage. In a Twitter post on Sunday, he encouraged the big car companies to jump in to help make ventilators, and General Motors and Ford responded with announcements that they would partner with medical device companies to produce the machines.

But military experts say Mr. Trump could also tap the logistical prowess of the Pentagon and the legion of defense contractors primed to quickly solve complex challenges. The federal government could address problems in the global supply chain that are depriving ventilator companies of the components they need to increase production.

Other, quicker options are being explored around the country, including stepping up production of the type of resuscitators used by paramedics and repurposing simpler ventilators used by plastic surgeons and elective surgery centers.

G.M. said this week that it would partner with the ventilator company Ventec Life Systems to produce up to 200,000 machines. Ford said it would help 3M and GE Healthcare increase production of respiratory machines they already make. And Medtronic, one of the world’s largest medical device makers, is in talks with Tesla and other car companies, including General Motors and Ford.

“This is not a business model problem,” said Vafa Jamali, a senior vice president at Medtronic. “This is a society problem.”

But the fruits of these partnerships will not arrive in time to save the thousands of patients who will need the machines in the coming weeks. Ventec’s timetable for increasing production fivefold, for example, is three months.

Besides the slow timetable, experts on medical devices questioned the wisdom of bringing in an unrelated industry like the automakers to manufacture a sophisticated medical device.

“It’s not like making a sedan or S.U.V.,” said Dr. Hugh Cassiere, a pulmonologist who sits on a Food and Drug Administration panel for anesthesia and respiratory devices.

“Sounds good as a sound bite, but the practicalities may be very difficult,” added Dr. Cassiere, who is helping oversee care for more than 40 severely ill coronavirus patients on ventilators at North Shore University Hospital on Long Island.

Experts in the field say there are other ways to rapidly boost the ventilator supply for overwhelmed hospitals. Most ventilators are sophisticated machines that keep critically ill people alive by delivering oxygen into the lungs through a tube inserted in the windpipe. Full-feature machines can cost as much as $50,000, but doctors say even basic models that cost less than $2,000 can sustain a patient in acute respiratory distress. The most grievously ill may need to remain on the machines for weeks until they can breathe on their own.

There are tens of thousands of no-frills resuscitators used by paramedics and the military. Plastic surgeons and outpatient surgery centers also have ventilators in their offices. With elective procedures indefinitely on hold in much of the country, those machines are now sitting idle.

“I think it will be faster to throw a couple ventilators on a truck and drive them to a hospital than wait for new ones to arrive,” said Dr. Adam Rubinstein, a plastic surgeon in Miami who has been compiling a list of doctors willing to loan out their ventilators in a pinch. “So far, no one has said no.”

In recent days, mechanical engineers and software designers across the country have been crowdsourcing plans for simple ventilators that could be made with 3-D printers and components readily available at hardware stores. Hospitals have been pulling old machines out of storage and requisitioning ventilators that anesthesiologists use during surgery.

Larry Kronick, the president of PMT Partners, a Florida company that sells a simple breathing machine already used by the military and ambulance crews, said he had 1,000 of his Oxylator respirators ready to go, but buyers have been scarce.

Eric Honroth, the North America president for Getinge, a Swedish company that makes 10,000 ventilators annually, said he would welcome government intervention to solve supply-chain bottlenecks for components, but that production would be better left to companies with expertise in the field.

“These are complex machines that require complicated technology to keep patients alive,” he said. “I would have some trepidation and reticence about someone else trying to manufacture what we do. It’s not like we’re manufacturing masks.”

Then there is the issue of who will run the new devices. Dr. Mahshid Abir, an emergency physician at University of Michigan, said most ventilators require specialized training to operate. With so many health care workers falling ill, there is an additional staffing challenge: patients tethered to breathing machines need to be monitored 24 hours a day. The New England Journal of Medicine estimates that there are only enough respiratory therapists to care for 100,000 patients at one time.

“You can’t just put someone on it and press start and you’re done with it,” Dr. Abir said. “There’s a lot of adjustments that need to be made, depending on how sick a patient is. Even if we got an indefinite number of ventilators, we don’t have an unlimited number of people to operate them.”

In the meantime, G.M. and Ventec have been “working around the clock” on plans to make ventilators at a small electronics plant the car company owns in Kokomo, Ind., a G.M. spokesman said in a statement.

Over the weekend, the automaker began reaching out to its network of suppliers to find companies that can produce parts for Ventec’s machines. By Monday morning, G.M. had found sources for more than 90 percent of the required parts, but was still looking for producers who could supply the remaining components, the statement said.

The two companies are trying to work out a deal in which G.M. would essentially serve as a contract manufacturer, according to a person familiar with the discussions who was not authorized to discuss them. While the companies are working as quickly as possible, it could take four or more weeks for production to start, the person said

But Dr. James DuCanto, an anesthesiologist in Milwaukee, says relying too heavily on car companies to produce ventilators would be irresponsible. Facing a surge of desperately sick patients, many hospitals have been dusting off triage plans for rationing ventilators that require doctors to make excruciating decisions about which patients would get them if there aren’t enough.

Dr. DuCanto often uses the portable Oxylator breathing machine for patients who need short-term breathing assistance and he said they could provide a much faster solution. The machines, which cost $2,000, could be pivotal in sustaining scores of coronavirus patients in a crisis, he said. The only thing they need to function is an oxygen tank.

“These things absolutely save lives,” he said.

The devices are so simple, he said, that machine shops across the country could be enlisted to produce the components.

“It would be easy peasy to make them,” he said. “During a national crisis, there’s no need to reinvent the wheel.”