The NFL is a microcosm of America. Brian Flores’ lawsuit is a reminder of that | Pamela Newkirk | The Guardian

The NFL is a microcosm of America. Brian Flores’ lawsuit is a reminder of that | Pamela Newkirk | The Guardian 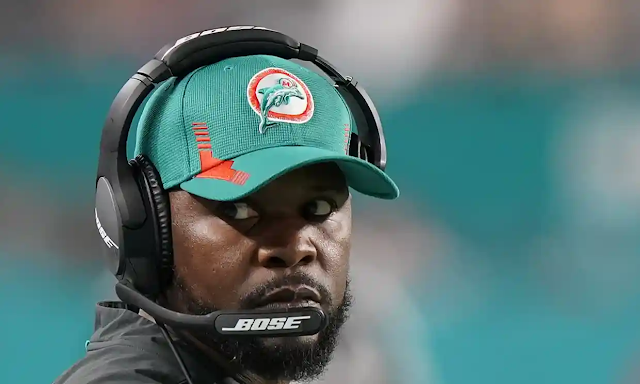 "While former Miami Dolphin Coach Brian Flores’ lawsuits against the NFLdominate the news, his story is an old one that’s as American as football.

The former coach’s allegations of league-wide racial discrimination and team interviews with minority candidates conducted in bad faith, sets the NFL’s nearly 20-year-old Rooney Rule – which was adopted in 2002 to address the virtual exclusion of minorities from leadership roles – in stark relief. The rule requires teams to interview minority candidates for coaching and other front-office jobs. However, in the nearly 20 years since the rule was conceived, the number of Black head coaches increased from one in a single season to a high of eight in 2011, but today again stands at one.

Such is the history of a league, and a country, for which two steps forward and two steps back, is a well-choreographed dance. It evokes the short-lived racial progress during Reconstruction following the civil war, and then the century-long backlash in the form of lynching, voter suppression through literacy tests and poll taxes and other flagrantly discriminatory laws targeting Blacks.

The same fits and starts continue to zigzag through history, seen more recently in the election of Barack Obama followed by the rise of Donald Trump and white nationalism and current efforts to curtail the minority vote and the teaching of the nation’s fraught racial history.

The NFL is merely a microcosm of America.

“Victories are hard won and defeats happen overnight,” says Cyrus Mehri, the civil rights lawyer who in 2002, along with the late Johnnie Cochran, conceived the Rooney Rule after back-to-back firings of two Black coaches with winning records. The coaches, Dennis Green of the Minnesota Vikings and Tony Dungy of the Tampa Bay Buccaneers, had been among the five African American head coaches in the league’s entire 80-year history. Their firings – the second reported on the Martin Luther King holiday in 2002 – inspired the lawyers to commission a study of the win and loss records of NFL coaches by race over the course of 15 years.

Their report, Black Coaches in the National Football League: Superior Performance, Inferior Opportunities, found that year after year qualified Blacks were overlooked for coaching opportunities and that the handful who were hired were more likely to inherit underachieving teams. Black coaches were also more likely to be fired than white coaches with inferior records. The numbers revealed that Black coaches, on average, won more games per season and led their teams to the playoffs 67% of the time, compared with 39% for white coaches.

“The cruel counterpart to the superior performance of black coaches in the NFL is inferior hiring opportunities,” it said.

The report findings in a league whose players were nearly 70% Black, but that had not hired its first Black coach until 1989, were hard to ignore. In December 2002, the league’s 32 teams, led by the Pittsburgh Steelers president, Dan Rooney, unanimously adopted a rule requiring the consideration of minorities for leadership roles.

The so-called Rooney Rule initially held promise and was credited with moving the needle in a league long resistant to change. But nearly two decades later hope for many has faded to disillusionment.

Although many critics say the Rooney Rule has failed diversity, Mehri believes the NFL has failed the rule by neglecting to consistently enforce it. In 2003 the NFL initially signaled to teams that the rule was to be taken seriously when it levied a $200,000 fine – the largest in NFL history – against the Detroit Lions for hiring a white coach without interviewing minority candidates. But over time, suspicions of sham interviews of minority candidates mounted, culminating in 2018 when Mehri says the Oakland Raiders’ flagrant violation of the rule went unpunished – causing one of its pillars to collapse. The NFL denied the rule had been violated but agreed to close some of the loopholes by requiring teams to only interview minority candidates with the requisite experience for the job. Mehri still sees the league’s failure to enforce in 2018 as a turning point.

“It was a missed opportunity,” insists Mehri. “You either enforce it or you destroy it.”

History shows that the effectiveness of any measure aimed at racial progress is commensurate with demonstrated commitment to the cause. And without leadership, oversight, and enforcement any hard-won gains can be swiftly erased.

The NFL is a microcosm of America. Brian Flores’ lawsuit is a reminder of that | Pamela Newkirk | The Guardian
Posted by John H Armwood II at 9:14 PM