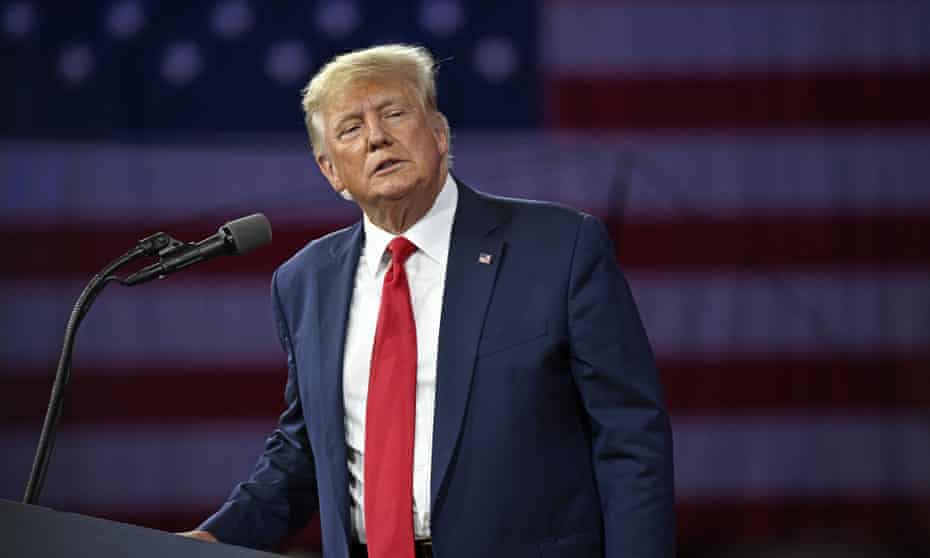 Donald Trump, the former US president, has defended his description of Russia’s Vladimir Putin as “smart” while seeking to blunt accusations that he admires the invasion of Ukraine.

Trump reiterated his false claim that the 2020 election was stolen by voter fraud as he argued that the invasion of Ukraine would never have happened if he was still in the White House.

“The Russian attack on Ukraine is appalling,” he told the Conservative Political Action Conference (CPAC) in Orlando, Florida, on Saturday night. “It’s an outrage and an atrocity that should never have been allowed to occur.

“We are praying for the proud people of Ukraine. God bless them all. As everyone understands, this horrific disaster would never have happened if our election was not rigged and if I was the president.”

Election officials, numerous judges and Trump’s own attorney general found no evidence that the election was rigged. Having retold “the big lie”, he went on to compare himself favourably with other presidents’ handling of Putin.

“Under Bush, Russia invaded Georgia. Under Obama, Russia took Crimea. Under Biden, Russia invaded Ukraine. I stand as the only president of the 21st century on whose watch Russia did not invade another country.”

Democrats dismissed the speech and condemned Trump for still cosying up to Putin. Adonna Biel, a spokesperson for the Democratic National Committee, said: “After spending four years selling out Ukraine, the defeated former president took the stage at CPAC to double down on his shameless praise for Putin as innocent Ukrainians shelter from bombs and missiles at the hands of Russia.

“This has been the theme of the Republican party all week, making clear that their party is beholden to a defeated former president who lost them the White House, House, and Senate.”

An audience of about 5,000 people at CPAC, the biggest annual gathering of grassroots conservatives, roared and whistled their approval. Some chanted: “USA! USA!”

Trump, whose “America first” approach rattled Nato allies, claimed that Russia and other countries respected the US when he was president and blamed Joe Biden for displaying weakness on the global stage.

“I have no doubt that President Putin made his decision to ruthlessly attack Ukraine only after watching the pathetic withdrawal from Afghanistan, where the military was taken out first, our soldiers were killed and American hostages, plus $85bn worth of the finest equipment anywhere in the world were left behind,” he said.

Trump, who notoriously deferred to autocrats, also responded to criticism over his description this week of Putin’s invasion of separatist areas of Ukraine as “genius”, “savvy” and “smart”.

He asserted that Putin has suffered no repercussions beyond sanctions, which he has shrugged off for 25 years. “The problem is not that Putin is smart – which of course, he’s smart – but the real problem is that our leaders are dumb. They’ve so far allowed him to get away with this travesty and an assault on humanity.”

He added: “So sad. Putin is playing Biden like a drum and it’s not a pretty thing as somebody that loves our country to watch.”

Trump’s 2016 presidential campaign had more than 100 contacts with Russia, prompting a special counsel investigation that stopped short of alleging direct collusion. As president, Trump was notoriously reluctant to condemn Putin and, at a summit in Helsinki, took the Russian leader’s word over that of his own intelligence agencies. His administration did impose some sanctions on Moscow, however.

Trump recalled on Saturday: “I was with Putin a lot. I spent a lot of time with him. I got along with him … I did a lot of things that were very tough on Russia. No president was ever as tough on Russia as I was.

“But with respect to what’s going on now, it would have been so easy for me to stop this travesty from happening. He understood me and he understood that I didn’t play games. This would not have happened. Someday, I’ll tell you exactly what we talked about. And he did have an affinity, there’s no question about it, for Ukraine. I said, never let it happen, better not let it happen.”

He added: “I also warned Nato about the danger of Russia and look at the consequences. On foreign policy, the world rightly had a healthy fear that as president I would stand strong for Americans’ priorities.”

During an 85-minute speech to a packed ballroom at CPAC, Trump, who contested the 2016 and 2020 elections, also gave his strongest hint yet that he will run for president in 2024. “We did it twice, and we’ll do it again,” he said. “We’re going to be doing it again a third time.”

There were loud cheers from the crowd, many of whom wore “Make America great again” caps and “Trump 2024” regalia. There were shouts of “Four more years!” and “We want Trump!”

The former president went on to rail against “leftwing tyranny” and “crackdowns, censorship and cancel culture”, praise protesting Canadian truckers and brand Biden’s supreme court nominee, Ketanji Brown Jackson, “a radical left zealot”. He claimed that the court’s existing justices, including conservative Brett Kavanaugh, are “terrified of the radical left” and “afraid to do the right thing”.

Trump pushed the baseless conspiracy theory that his 2016 election rival, “Crooked” Hillary Clinton, spied on him, prompting chants of “Lock her up!” And he accused Democrats of caring more about Ukraine’s borders than America’s own.

He declared: “You could take the five worst presidents in American history and put them together and they would not do the damage that Joe Biden’s administration has done in just a very short period.”