Opinion | Who Should Be Embarrassed? - The New York Times 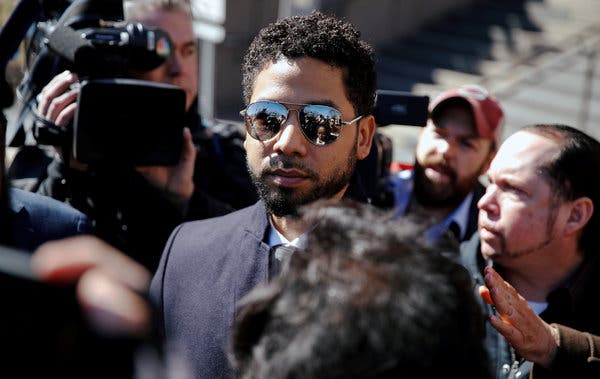 If Jussie Smollett’s racists were imaginary, then conservatives can argue the racists we all see are imaginary.

Jussie Smollett leaving court on Tuesday after charges against him were dropped by state prosecutors in Chicago.

“FBI & DOJ to review the outrageous Jussie Smollett case in Chicago. It is an embarrassment to our Nation!” With that tweet, Donald Trump took the absurdity of America’s obsession with a trivial crime and entertainment story and heightened it.

But it was just the kind of story that he and conservatives love, one that mixes race, criminality and culture. They need desperately to find emblems of minority pathology to justify their calloused, draconian approach to minority issues.

The Hate Crime Hoaxer, the Mexican Rapist, the America-Hating Muslim, the AIDS-Infected Haitian: each of these ideas has a particular serviceability. In their minds, I believe these archetypes work to invalidate criticism and to inoculate them from accountability.

For the record, if Smollett did what he is accused of having done, it was not only wrong, but also stupid.

But I also believe that the case is little more than tabloid fodder that the media, spurred by wails from conservatives and always so desperately insecure about being accused of liberal bias, has pumped up and stretched out. Everyone is trying to make this case bigger than it is and to mean more than it does.

At its core, it’s just a story about an alleged lie told by a cable television actor. It is a story about an alleged hate crime that didn’t happen, but that was staged by Smollett. The police diverted quite a few resources to investigate his claim, then came to the conclusion that the event was a hoax. Finally, the case was dropped before a trial and the records were sealed.

It is interesting Hollywood drama, but meaningless in the grand scheme of things. Smollett was charged with making false reports — lying. If the police are correct, there was no assault or death. There was no property damage. There was no theft.

The major damage was the damage Smollett did to his own career and reputation.

Diverting resources that could be used to investigate actual assaults and murders is a big deal, but if the police and prosecutors believed he did this, then they should have financial restitution as part of a plea deal.

It is an ugly truth that money and power make a mockery of our justice system. Some people sit in jails for weeks, months or even years waiting for a trial because they can’t afford bail. Others pay up and go home immediately. Some people must use overworked public defenders. Others can afford high-powered legal teams. Some people are not shown preferential treatment. Others are.

Often, the people most injured by the negative impacts of this corrupt system are the poor, black and brown.

But in this case, Smollett, a black man, was the one with the wealth and the power. Prosecutors cut him a break that I don’t think they would have cut for the poor and the powerless.

None of this is of any real consequence beyond the local authorities and Smollett himself. And yet, more than two whole months after the precipitating event, people are still trying to make Smollett the embodiment of race problems in America. The dimwits at “Fox & Friends”went so far as to say the case, if it had been true, had the potential to ignite “race riots in major cities across this country.”

Others bemoaned the horrible impact the case would have on other hate crime victims being believed.

As a theory, that certainly sounds plausible, but where are the data to support such a claim? Smollett didn’t invent incredulity about vulnerable people and crime, so neither is he likely to significantly alter it.

I believe a bigger problem than people not being believed is that they are believed, but no one cares what happened to them.

Even the media is far more interested in the hoax angle to this story than they ever were about the alleged hate crime.

As Phillip Bump wrote in The Washington Post in February, the debunking of Smollett’s claim had gotten far more coverage than the initial claim.

Folks, what you are seeing is a media being bullied into bending over backward to placate the people who endlessly accuse them of bias. I believe you are also seeing an expression of subconscious race bias in the media itself that truly registers sensation at the thought of this black man’s deception.

Smollett’s greatest offense in this regard was not lying, if indeed he did, but lying about white people who support a racist in the White House.

Conservatives need this Smollett story to have legs. If Smollett’s racists were imaginary, then they can argue the racists we all see are imaginary.

They can paint our condemnation of the white supremacy we see resurging all around us as mere callous manipulation, which is the accusation against Smollett.

The fact that the media is still obsessing about this story two months in and being used by people who want to push a narrative that Smollett damaged race relations, rather than acknowledging that race relations have already been ripped to shreds in the Trump era, is the real embarrassment."

Opinion | Who Should Be Embarrassed? - The New York Times
Posted by John H Armwood II at 9:05 AM