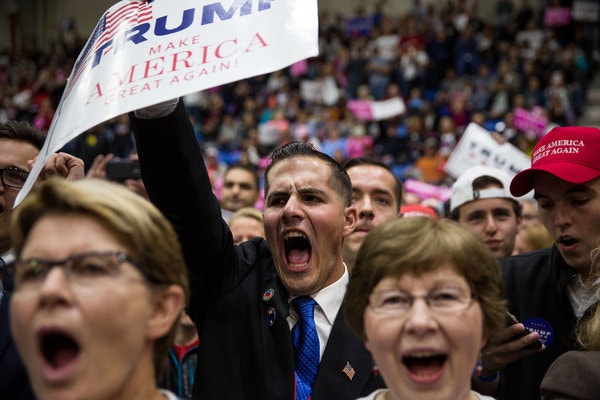 "In 1989, NBC News did a special on race in America, in which it interviewed a young Donald Trump, who was then a couple of years younger than I am now.

I was a second-year college student at the time, striving, I guess, to become one of those “well-educated blacks,” completely unaware that the man who just months earlier had taken out full-page ads in New York City newspapers demanding the death penalty for the Central Park Five was pretending to covet my burgeoning position in society.

But of course, Trump was incredulous of his own comment, notable from the way he began to smirk as he mouthed the words “I would love to be a well-educated black.” It wasn’t sincerity but sarcasm. It was a way of making a point, not about jealousy but about resentment. It was a way of damning with faint praise the idea that the inviolable dominance of white male privilege in America was entering a period in which not every shred of advantage would redound to white men, even if a vast majority still did.

Trump was attempting to express a white male anger and anxiety as made-for-television profundity and witticism. It would in many ways foretell a strategy that worked well for him decades later when he ran for president.

Trump’s ability to completely embody and effectively project the petrifying fear young white men feel about the erosion of their privilege is a large part of the reason he is president today.

A new study published this week in the Proceedings of the National Academy of Sciences found what other studies have found: Support for Trump was largely motivated by white fear of displacement from dominance.

As the study put it:

“White Americans’ declining numerical dominance in the United States together with the rising status of African Americans and American insecurity about whether the United States is still the dominant global economic superpower combined to prompt a classic defensive reaction among members of dominant groups.”

This new study dovetails with an analysis of millennial Trump voters published last year in The Washington Post: “First, white millennial Trump voters were likely to believe in something we call ‘white vulnerability’ — the perception that whites, through no fault of their own, are losing ground to other groups. Second, racial resentment was the primary driver of white vulnerability — even when accounting for income, education level or employment.”

The idea that the primary motivator for Trump supporters was economic anxiety was a false narrative swallowed and regurgitated by a gullible media too afraid to call a thing a thing: racial resentment.

When one accepts this rationale, the inexplicable becomes rather easy to explain.

How could anyone vote for this buffoonish character, and how can they continue to support him even as he makes a fool of himself and a mockery of America?

Simply put, Trump is one of the last gasps of American white supremacy and patriarchy. He is one of its Great White Hopes.

The distillation of his campaign message was not only to halt the rapid pace of change, but also to reverse it, to undo the Obama-izing of America and restore it to whiteness. It was also to uncouple America from globalizing influences and specifically elevate American whiteness.

To support Donald Trump was to be pro-America’s past and anti-America’s future. The whole thing was suffused with race.

I understand the extreme apprehension to accuse individuals of racism because it implies a conscious and directed racial animus that is a person’s prevailing ethos. But that extremity is only one expression of racism. There are other forms, ones that fall well short of the caricature.

What do you call a person who doesn’t reach the height of race hate but who nurses a deep racial resentment?

What do you call a person who doesn’t openly endorse racism but nevertheless knowingly benefits from it?

What do you call a person who endorses broad racial progress in theory but in practice is strenuously opposed to disturbing the racial status quo?

What do you call throngs of people working in concert, consciously or not, to defend racial primacy?

What do you call these people, among Trump’s supporters, whom studies keep identifying as racial actors, whether they view themselves that way or not?

Trump never wished himself to be a black man. He was simply expressing a white resentment of anyone encroaching on privileges historically reserved for whites. The musing Trump of yesteryear is the Trump voter of our present predicament.

Opinion | The White Rebellion - The New York Times
Posted by John H Armwood II at 10:11 AM