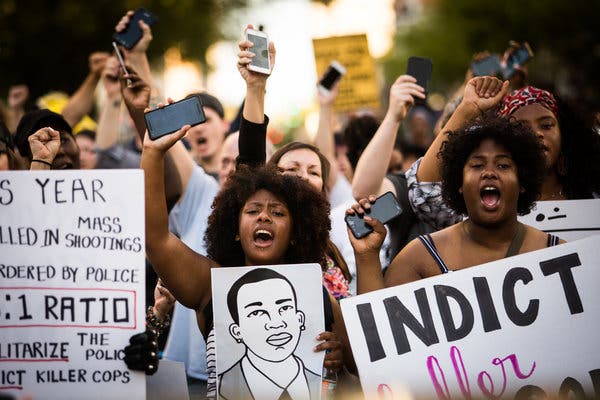 "SACRAMENTO — As the California sun burned away the haze on Easter Eve, a few hundred people gathered at yet another rally for Stephon Clark at the picturesque Cesar E. Chavez Plaza across from City Hall.

Clark is the unarmed black man, a young father of two boys, who was shot to death two weeks ago in his grandmother’s backyard.

The police were investigating a vandalism complaint when they encountered Clark, firing 20 shots at him. According to an independent autopsy commissioned by Clark’s family, eight of the bullets found their mark, six of them entering his body through his back. No weapon was found on Clark — only his cellphone.

People showed up with placards and optimism for change and justice, but dogged by the shadow of other such shootings where legal accountability has been thwarted.

A woman wipes away tears during a candlelight vigil for Stephon Clark in South Sacramento on Saturday.CreditMax Whittaker for The New York Times

I try to come to each of these moments with a fresh perspective, but I am undermined and betrayed by having covered too many of them.

I can’t escape the reality that there is a ritualization of these traumas in which the shootings serve as catalysts, a lancing of the boil, in which decades of oppression, neglect, desperation and hopelessness finds a venting valve. And what starts as white-hot rage slowly cools into a dispassionate disappointment in a system that, it is revealed, is operating as designed.

Each protest is undoubtedly about the case at hand, but collectively they are also about communities that feel abused and betrayed in a country that sees them as expendable. It is not a “local matter,” as the White House suggested last week, but a national disgrace.

Efforts at policy reform — better training, utilization of body cameras (which the officers in Clark’s case suspiciously muted after shooting him), changes in rules of pursuit — can have an effect, but they can’t fully remedy this problem.

These shootings keep happening and officers are rarely charged with crimes — and even more rarely convicted — because what they are doing is legal. That is the true American tragedy.

A man wore a portrait of Stephon Clark during a march in South Sacramento on Saturday.CreditMax Whittaker for The New York Times

In the 1989 case of Graham v. Connor, the Supreme Court ruled that the Fourth Amendment’s “objective reasonableness” standard overrode the amendment’s protections “against unreasonable searches and seizures” and even the Fifth Amendment’s admonition that no person shall “be deprived of life, liberty, or property, without due process of law.”

By ruling that an officer’s use of force must only meet the “objectively reasonable” standard while allowing that “police officers are often forced to make split-second judgments — in circumstances that are tense, uncertain and rapidly evolving — about the amount of force that is necessary in a particular situation,” the court itself laid the groundwork for the extrajudicial killings by police officers that we keep seeing. This ruling has become scripture for law enforcement.

“A generation of officers has been trained in the case’s practical meaning and has spent decades applying it to every use-of-force decision. So it has become part of law enforcement DNA, often unnoticed as it works in the background to determine our actions.”

What is “objectively reasonable” is clearly a subjective determination, and when the assessment interacts with race, class, gender and the stereotypical perception of criminality and propensity for violence surrounding those classifications, the “objectively reasonable” standard can easily become corrupted and used more as a badge of permission and a shield against liability.

In a utopian society where people did not discriminate — consciously or subconsciously — “objective reasonableness” would be a perfectly serviceable standard. But we don’t live in that world; we live in this one.

We live in a world in which, as The New York Times reported in 2016 about a study issued by the Center for Policing Equality:

“African-Americans are far more likely than whites and other groups to be the victims of use of force by the police, even when racial disparities in crime are taken into account.”

The courts have given police officers broad discretion, but they simply aren’t applying that discretion equitably. Certain people, in certain communities, are viewed as more of a threat more quickly.

This ignoring of the racial realities on the ground is not only an issue of police officers. The police are merely articulating and enforcing American ideals. Not only do police actions demonstrate inequity on the ground, but policymakers, and therefore policies, ignore that inequity, and by extension we the public who elect those policymakers ignore it.

These shootings keep happening because, on some level, America finds them acceptable, finds them unfortunate but unavoidable. We regard the dead as collateral damage in a quest for safety and civility, not registering that the countenancing of such killings exposes in us a predisposition for racially skewed cruelty and brutality.

Stephon Clark is not only a casualty of this particular shooting, but he is also a casualty of American moral paucity, race-hostile policies and corrosive jurisprudence. The sound of his body falling to the ground became just another beat in America’s rhythm of state-sanctioned tragedy."