"A day after Nancy Pelosi’s trip, China has begun military drills near Taiwan. They appear to be designed as a trial run for sealing off the island.

A day after Nancy Pelosi, the speaker of the U.S. House of Representatives, visited Taiwan, celebrating it as a bulwark of democracy, China launched three days of military exercises around the island, which its forces may use to press in closer than ever, honing their ability to impose a blockade.

A barrage of Chinese propaganda said the drills, which started at midday Thursday, would serve as punishment for Ms. Pelosi’s visit, and as a shock-and-awe deterrent against opponents of Beijing’s claims to the self-ruled island. But more than that, the six exercise zones that the People’s Liberation Army has marked out in seas off Taiwan — one nudging less than 10 miles off its southern coast — could give Chinese forces valuable practice, should they one day be ordered to encircle and attack the island.

“Use the momentum to surround,” read a slogan used by People’s Daily, the Chinese Communist Party’s main newspaper, as it announced that the drills had begun.

The six zones were chosen for their importance in a potential campaign to seal off Taiwan and thwart foreign intervention, Major General Meng Xiangqing, a professor of strategy at the National Defense University in Beijing, said in an interview on Chinese state television. One zone covers the narrowest part of the Taiwan Strait. Others could be used to block a major port or attack three of Taiwan’s main military bases, he said.

The zone near Kaohsiung in southern Taiwan, where there are crucial bases, “creates conditions to bolt the door and beat the dog,” said General Meng, using a Chinese saying that refers to blocking an enemy’s escape route.

“This is the first time that the military will hold a joint military operation around all of Taiwan island,” he said in an interview with Xinhua, China’s main news agency. “It should be said that although this is an exercise resembling actual combat, it can at any time turn into real combat.” 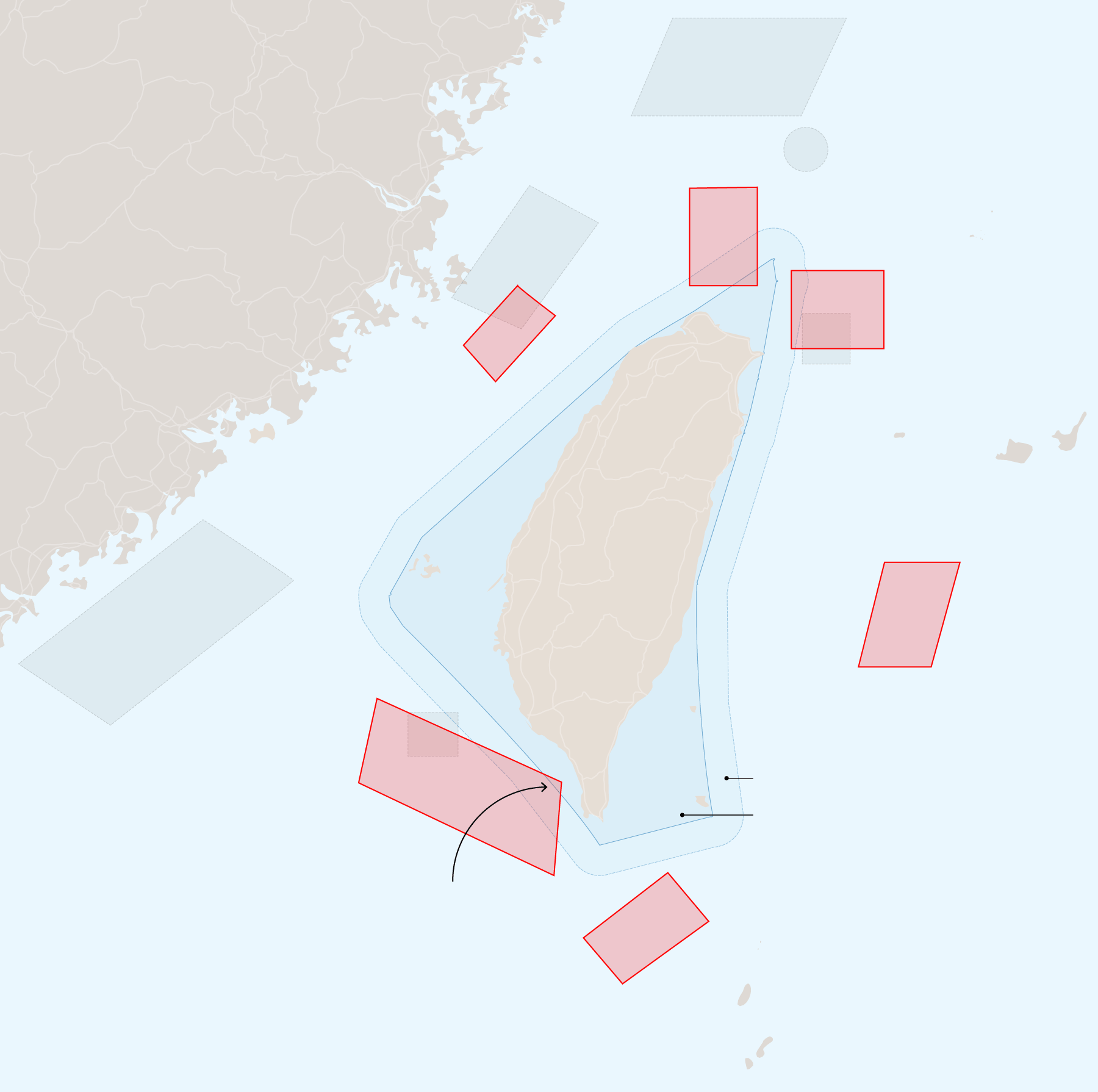 Exercises will be held in areas less than 10 miles from the Taiwanese coast.

China’s leader, Xi Jinping, has said that he hopes to eventually unify Taiwan and China through peaceful steps. But like his predecessors, he has not ruled out force, and China’s military buildup has reached a point where some military commanders and analysts think an invasion is an increasingly plausible, though still highly risky, scenario. The exercises could help Chinese forces test their readiness for that.

“They’re definitely going to use this as an excuse to do something that helps them prepare for a possible invasion,” said Oriana Skylar Mastro, a fellow at the Freeman Spogli Institute for International Studies at Stanford University who studies China’s military and its potential to attack Taiwan.

“It’s not just about the messaging,” she said. “Under the guise of signaling, they’re trying to basically test their ability to conduct complex maneuvers that are necessary for an amphibious assault on Taiwan.”

It remains unclear how close Chinese forces will come to Taiwan during the exercises, which are scheduled to end on Sunday. In one possible sign of what to expect, China’s Liberation Army Daily said on Thursday that the Eastern Theater Command was holding its own practice operations that included the navy, air force and rocket force. They were focused on “joint enclosure and control,” assaults on sea and land, and air domination operations, it said.

The Chinese military could also test Taiwan’s responses by firing into the territorial waters directly off its coast. Three of the exercise zones have corners jutting into those waters.

“It signals that, since Taiwan is part of China, it doesn’t get a 12-nautical-mile zone,” said William Overholt, a senior research fellow at the Harvard Kennedy School, referring to the sea perimeter by which Taiwan defines its territorial waters. “Taiwan either has to defend its zone like an independent country or cave.”

“We haven’t seen anything unusual in the Kinmen area, but their movements near Taiwan are more obvious,” Major General Chang Jung-shun of Taiwan’s Kinmen Defense Command said by telephone. “Some of their ships used for exercises have been detected.”

Chinese and Taiwanese military officials said that the People’s Liberation Army had fired missiles into waters off Taiwan early on Thursday afternoon. General Meng, of the Chinese defense university, hinted that the full, six-zone exercises might come together in a show of force using live ammunition in the coming days. “You all can wait and see,” he told Xinhua.

China is trying to reinforce its influence over Taiwan by upgrading deterrence after the visit by Ms. Pelosi, who praised the island’s people for standing strong against Beijing, several Chinese analysts said.

“The tendency of external forces exploiting Taiwan to contain China has become increasingly clear,” Wu Yongping, a professor at Tsinghua University in Beijing who studies Taiwan, said in written answers to questions. “The Chinese government has adopted some unprecedented military operations in response to this.”

“It’s an intentional message meant to highlight the P.L.A.’s heightened capacity to project power farther from the Chinese mainland, and it’s a visible signal that China can surround the island,” said Brian Hart, a fellow with the China Power Project at the Center for Strategic and International Studies. “It will also complicate traffic to and around the island from all sides.”

Global Times, a swaggeringly nationalist Chinese newspaper, raised the possibility of missiles being fired from the mainland into that eastern zone, arcing over Taiwan. But Mr. Hart said China was unlikely to fire missiles over Taiwan. “That would be extremely escalatory,” he said. “They will more likely fire ship-based or air-launched missiles into that area without flying missiles over the island.”

After decades of tensions and several military crises with China, many on Taiwan have become inured to threats. But even if China does not take the most potentially incendiary steps this time, experts and officials on the island worry that the operations could spark an incident — a collision at sea or in the air, or a misfired missile — that inflames tensions into a full-fledged crisis.

A monitoring service run by the U.S. Naval Institute reported on Monday that a strike group led by the U.S.S. Ronald Reagan aircraft carrier was in the Philippine Sea, some distance east of Taiwan, and that the U.S.S. Tripoli, an amphibious assault ship, was also in that area. There were no announcements Thursday of American naval ships near the Chinese exercises.

“The Chinese military exercises around Taiwan will put our national military in a very dangerous position,” he said. “They’re already at our doorstep.”

Taiwan: China’s Military Exercises Could Help It Practice an Attack - The New York Times
Posted by John H Armwood II at 8:41 AM